David Sabella is Loopin’ The Loop 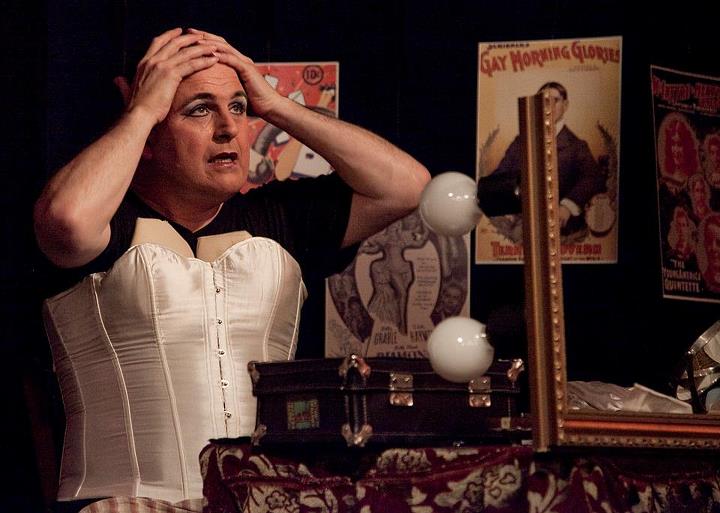 A Celebration of Kander & Ebb and the 20th Anniversary of Chicago The “orchestral” opening of David Sabella’s show, Loopin’ the Loop, bode well. The eponymous tune from the musical Chicago was played with tremendous verve, deftness and enthusiasm, setting the tone for Sabella, an artist who possesses the same in spades. Conceived, written, directed and performed by Sabella, Loopin’ the Loop is a personal view of Chicago, the longest running revival of a musical in Broadway history, as well as an homage to the two men who created it, composer John Kander and the late lyricist, Fred Ebb.

Sabella’s opening number, “All That Jazz” immediately revealed a remarkable voice: powerful and rich in tone, with a flexibility of range from a drop into baritone to high tenor to male soprano. It’s no wonder, then, that from first hearing the original cast album of Chicago in 1975, that Sabella prayed for a revival in which he could play Mary Sunshine. Wishes do come true, and his successful audition for the 1996 City Center Encore presentation of the musical was embodied in Sabella’s “Yes” from 70, Girls, 70. Tributes were a strong part of Loopin’ the Loop. Sabella is not only an engaging story-teller, but unpretentious and sweetly generous in acknowledging and honoring the contributions of others. Memories of James Naughton, who won a Tony Award for the character of Chicago’s Billy Flynn, were highlighted with “All I Care About Is Love,” while thank you’s and a loving tribute to brother Ernie Sabella (in the audience), who played Amos Hart in a production of the musical, was acknowledged by an animated, sparkling “Mister Cellophane.”

For the late Marcia Lewis, who is universally acknowledged to have gotten the Encores production moved to Broadway, he sang “When You’re Good to Mama” and a novelty number Lewis famously sang, “Nobody Loves a Fairy Over 40” (Arthur LeClerq). And since Chicago was based on real people, Sabella treated the room to the backstory of Julian Eltinge, aka Cousin Lucy, largely forgotten today, but the inspiration of Mary Sunshine. Jerome Kern’s “Those Come Hither Eyes,” an Eltinge specialty, was rendered splendidly in Sabella’s operatic soprano. The story of then President Bill Clinton’s visit to Chicago was hilariously recounted with a life-imitating-art “We Both Reached for the Gun.” Sabella’s career-success narrative – experiential, often funny, informative – was punctuated by the intensely personal: his decision to adopt children (in the audience with Uncle Ernie). Told around a Roxy monologue from Chicago and Zorba’s “Life Is” Sabella recounted a story of ups and downs, heartbreak and ultimate triumph. It was this part of Loopin’ the Loop that cemented feelings of Sabella’s kind and loving nature. Smartly paced, Sabella’s story moved on to The Visit and the role created for him, that of the blind eunuch – and the reveal that there are roles he is destined to play and those he wants to play, most of which are Chita Rivera’s. From The Visit, Sabella performed a very moving “The Only One” and a number cut from the show, with guest performer, Jana Robbins, the “trademark Kander and Ebb acerbic-bitch duet” “You Know Me.” Robbins also took a solo turn with Charles Aznavour’s “Tomorrow Is My Turn.”

“Razzle Dazzle” and “I Move On” wrapped up a show that combined top-notch artistry with substance and relevancy. Sabella’s style isn’t flash, but is steady, solid entertainment with a payoff ­– a result more easily said than done for many. Loopin’ the Loop music director and pianist, Mark Hartman, has a touch on the keys that’s magically sprightly, energetic and entirely lyrical. Marco Brehm’s upright bass was played with delicacy of bowing and ardency of plucking, while Mike Lunoe on drums rounded out a trio of superb musicality.