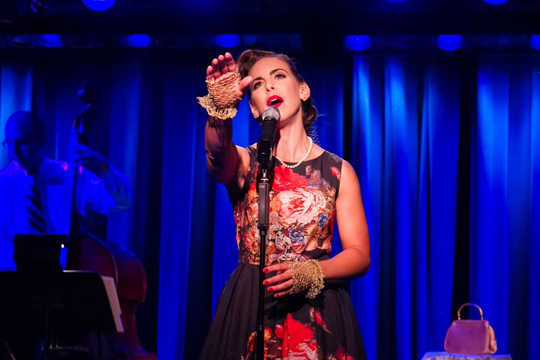 Occasionally I have the pleasure of attending a really good cabaret show. More rare than these are evenings whose components hum like Swiss clockwork. Dawn Derow’s current piece is one of the latter, an auspicious collaboration where everything contributes to top notch entertainment.

Derow takes to the WWII era as if she’d experienced it. Gravitas and glee are where they belong vis a vis historical awareness; songs well chosen and sequenced. Puckish flirt never overplays its hand. Rhythmically savvy arrangements by the late Barry Levitt may be some of the best he ever created. The show, which opens with an evocative film montage by Michael Stever (while musicians play Billy Strayhorn’s “Take the A Train”), is inventively shaped by writing which immerses us in the period.

“In 1941, Joe DiMaggio had a 56 game hitting streak… Blithe Spirit was on Broadway… a movie ticket was twenty-five cents, the train to get there, twelve cents… Your two drink minimum would’ve cost $1.50!” A medley of “How About You?” (Burton Lane/Ralph Freed) and “Let’s Get Away From It All” (Matt Denis/Tom Adair) bounces in with crinkled-nose-flirt.

Also vivaciously combined are #1, #4, and #65 on Billboard’s 1941 chart: the jivey “Boogie Woogie Bugle Boy” (Don Raye/Hughie Prince) – step-swing-step-swing in profile, as if one of the three Andrews Sisters; “Don’t Sit Under the Apple Tree” with anyone else but me (Lew Brown/ Sam Stept/Charlie Tobias); and just for fun, “Hut Sut Song-A Swedish Serenade” (Leo V. Killion/Ted McMichael/ Jack Owens): Hut-Sut Rawlson on the Rillerah, add a little brawla… (Yes, the verse makes sense.) There’ll be bluebirds over “The White Cliffs of Dover” (Walter Kent/Nat Burton.) is prefaced by the true story of Elizabeth and Frederick Noble who met as the war began, married, and 70 years later, died within days of each other in 2011. Derow reads part of a letter from the young soldier to his bride. An inspired touch. Suddenly the performer’s voice exhibits operatic training. Highly controlled, rippling vibrato adds shiver-inducing impact.

One of two highlights is the completely original treatment of Mack Gordon/Harry Warren’s “Chatanooga Choo Choo” followed by Duke Ellington/Lee Gaines’ “Just Squeeze Me”, but please don’t tease me… The first surprisingly begins with a Pardon me, boy… that oozes with seduction. Derow runs hands down her body invitingly bending towards the front row. Heat rises. Eyebrows shift…choo choo me… her tongue rolls around a cheek… won’t you choo choo me… Hips are in sync. This otherwise breezy, innocent ditty becomes a louche, undulating come-on. And it works. In spades! Complex arrangement is made to seem easily performed by skilled MD/pianist Ian Herman who replaced Barry Levitt with little rehearsal time.

In direct contrast, the next song, expected to tantalize, arrives, instead, shy and hopeful. Bobbing just a tiny bit, hands loosely on the microphone stand, Derow sings please-say you love me too… like it will break her heart if he doesn’t. Deft piano becomes her dance partner during a brief instrumental break. You can almost see music’s arm around the vocalist’s waist. One of her arms reaches up, stroking her neck, luxuriating…please…her voice quivers …when I get this feeling…The artist calls this an after-cigarette. I heard innocence. We close with a big-from-the-get-go rendition of “At Last” (Mack Gordon/Harry Warren). Just when I think Dawn Derow couldn’t get any more expansive, she does.  None of this would shine as brightly without Co-Writer Jeff Harnar’s meticulous Direction. Derow utilizes the stage and its periphery. She connects with the audience and withdraws to character introspection where appropriate. And oh, the infectious movement! In almost perpetual nuanced motion, the artist sways, swings, and sashays; a shoulder rotates, knees bend, her head tilts back, she winks, splayed fingers surround the microphone stand as if to stabilize, an exuberant arm extends to the side or over her head, a finger points, her hand fists…with all this, and here’s the craft, not a single gesture is either gratuitous or too large. There are numbers where she’s completely still- and channeling. To my mind, this is a successful highwire act.

My single suggestion is to take the ballads down a notch.

Saturday November 4 (A benefit for the family of Barry Levitt)