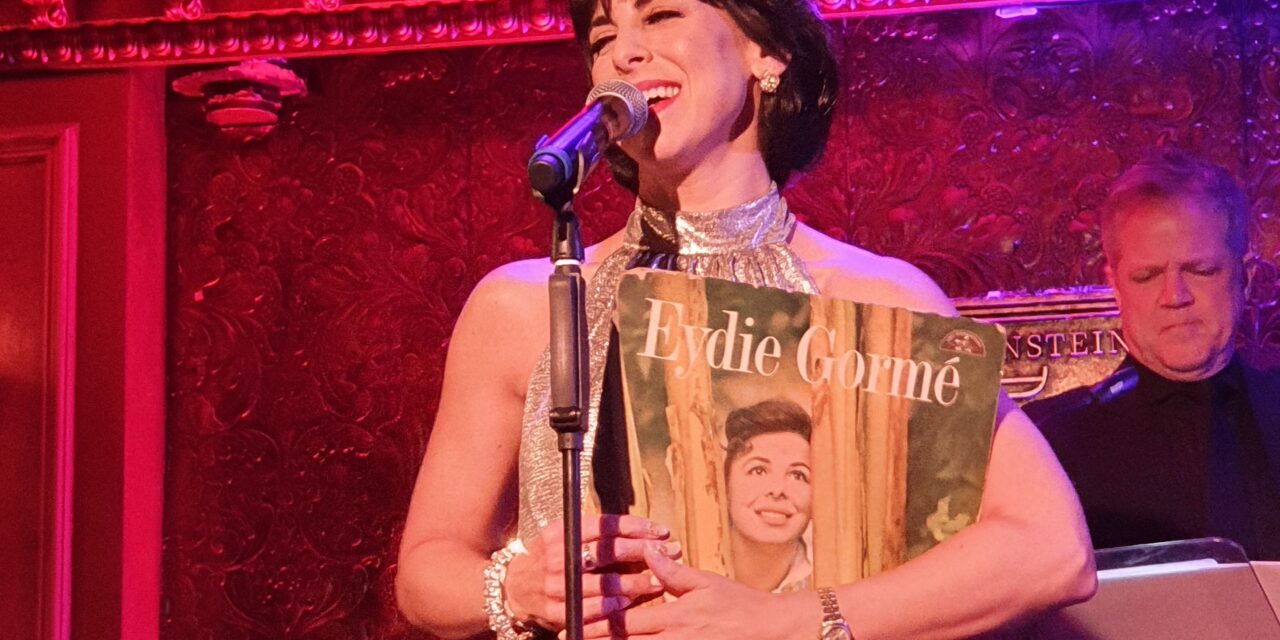 Dawn Derow is an award-winning performer and songwriter who has made a splash around New York, Provincetown and Palm Beach for a number of years, particularly with her My Ship:  Songs from 1941 cabaret show.  Tonight, Dawn made her Feinstein’s/54 Below debut with a new show, Dawn Derow Sings Eydie Gormé.  The evening was a tribute to the very popular performer, a woman who sold millions of records both with and without husband Steve Lawrence in her 60-year career.  Derow had performed this show to a streaming-only audience live from Birdland earlier in the pandemic, before New York venues were allowed to have audiences.  Accompanied by the stellar trio of Ian Herman, Steve Doyle and Daniel Glass, Derow deftly wove biographical material and jokes with superbly sung songs associated with Eydie Gormé.

Wearing a black, early 1960s-style wig, the lovely Derow made a terrific and sultry cold entrance from the bar area singing, with a wireless mic, the opening lines of “I’ve Heard That Song Before” (Sammy Cahn/Jule Styne) before arriving on the stage to switch to Steve Allen’s “This Could Be the Start of Something Big,” the huge hit for “Steve and Eydie” in 1960.  While Derow is a talented entertainer with a fine voice, Gormé had a spectacular instrument that would make for a challenging comparison.  In a brilliant move meant to thwart such comparison, Derow disarmed the audience with funny, mildly self-deprecating humor that could be described as if Dan Quayle said of himself, “I knew John F. Kennedy, and I’m no John Kennedy.”  “Sure,” Derow said, “Gormé had two Grammys, but did she win two MAC Awards?”  This made it especially easy for the audience to relate to and love her.

Derow is a dynamic performer, extremely attractive and fit, who more resembles Natalie Wood than Eydie Gormé.  Dressed in a silver halter top with black, form-fitting bells and a dazzling diamond-studded bracelet, she sang many of the songs most associated with Gormé, notably her Spanish language hits.

Gormé, a Sephardic Jew from the Bronx, was also a polyglot who made a huge name for herself in the Latin music market with a series of best-selling records with the Trio Los Panchos.   Derow, too, sings fluently in Spanish, including a medley of two of Gormé’s signature tunes with Trio Los Panchos, “Amor,” and Sabor a Mí” (both by Gabriel Ruiz/Álvaro Carrillo).  Drummer Daniel Glass added his magic on snare drum with his hands, like a bongo, to produce the right rhumba rhythm.

Derow anecdotes and trivia were aided greatly by humor.  She can be very funny.  Early on, she did an “impression” of Gormé’s mother that was very amusing.  She seemed loose, prepared, and on her game.  An early Gormé hit, “Love Me Not Just a Little, Love Me a Lot” (Moose Charlap/Buddy Bernier), showed a little of Gormé’s — and Derow’s — fiery side.  In “I’ll Take Romance” (Ben Oakland/Oscar Hammerstein II), Derow used her opera training to replace Gormé’s otherworldly high notes with a big finish of her own.

Jeff Harnar, the show’s director and himself an award-winning performer, magically appeared from the bar area singing, to join Derow on stage for the “Steve and Eydie” portion of the evening.  This reviewer kvelled hearing a couple of non-Jewish entertainers singing Yiddish in “Bei Mir Bistu Shein” (Saul Chaplin/Sammy Cahn, adapted from original Yiddish by Sholom Secunda and Jacob Jacobs).  They were also terrific together on the Steve and Eydie hit “Darn It, Baby, That’s Love!” (Joan Edwards/Lyn Duddy).

Opening rubato, with only Ian Herman’s piano accompaniment, Derow stunned with an emotional, heart-wrenching delivery of Jerry Herman’s “If He Walked into My Life” from Mame.  She sang from her heart, clearly channeling the loss of a dear, recently departed (mutual) friend and, without mentioning it, took the audience with her in her pain. . .  a beautiful moment.