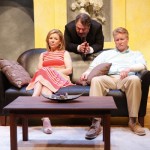 Who let the dog out . . . the phone ringer of the Canine Relations Specialist, Vadislav, who is called in to curb the violent behavior of Carrot, a rescue dog brought home by the wife, Julianne, and now part of Paul and Julianne’s family. Their 16 year old daughter (who is not present), and her father with bandaged arm from dog bites, are constantly shaking in their boots with fear of Carrot.  But is it Carrot who needs treatment or the couple filled with bark and bite?

Julianne (Michelle Hand) is an up-tight, controlling and ultra-fastidious bitchy lady who lets Paul (Steve Isom) have it when Vadislav (Jason Grubbe) appears at their Florida home at Paul’s request to help solve the problem. Vadislav, who speaks with a Russian accent, as it turns out, isn’t from Russia . . . well actually he’s from Moscow . . . Moscow, Idaho. But that’s another story.

The Canine Relations Specialist only works with the entire family present. But Julianne, who is busy with a budding career and possible TV show, is angrily running in and out of the room to take phone calls, returning only to chastise Paul and make skeptical derogatory remarks about and to Vadislav when he says they must also have daughter Brittany, who is at school, return from band practice. The fast paced comic driven dialogue, written by Daniel Damiano, keeps up the pace as Vadislav says that it is Brittany who is the object of Carrot’s hostility as he incessantly questions the couple.

As it turns out, Carrot (who we hear barking consistently off stage) was brought in to replace Wolfgang, a cat, whom Brittany loved.  Did Wolfgang run away, did Carrot eat him . . .  what about those pieces of Wolfgang’s collar that were found in Carrot’s stool? . . . we’ll never know.

But we do get to know much more about Vadislav, the catalyst, as this comic-tragic relationship of Paul and Julianne, who have lost their ability to love, unfolds. 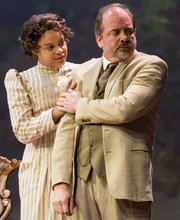 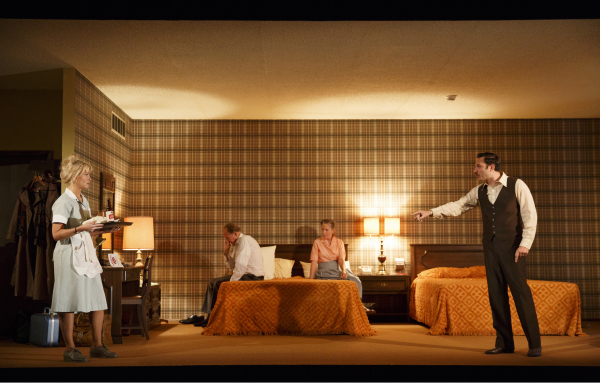 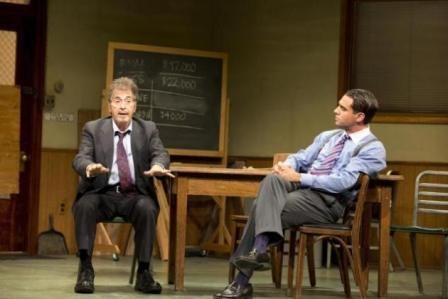