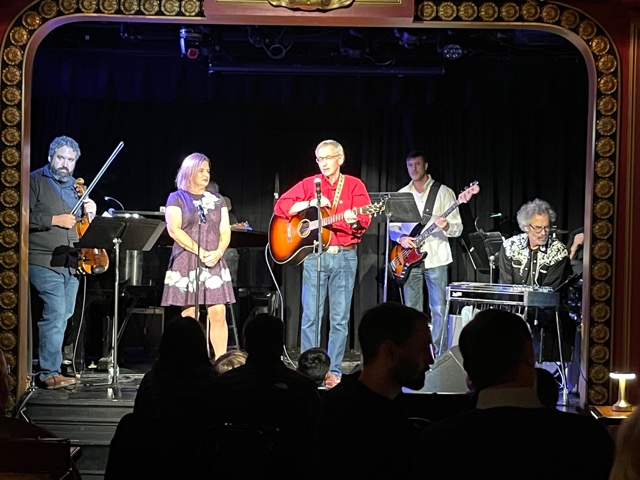 “Country came to New York City” Sunday night November 14, at the Triad Theater when Dean Benner and the Manhattan Cowboy Band stepped, or in this case two-stepped, to the stage, nearly all dressed in “Western” attire like jeans and boots.  Dean Benner, a retired Wall Street executive who hails from rural Indiana, has the sort of everyman quality and quiet manner that makes his performance seem surprising, like a country star Walter Mitty.  In a world of cynicism, it’s a breath of fresh air to watch an entertainer this authentically sincere and sweet.  Dean and his band, along with his guest singer, Christine Shuler, entertained an enthusiastic crowd of “hardened New Yorkers” with his down-home goodness and 75 minutes of pure fun, directed by Linda Amiel Burns.  The 19-song set was eclectic, with country, pop and rock hits from the likes of Willie Nelson, and Don Henley to Hoagy Carmichael, and Dean’s stories were delightful.

Dean’s strength is in his down home, sincere delivery.  With a sound similar to that of Willie Nelson, he may not have the greatest of voices and his intonation is sometimes off, but it serves the material well.  He plays guitar for some songs, though it seems more of a prop – he barely strums when he plays.  Rather, Dean delivers his songs simply, from the heart, backed by his excellent six-piece band.  With the excellent pedal steel guitarist Jeff Lampert and fiddler Matt Gelfer, the country sound was unmistakable and delicious.

“The Things That Might Have Been” (Robert and Richard Sherman), was Dean’s favorite song in the set, and he expounded on the virtues of finding a great life partner.  This was a duet with his guest singer, Christine Shuler, who has performed on all of his shows so far.  She is a very pleasant singer.  She had two solo numbers, and added good harmonies in several duets with Dean.  Her second song, “That’s How I Roll” (Jeannie Selley, Lorrie Morgan, Vince Gill), a country rocker, would have been a fine song for Elvis.

Dean’s only original, “I’ll Take New York City,” was a heartfelt ode to the city he’s called home for 38 years, and clearly missed during the pandemic.  It’s a good song, and more like these would be welcome.

For his encore song, “Where I Am Now” (Don Henley/Stan Lynch), he put on a leather cowboy hat, and with it, gained some sort of superpower, and this was his strongest performance of the night.   “I like where I am now . . . I feel at home in my own skin,” he sang in this song of self-acceptance that could have been written for him.  As he rode off into the sunset, or at least the footlights, the audience felt the same about him.

There is one additional performance of Back In the Saddle Again at The Triad, on November 21, 2021 at 6 p.m.