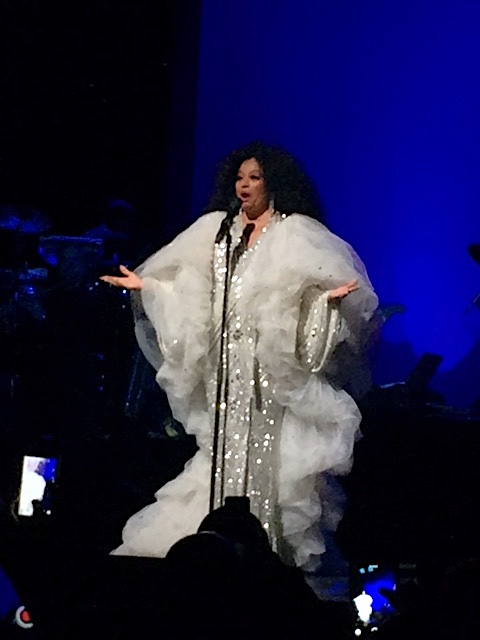 City Center was packed to the rafters with fans of the iconic Diana Ross who opened last night, April 24, to unending cheers and a standing crowd throughout most of the night of ‘Endless Memories.’

With flashing lights, video backdrop and a blow-you-away band, Ms. Ross delivered and delivered as the audience couldn’t get enough of the fabulous celebrity, and her gorgeous wardrobe!

After more than 50 years in music, film television, theater and fashion, this Academy Award nominee was inducted into the Rock & Roll Hall of Fame. She received the Grammy Award’s highest honor, the Lifetime Achievement Award. The list goes on and on but let me not forget the prestigious Kennedy Center Honor. The crowd was beside themselves as Diana Ross continued to give them what they wanted, her passion ever present. And so the memories kept pouring out – “Touch Me in the Morning,” “Upside Down,” “Ease on Down the Road,” into a Billie Holiday tribute with “Good Morning Heartache,” “Don’t Explain.” All these songs, from so many different eras – so many memories!

And she’s especially happy to keep the house lights on at intervals so she can see everyone, encouraging some of those up close and personal to join her on stage singing as the evening came to a close with what is perhaps one of her greatest songs “Ain’t No Mountain High Enough.”

Then it was over to thunderous cheers, applause and standing ovations, the band left the stage, the audience continued to cheer and cheer and, lo and behold, they all reappeared along with the gracious Ms. Diana Ross to an encore of “Reach Out and Touch (Somebody’s Hand).”