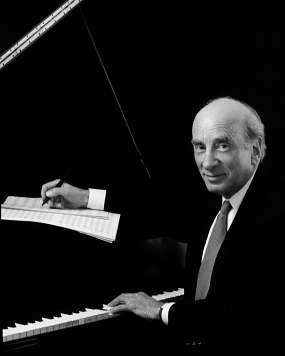 Dick Hyman is an artist who, through longevity and virtuosity, has become truly a legend in his own time. He’s a pianist, organist, arranger, music director, and composer known for an amazing versatility in his work. To experience him in live performance is to bathe in the sublimity of his mastery. If these accolades sound like hyperbole, they are not. Hyman is one of the all-time great masters of jazz piano. His opening number, Fats Waller’s “Jitterbug Waltz” proved that fact at the outset. Hyman didn’t stray too far from the melody (it isn’t a jitterbug, but is a waltz in ¾ time) running through the rippling tune with an exquisitely delicate touch (which characterizes all of his playing). The artful part was the way in which Hyman inserted variations on the theme with subtle tempo changes, clever bits of improvisation, and delightful embellishments.

Hyman is a master of stride piano, an evolution of ragtime, which Waller helped develop and popularize (stride follows a format of a four-beat pulse on the left hand, with a single bass note, and clearly defined protocols on each beat, while the right hand plays the melodic line). His stride treatment of Waller’s “Ain’t Misbehavin’” displayed the maestro Hyman’s penchant for precision – he plays remarkably cleanly. It’s said that he never misses a note, and in his 60-plus year career, the notion that it could be true is remarkable in itself. Hyman delivered two more Waller numbers, a quick-tempo “The Minor Drag,” a jazz rag (originally meant for dancing) and the medium tempo “Squeeze Me,” based on an old blues song, “The Boy in the Boat.”

It was in the next segment of numbers, all familiar Gershwin standards, that Hyman distinguished himself as a storyteller and master of moods on the keys. Even without knowing the Ira Gershwin lyrics, each piece told a tale. “Embraceable You” progressed from a quiet, almost dirge-like beginning. Picture a timid suitor approaching his love with trepidation. He achieves initial success, and then, as his confidence grows, so does the music gain in boldness until it concludes triumphantly with an ecstatic whirling waltz rhythm. Similarly, the piano mirrors the mood in “A Foggy Day (In London Town),” with a contemplative opening, a tempo change, and a progression to a bright conclusion reflecting the lyric “The sun was shining everywhere.” With “I’ve Got Rhythm” and “Lady Be Good,” Hyman was pure jazz, inserting creative improvisational ideas up and down the eighty-eights as he wove in and out of the melody.

For his last number, Hyman took a request. In response to a shouted out “Strayhorn!” he chose “Chelsea Bridge,” a 1941 mood piece of complexity that begins in minor key before integrating chromatic harmonies. True to the composer’s intention, the masterful playing of the work was a walk on the Chelsea Embankment, the water of the Thames flowing lazily by, reflecting the light and images cast upon the sometimes dancing water. Dick Hyman’s resume is long and impressive. Is there nothing he didn’t do one might rightly enquire. No matter. In the presence of the master, in real time, the past fades away with only the magnificence of genius remaining.