Did You Say You Love BELTERS? Joan Ryan Is For You! 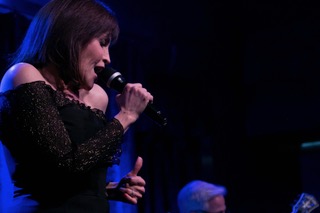 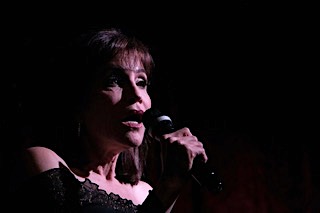 Looking at this sweet and pretty charmer with a lilting soprano voice, you’d be hard pressed to think that singer-actress Joan Ryan has a four octave range until she easily proves otherwise. A recent L.A. to N.Y. transplant, Joan is filled with funny stories about her upward climb in Hollywood – – as the notes reached explosive levels so did her presence in film and theater (L.A. premier of the hit musical ‘Ruthless’ among others!) When a High C wasn’t enough, she went for the D above and then moved on to conquer the E natural.

Joan showed us what it’s all about at Birdland Theatre on May 16, with her musical director Ron Abel and unforgettable band that included Sean Harkness on guitar, Steve Doyle on bass, Dave Mann on sax/flute and Rex Benincasa on drums & percussion.

She covered a gamut of songs from Rodgers & Hammerstein beginning with a slow “Shall We Dance” that quickly morphed into R & B; Sondheim’s “There Won’t Be Trumpets” and Christopher Cross’ “Sailing” tinged with Latin rhythm as well as a bluesy spectacular version of Mercer/Arlen’s “Anyplace I Hang My Hat is Home.” Her acting skills were front and center with “It Will Never Be That Way Again” (Joel Paley/Marvin Laird – from the musical Ruthless – you can hear Joan on the original album).

Along the way, it was evident why Ryan is known for her Belt. . . which she has now immortalized in song “Beltaholic” (Stephen Witkin/Joan Ryan/Andrew MacBean) – clever, funny lyrics that include Rock n’ Roll and had the audience roaring.

To prove she’s more than a BIG BELT, however, Ryan brought done the volume to a caressing sweet sensitivity on favorites “Move On”/”Meadowlark” (Stephen Sondheim/Stephen Schwartz). 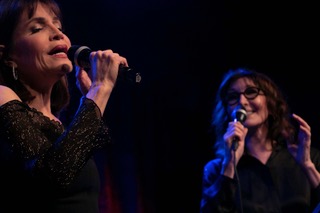 Good friend Joanna Gleason (with whom Ryan bonded many years ago in a dressing room talking about children) appeared as special guest and they duetted a loving harmonic arrangement (by Ron Abel) of Sondheim’s “Children Will Listen” blending Rodgers & Hammerstein’s “You’ve Got to be Carefully Taught.”

Lest I forget, she wowed the audience with Ricky Lee Jones’ story song – words, words, words . . .“Danny’s All Star Joint” – what a tale!

I don’t know when Joan Ryan will be doing this show again, but I sure hope it will be soon as everything about it is win, win, win!