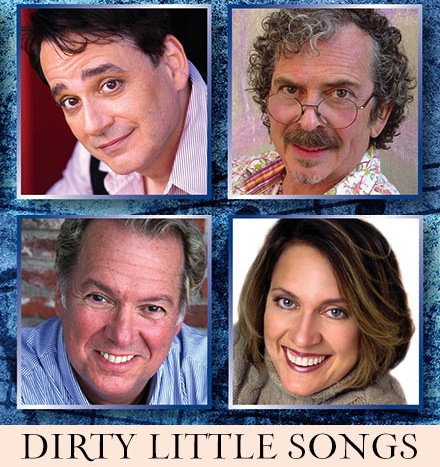 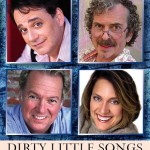 Four of cabaret’s greatest performers united on a cold night Sunday, February 16 at 9:30 PM in a show entitled “Dirty Little Songs.”  Even at that hour, the sold out house was full of cabaret royalty and fans.  Who were these performers:  everybody’s favorites Sidney Myer, Eric Michael Gillett, Carolyn Montgomery-Forant, and Jay Rogers.  At the piano and vocalizing with them often was the gifted musician-songwriter Jeff Cubeta.

The quartet began the show with a Mae West number “That’s All Brother, That’s All,” full of West witty asides and dirty innuendo, which was especially funny when the men did them.  They immediately went into Ray Jessel’s “Naughty But Nice” which is full of wild variations on anatomical words and actions which are acceptable and not acceptable.  It’s the one with the last punch line about never giving us “the clap,” instead of “applause.”

The fun kept accelerating.  Gillett and Myer and Rogers did stanzas of “I Never Do Anything Twice,” going into a trio on the last chorus interrupted by Montgomery-Forant!  She followed with her own “Lebanese Lament” about drunken Lesbian passes at ladies’ clubs.  Myer did his great “I’m In Training For You,” complete with wiry body movements!  Cubeta handed a phone to Gillett who was hysterically funny doing “The Butler Song” from “Enter Laughing.”  Montgomery-Forant topped that with a sexy food song “Gourmet Meal” by Keith Thompson.  She did a reasonably straight version of  “Cole Porter’s “Love For Sale” but then told us how the song was banned from the radio,  stating that Danny Kaye broke the ban by changing one word and sang it on his program.  The spot shifted to Gillett on a platform in the house and he sang the altered version which was a laugh riot!  I’m not going to reveal what word was substituted because I am sure everyone is going to want to see this show when it’s repeated and it would be a terrible spoiler!

Myer performed his wild “Pheromones” song with even greater gusto and Gillett did Noel Coward’s racy “Uncle Harry’s Not A Missionary Now.”  Rogers topped that with one of my favorites, Alan Chapman’s “Come Te Gusta Mi Pinga?”   It’s the one about the dirty English words sounding better with a “Montalban” Spanish word, of course ending it with a wild “Olay!” He followed with “Dresser Drawer Blues” ending up prone on the floor!

Flanders and Swann were represented with the drunken seduction song, “Have Some Madeira, My Dear” with Gillett grabbing a glass of wine and downing it during the number.  Myer reprised his funny Harold Rome song “When I Grow Up,” about the kid wanting to be a G-Man so he can go “Boom Boom Boom” shooting down culprits with great bump and grinds.

The quartet finished up with George Winters’ “Drifted” and then decided they had to do some contemporary “Push and Shove” numbers which included snatches of songs like “Pet Me Poppa” until Cubeta forced them into “Anything Goes,” which suited each of them!  This was the wildest funniest show of the season and if it’s repeated it will sell out every night because the word of mouth afterwards was ecstatic!