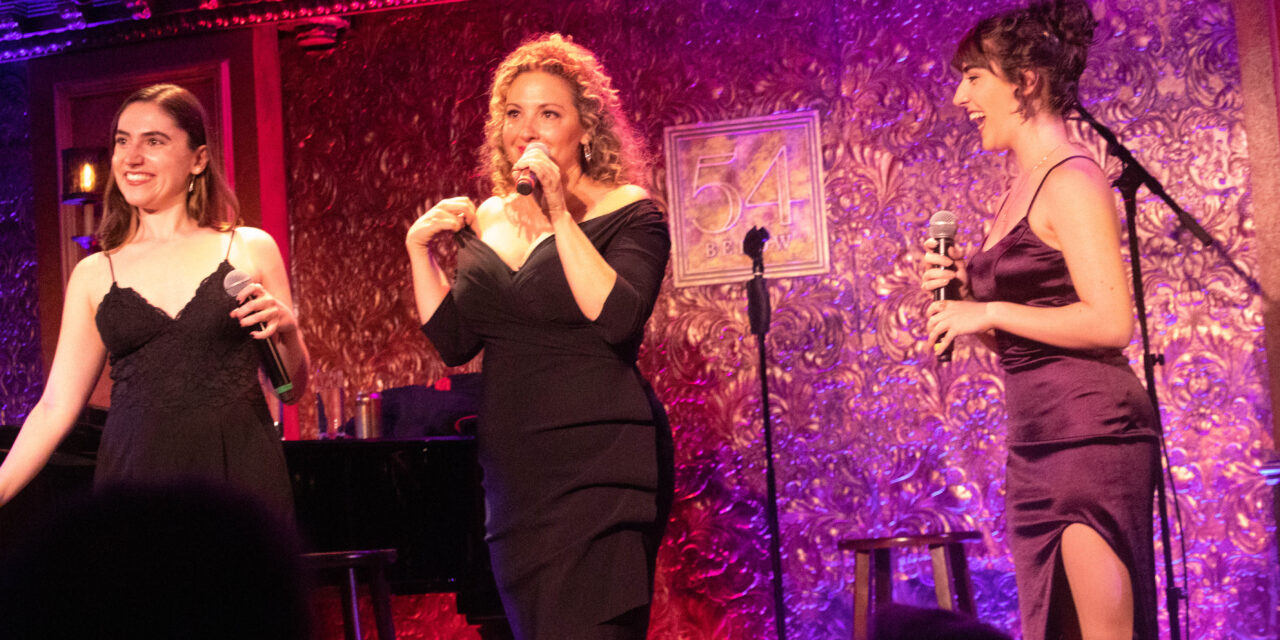 Actress and singer Donna Vivino is a successful performer since early childhood, and most notably played Elphaba in Wicked.  At 54 Below, Donna performed with her sisters, Natalia and Antonia, for the first time.   Natalia has also played Elphaba in Wicked, making them the first sisters to play the part.  Antonia recently played Young Elsa and Anna in Frozen at Disneyland.

Donna and her sisters are from an extremely talented and versatile family.  Their father is Jerry Vivino, a woodwinds (sax, clarinet and flute) player who has worked with everyone from Franki Valli and the Four Seasons to Tony Bennett.  Jerry’s brother Floyd (TV’s “Uncle Floyd”) is a comedian and pianist, and brother Jimmy was the guitarist for the Conan O’Brien band on television, and is a multi-instrumentalist and singer with The Fab Faux.

In La Mia Famiglia, Donna weaved delightful stories, family videos and photos into an eclectic collection of show tunes and pop hits.  The evening opened with an adorable video montage of clips of a very young Donna in home movies, a childhood Coke commercial, and ending with her appearance on Late Night with David Letterman as Miss Liberty at age 7.  The star made a funny entrance, parading on stage holding a can of Coke and wearing the same Statue of Liberty headdress.  She instantly owned the crowd, including those who were not part of the large contingent of family members and friends.

The whimsical “Here I Am” (David Yazbeck, from Dirty Rotten Scoundrels), was as much a declaration as it was Donna’s opening number.  She has a warm, strong voice and excellent pitch, and has a total command of her instrument.  With strong accompaniment from Lon Hoyt, her big finish raised the energy in the room.

Her father, Jerry Vivino, played in the pit of the 1984 jukebox musical Leader of the Pack.  She brought out a beautiful journal she once used to write down the lyrics to songs she loved.  She exclaimed, “I stole his show jacket!” and put this jacket on before calling her father to the stage to play flute on “When She Loved Me” as she “read” the lyrics from the journal.  She dedicated the song to her grandmother, whose photo was displayed on the monitors.  It was a beautiful, emotional moment.  (Proud papa Jerry later told me of his reluctance to play, and that it was all he could do to get through it without tearing up.)

Donna’s sisters joined mid-song on a bluesy-rock rendition of “I Put a Spell on You” (Jay Hawkins and Herb Slotkin).  Antonia and Natalia both appear to be in their 20’s, considerably younger than Donna.  This is relevant when noticing distinctions between how today’s young Broadway performers approach a song compared with those of previous eras, particularly today’s fairly ubiquitous pronunciation of certain sounds in a manner not yet prevalent when Donna was getting her vocal training.

Donna gave the stage to Antonia, who had the perfect set up for “Disneyland” (Marvin Hamlisch/Howard Ashman, from Smile).  Antonia played characters at Disneyland, a dream job for many a young girl, and “Disneyland” relates a young girl’s seemingly unreachable dream of finding her way to Disneyland.  The song is increasingly emotional, and Antonia delivered, reaching deep inside to take the audience to the song’s powerful conclusion.  Natalia then joined Antonia for a duet of “I Will Never Leave You” (Henry Krieg/Bill Russell, from Side Show).  With a similar timbre, their voices blended perfectly.

Donna returned (“Now get off my stage!”) for an Alanis Morrisette medley.  She once again “read” her lyrics from her journal and sang a capella, withy funny asides of Alanis’s “stalking lyrics,” and segued into Madonna’s “Live to Tell.”  Her emotional resonance here was most palpable.  The star brings the skills of a seasoned actor to instantly summon, with authenticity, whatever emotional tone, or even pathos, might be required for the song.

Relating growing up Italian (and part French) in the predominantly Jewish town of Fair Lawn, New Jersey led to her hilarious “Fran Drescher Song“ called “Just Be Who You Are” (Amanda Green), performed as a spot-on impression of Fran Drescher.  Eventually, she found herself singing this for Fran personally, who asked, “Do I really sound like that?  OF COURSE I sound like that!”  Later, she performed brilliant celebrity impressions, reimagining Sarah Jessica Parker, Jodie Foster and Celine Dion in Wicked.

Dillon Kondor, the guitarist for Dear Evan Hansen, joined for several songs, notably “So Big, So Small” from Hansen, which especially resonated with Donna as a single mother.  With Dillon’s delicate, impeccable playing, this number provided the biggest emotional wallop of the evening.

With both Donna and Natalia having played Elphaba In Wicked, they did not pass up the opportunity for a double Elphaba duet of “Defying Gravity” (Stephen Schwartz).  Luckily, worlds did not collide.  Appropriately, Donna’s “final” song was “Over the Rainbow” (Harold Arlen/Yip Harburg), which sounded surprisingly fresh in her hands. With the audience now “over the moon,” an encore of Fleetwood Mac’s “Landslide” delighted with sumptuous, three-part harmony.

If this sister act makes a return engagement, you will fall in love with the Vivino family.
Follow Donna Vivino, Natalia Vivino and Antonia Vivino on Instagram:
@donnavivino, @nataliavivino and @antoniavivino, respectively