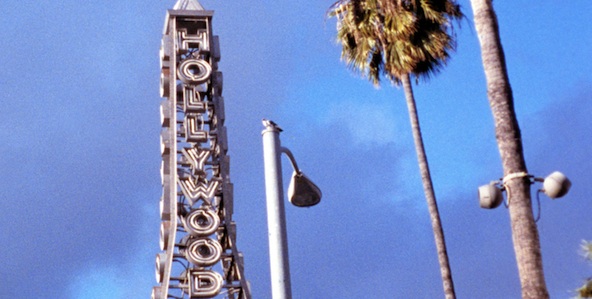 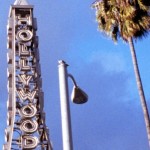 Recently a friend asked me to name my favorite scenes in movies set in Los Angeles so she could visit the places where they were filmed. I drew a blank. I could think of tons of places to visit from films set in New York but nothing jumped to mind for Los Angeles. Shortly after, I took in Thom Andersen’s nearly three-hour video essay on films shot in Los Angeles. Los Angeles Plays Itself is a play on LA Plays Itself, a highly regarded 1970s gay porn film in the permanent collection at MoMA. Clips from that film, along with dozens of more recognizable mainstream films set in Los Angeles, make up the footage of the documentary while Andersen’s reproaching and professorial voice narrates.

The first part of the film addresses Andersen’s displeasure with how Los Angeles is portrayed in films. He points to the shapelessness of the city and how few identifying landmarks there are in comparison to New York City, which perhaps explains why I could not sufficiently address my friend’s inquiry. Some amusing sections point out continuity errors in films with back-to-back scenes set in completely different locations. He focuses on a few recognizable interiors and how they have been transformed in films throughout the years including the alternately antique and futuristic Bradbury Building and the ominous Frank Lloyd Wright Ennis House. Andersen marvels and sighs at the transformative nature of the buildings.

The second part traces how Los Angeles films have exposed the city’s infrastructural flaws, specifically focusing on racial inequality, throughout the years. Two fascinating segments showcase the fictitious stories of corruption in Los Angeles’ development in the first half of the twentieth century in Roman Polanski’s Chinatown and its popular parody Who Framed Roger Rabbit?. Andersen wisely saves the beautiful and terrifying footage of the films from The L.A. Rebellion film movement for the end. The haunting black-and-white imagery from films like Haile Gerima’s Bush Mama and Charles Burnett’s Killer of Sheep stands in stark contrast to the clean and glamorous footage from Billy Wilder’s Double Indemnity, which is extensively shown in the first part of the film.

Andersen’s film premiered in 2003 and a ten-year anniversary restoration is currently playing with small changes from the original. Andersen “didn’t see the need” for an update and he’s right. The film’s second half is all the more relevant and alarming today. Due to rights issues with the film footage presented, the film is not commercially available and will be playing at the IFC Center through Thursday.