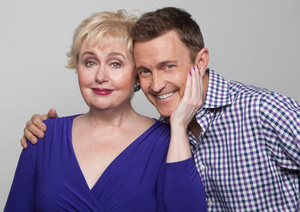 Although the two phenomenal singers, Sally Mayes and Jeff Harnar, generated no fireworks, there was a great deal to savor for the cabaret connoisseur in their Double Take at Birdland Jazz Club. The display of consummate technique combined with their sheer joy of singing, under the extraordinary musical direction of Alex Rybeck, made their show feel like a special event.

Double Take balanced wistful with pizzazz, jazz and revealed their wide ranging taste in music. If all the performing talent on the Birdland stage weren’t enough, several of the numbers were written, or co-written, by Ms. Mayes, Mr. Harnar and Mr. Rybeck, like “Double Take,” a pleasantly swinging ditty about the slightly odd couple nature of their partnership. Ms. Mayes showed deeper emotions in “Somebody Sent Me An Angel,” a sweet homage to her husband, Bob Renino who just happened to be playing bass in the show.

Of course, they didn’t neglect the classics. Their duet of “I Don’t Think I’ll End It All Today” (Arlen/Harburg) from Jamaica had a wonderful winking sassiness while the “Just In Time” (Styne/Comden/Green) had just the right palsy-walsy quality. The combination of “Don’t Get Around Much Anymore” (Ellington/Russell) and “Saturday Night Is the Loneliest Night” (Styne/Cahn) were mined for their rueful sentiments.   In the same mood, was “Too Long At the Fair” (Billy Barnes) sung with heartbreaking clarity by Ms. Mayes.

Mr. Harnar sang Mr. Rybeck’s silly “Why Did You Have Split” about a woman with multiple personalities who’s causing heartbreak and angst. Also hilarious was “Metropolitan Scat” (Michael Duff/Cheryl Coons) which took classical opera tunes down a peg or two. Ms. Mayes found her opera voice and used it to great comic effect.

They closed with Ann Hampton Callaway’s “At the Same Time,” a “we-are-the-world” type ballad, about synchronicity and love, and the jazz standard “That’s All” (Alan Brandt/Bob Haymes), given a swift, very cool reading.

The singing throughout was terrific and the camaraderie charming.

The terrific band was completed by Dan Gross on drums, who worked hard making all sorts of sound effects, adding a great deal to the sophisticated arrangements (mostly by Mr. Rybeck).