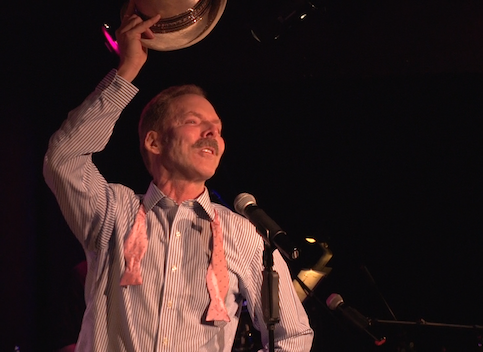 Tuches oifn tisch? That means “Shall we lay our cards on the table?” in the most vernacular Yiddish. OK? OK. Then, immediately select your preferred means of intergalactic communication: iPhone, android, landline, Morse code, tom-toms, smoke-signals or SETI launched radio beams—and make a reservation this very minute for the third performance of Dr. Bradley’s Fabulous Functional Narcissism, The Solo Show, Thursday July 26, 7:30 pm, at Don’t Tell Mama where I was awed by the Doctor’s totally unfiltered self-revelation in June. To use a word I’ve never before used about anyone or anything, both he and his show were perfect! (I’d be back re-kvelling for Dr. Jones in July if my only child—who’s everything his father would have been if he’d only had me as a mother—hadn’t lured us into joining him and his’n in Hawaii that week! On the island with the erupting volcano? Aloha, Oy!)

Don’t shillyshally. Do like I tell you to avoid the limbo of the waitlisted until himself, Mama’s booking impresario, (Everybody Loves) Sidney Myer, materializes, hoisting a miniscule cocktail table over his head on muscles which have lain fallow since 1998, and somehow squeezes it and you into a banquette. In June, Dr. Jones’s audience was dotted with celebrities. I faced the posterior noggin of the multi-award-winning John Lithgow, and sat nether cheek-to-cheek with cabaret luminaries Jeff Harnar and his partner in Sondheim, KT Sullivan. Ms. Sullivan, the artistic director of the Mabel Mercer Foundation, deserves endless kudos for her subtle and bold direction of Dr. Jones’ masterpiece. Is he worth the wait? He is indeed! To marvel at the most complex, detailed, thought-provoking, whimsical, articulate, accurate, truthful and honest, lively, hilarious and touching 70-minute-long autobiographical adventures of a stage-struck child who became an eager-to-please theatre queen, survived a decade in a Broadway hit musical, overcame envy, grandiosity, a proclivity towards murder as well as a penchant for substances sniffed in the night to become a respected psychoanalytic clinician who still enthralls with his ability to entertain, tap dance and sing. And oh!, those photoshopped abs, biceps and triceps! Best of all, his narcissism has a happy ending. He and his true love not only find each other, but have remained together for lo these many years.

Jones introduces himself as a sensitive soul via double entendre phrases penned to a Richard Rodgers tune by another vulnerable gent, Lorenz Hart, and originally sung by that total lout, Pal Joey . . .

Even though I’m mild and meek when we have a brawl,

If I turn the other cheek, you mustn’t kick it at all.

And then we’re taken back to 1963 when six-year-old Master Daniel Bradley Jones, watching Oliver in the mezzanine of the Imperial Theater, is stung by the show biz bug and his life is never the same. At recess, he obsessively plans the assassination of the lad playing Oliver, sure he could create a superior interpretation of that iconic workhouse brat. He felt the same angst when he saw Frankie Michaels warbling to Angela Lansbury’s Mame. Fortunately, instead of murdering anyone, he turned those feelings into a teensy, tiny little personality disorder which he’s been living with, for better or worse, for the better part of the last 60 years. But first, another musical interlude, in which Jones sings “Life Is Absolute Perfection,” from Bernstein’s Candide. His songlist includes Broadway gems, lots of Sondheim and Rodgers père and fille, Hart, Arlen, Ira Gershwin, Lieber and Stoller, Kitt and Yorkey and of course every analysand’s coda, “Feelin’ Too Good Today Blues.” When he sings, each letter of every word seems to pass from his lungs to his heart through his brain before being uttered by his lips. It’s simply uncanny and incredibly moving.

When the six-year-old became an 18-year-old “with a hole in his soul,” and “absolutely no life or interpersonal skills,” he moved to New York with “his dance belt, a pair of tap shoes and a load of defensive grandiosity.” The observations and quips Dr. Jones selects to describe his past are so painstakingly deliberate that omitting a comma seems unseemly. Here’s a rundown of the contents of some ensuing episodes:

His acknowledgement of love for his longtime partner, Dr. John via “Loving You/Sorry Grateful,”was  one of the most tender but most unsentimental moments I’ve been privy to in my life.

Finally, a well-deserved standing ovation for KT Sullivan’s flawless direction, and praise for Music Director Chris Gurr and his Freudians: Alden Banta on woodwinds, Jacob Silver on bass and Zack Eldridge on percussion.

Here’s where Dr. Bradley Jones will be appearing locally during the upcoming months. Why so few? The man has an important day job. I only wish I was still crazy enough to be analyzed by him.