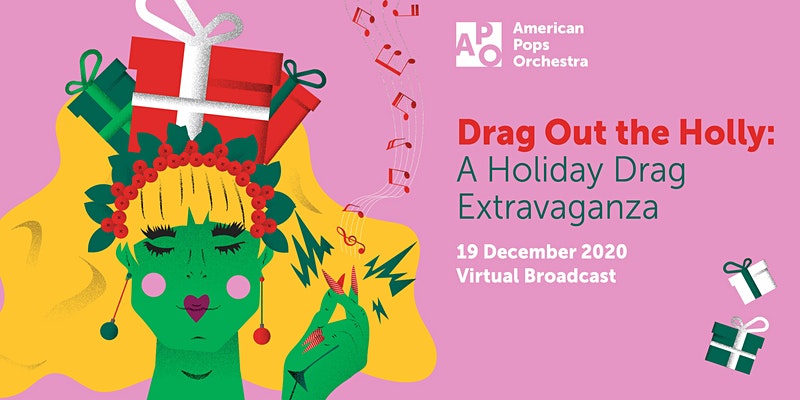 The Actors Fund, a national human services organization for everyone in performing arts and entertainment, announced today the premiere of The American Pops Orchestra’s(APO) Drag Out the Holly: A Holiday Drag Extravaganza onSaturday, December 19, 2020 from 9:00PM – 10:00PM ET via a free private broadcast. Drag Out is offering 50% of donations in support of The Actors Fund for anyone using the “ACTORSFUND” code to make their online gift. The star-studded performance—filmed at Meridian International Center—brings together celebrated LGBTQ+ performers and The American Pops Orchestra to spread holiday cheer through their renditions of classic holiday songs from “Santa Baby” to “Have Yourself a Merry Little Christmas.”

To register for a private link, please visit: https://www.eventbrite.com/e/drag-out-the-holly-a-holiday-drag-extravaganza-tickets-129780433771.

Filmed at Meridian InternationalCenter in front of a small, socially-distanced live audience and under strict COVID-19 mitigation procedures, Drag Out the Holly features performances by: RuPaul’s Drag Race contestants Alexis Michelle, Jujubee, and Peppermint, as well as NYC queen Lagoona Bloo. The four queens are joined by singer-songwriter Bright Light Bright Light and Pennsylvania Representative Brian Sims to perform their own spin on holiday classics with The American Pops Orchestra. Included within the broadcast are various interviews with the featured artists highlighting their coming-out process and what support systems assisted them throughout their journeys.

This broadcast can be viewed free of charge and donations are encouraged to support APO and The Actors Fund. Use the donation code “ACTORSFUND” to allocate 50% of your donation to help those in need in performing arts and entertainment.