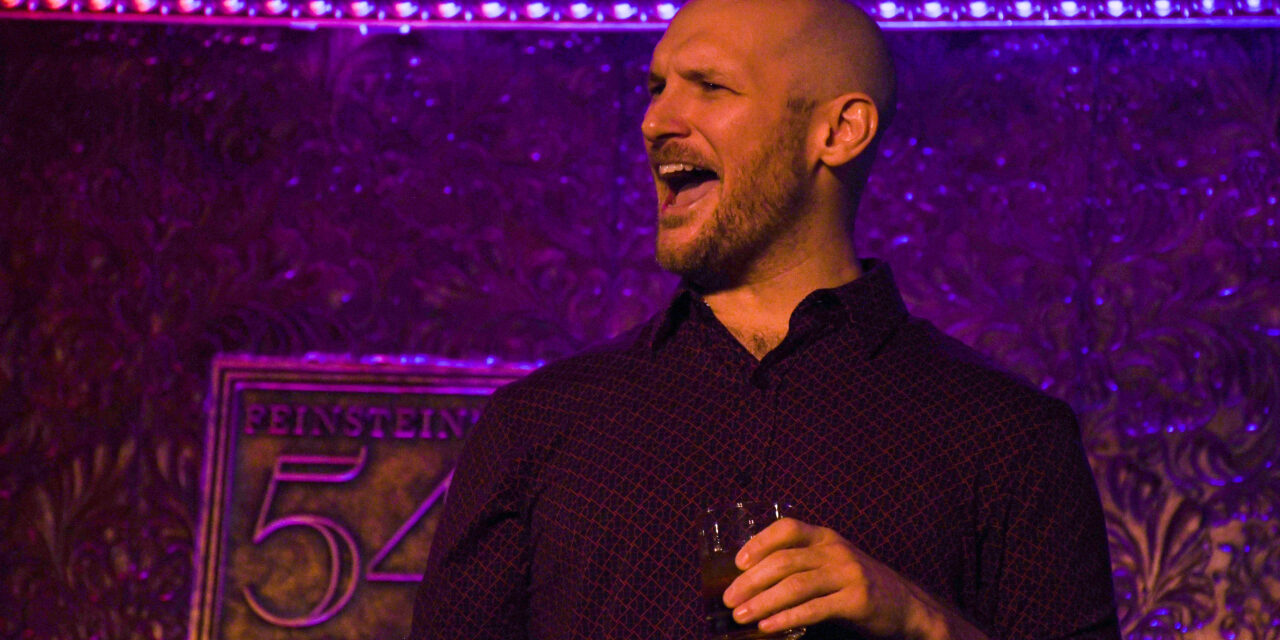 One Last Time (For Now)

In a bittersweet night at 54 Below, the popular and insanely talented Drew Gasparini, a singer-songwriter, played his “last” concert at the club (“for now”) after a decade of shows, where he also debuted some 250 of his songs over the years.  The show was entirely sold out, and was also livestreamed.  Drew is working on a couple of huge projects that make even sporadic shows impractical, including the long-awaited The Karate Kid — The Musical, for which he wrote the score.  This show just debuted in St. Louis, and has a significant shot at hitting Broadway by 2023.  Several of its stars, including Jetta Juriansz (Ali Mills) and Jake Bentley Young (Johnny Lawrence), were featured in this performance.  Ralph Macchio, the star of the original movie and the current Netflix hit “Cobra Kai” was quoted recently about his hopes for the musical, “I want to be humming Drew Gasparini’s tunes on the way to the parking lot.”  This reviewer has been humming Drew’s tunes since first encountering him in 2007 at his first musical, “Crazy Just Like Me,” in California.  (For our BlogTalkRadio interview of nearly a decade ago, click here.)

Following his usual format of a “Gasparini sandwich,” the star opened and closed the show solo, while a parade of young Broadway and up-and-coming stars performed some 13 songs written by Drew, including fan favorites and new songs.  “Let’s start with a song of hope,” he declared, sitting at the piano to sing “When the New Day Comes.”  It was the kind of song you might hear from Randy Newman.  While Gasparini loves to have other singers perform his songs, he has a beautiful, powerful tenor voice, with the ability to parse (his own) sensitive lyrics like no one else.

Drew met his first guest, Raymond J. Lee, when they worked together for the 2019 Super Bowl Sunday stunt “Skittles Commercial:  The Broadway Musical,” a one-off, 30-minute musical for which Drew wrote the music.  The tenor performed a strong “I’m Not Falling for That,” a rocker.

Drew’s very pregnant sister, Kasie, sang the story song he wrote for his father, “George’s Song.”  (He performed the song himself at his rare guest-free show here in 2021.)  Both of their beaming parents were in attendance.

For years, Drew has utilized several of his best friends in show biz for “The Morons,” today’s equivalent to Sinatra’s “Rat Pack,” a raucously funny and obscene trio of Broadway stars Alex Brightman, Andrew Kober and F. Michael Haynie, who roast Gasparini in song and patter.  Their return for this show was the most requested fan favorite “by far,” and no wonder.  “Guy Like Drew Redux” was like a five-minute, musical Friar’s roast with three-part harmony.  Insisting it was Drew’s birthday over his protests, they led the crowd in singing “Happy Birthday” to the star, with the help of the band and the club’s lighting director. (For the record, Drew’s birthday is April 20.)

Samuel Cadieux, an actor and singer with smoldering blue eyes, flaunting his muscular physique in a tight black tee shirt, sang the introspective ballad “Disaster” The long, caesura pause between “I’m…” and “a disaster” created a tension that made the rest of the song an emotional payoff.  It is the raw confession to a lover that might have been a love letter that was written but never sent.

Eric Hölljes, a platinum-selling songwriter who cofounded the band Delta Rae, was a last-minute addition when a scheduled performer had to drop out.  The tall, blond singer shared that he recently fell madly in love, to the point that he can’t get anything done, not even his songwriting.  This emotion helped propel one of the most powerful performances of the show with “I Wish I Never Met You,” a stunning love song with a melody reminiscent of the Sinatra classic “All the Way.”  The lyrics resonate with anyone who has experienced the kind of overwhelming love, or loss, where one cannot go a moment without thinking about that person.  When Eric sang “I wish I never met you, ‘cos I can barely write a song without starting to write down your name,” it became his song.

Much like “I Wish I Never Met You,” Maleah Joi Moon, a performer with “the greatest name in show business,” was a show stopper with “I Loved You Too Much.”  A luminescent stunner in beauty and talent, with a rubato approach for much of the song, she reached into her very soul to express the deep pathos of this lyric. Maleah’s acting and singing were superb.  Goosebumps.

After Keith White joined Drew on stage for a wild, semi-rap song with an unprintable title and great audience participation (with Andrew Resnick on piano), Drew closed the show solo, with just his guitar, for “Raise a Glass.”  He made an emotional speech, thanking the audience and the venue for all the support he’s received.  Drew Gasparini will be sorely missed on the New York cabaret scene (“for now”), but the big time awaits.

Learn more about Drew Gasparini at https://www.thedrewgasparini.com. For more great shows at 54 Below, visit https://54below.com.

Photos by Andrew Poretz except cover and group shot courtesy of the artist.