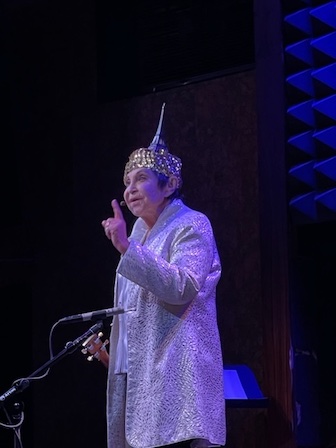 In 1953, comedienne and D’Yan Forest predecessor, Belle Barth (1911-1971), was arrested and fined $25 for her “lascivious” act. It wasn’t the first time this risqué comic encountered the law; there were many other cases against her, including a lawsuit by two school teachers that claimed Barth’s act had morally corrupted them and harmed their health. Fortunately, we’re beyond that Puritanical thinking, and D’Yan Forest, in the tradition of naughty and bawdy comedy, has not only escaped this fate but has a fiercely devoted following that revels in her saucy act.

Forest has been on a wild ride of adventure for most of her 88 years—and she reveals much of it in her Swinging on the Seine appearance at Joe’s Pub. With emcee-collaborator, Stephen Clarke, and ukulele in hand, the petite firecracker packed 60 years of escapades into 60 minutes of a show. At the end of it, through much humor, delight and candor, it was wonderfully clear that ageism isn’t a word in her vocabulary. Age, she quipped, has perks that youth does not—namely experience, a pension and a house in the Hamptons.

Forest’s exploits begin in Paris in 1955. Prior to that seminal year, life was preparation. At a precocious age 4 she started performing recitals in her parents living room in Boston, leading to playing the ukulele—and trumpet and drums and piano—and, why not? glockenspiel. And while Swinging on the Seine is exactly about that kind of swinging, Forest has, in fact, done a lot more in her long life as an entertainer, including playing and singing in cabaret rooms and piano bars internationally and working in film, theater and television as an actor. The Guinness Book of World Records has officially proclaimed her as Title Holder for Oldest Female Comedian in the World, but she only started performing stand-up after 9/11 to “bring more laughter into the world.”

Retirement is another word not in her vocabulary, so as we arrive at Swinging on the Seine, there’s a lot of mischief to talk about. Her theme song for the show, “Swinging on the Seine,” sung to the tune of “Singing in the Rain,” bookends the show. In 1955 Forest went to Europe and enrolled in the Cite Universitaire de Paris, went back to New England and in 1963 returned to Paris to “become French.” She left behind a failed marriage in Boston, attributed to the sexual dysfunction of a boring husband, paired with attitudes that had already been liberated in the City of Lights. Forest found her way into the glamorous and scandalous nightlife of the era, to underground sex clubs and the swinger’s scene. She says her life was like watching a Fellini film and then she realized she was in the film!

Of many songs dotted throughout the show, she sings a few bars of the 1959 Edith Piaf hit “Ombre de la Rue,” aka “Milord” (Marguerite Monnot, Georges Moustaki) and encourages a sing-a-long. For audience members who don’t know French, she teaches them, with the result that all the lyrics become “la, la, la, la.” Later, she does the same with a reference to Marlene Dietrich and her hit “Lili Marleen” (also “Lily Marlene”) in which the German lyric becomes a string of “ja, ja ja.” We learned that Forest discovered she really, really liked sex and was willing to be open to experience of all kinds, with males and females. She sings to the tune of “Bye Bye Blackbird,” “Bi-Bisexual,” to drive home that point. Her wit is keen and her timing perfection.

The multi-talented Forest has also been a writer, contributing to Huffington Post, Gay Star News and Frenchly US, among others. With Clarke she recently published a memoir, I Did It My Ways. The odds are, like her delightful, spirited show Swinging on the Seine, this literary counterpart is one heck of a fun, good read.