Ebersole and Stritch Sing of Snow and Memories at Birdland 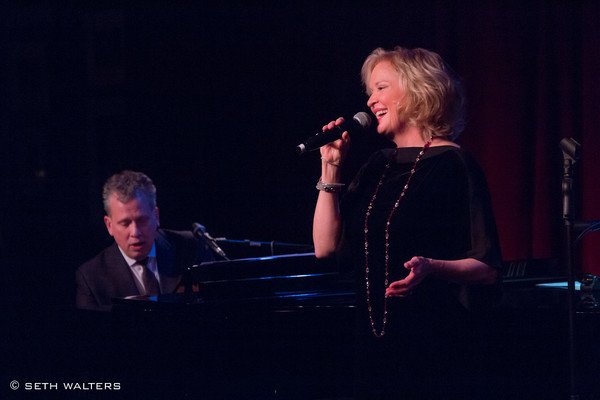 Musicians who have played together for years reunite for two Birdland performances this December. Winter tunes, holiday tunes, tunes of remembrance and family and loss. Billy Stritch at the piano with a few choice and delicious vocals is both support and full-fledged stage partner to Christine Ebersole, who can diva with the best of them. Here Ebersole is in luscious restraint and occasional belting wonderment, blending vocally, sometimes seated and bouncing in support of her assembled fellow musicians, sometimes providing full throated vocal hymns to us, to the lyrics, to the season.

Before the show began, I played a guessing game with myself about the set list. Might we hear “Let It Snow” or “White Christmas” or the rare-ish “Merry Christmas” from In the Good Old Summertime or “Have Yourself a Merry Little Christmas” or “Winter Wonderland”? What I discovered was that, of course, the professionals assembled a set list with many more layers than these snowy Christmas tunes alone, gave us just one of the Garland gems, and provided others beyond my imagination.

Ebersole commented on her multi-year absence from the Birdland stage, and the “many exciting changes in the world since then,” to chortles from the packed house, the closest to political commentary we got this evening. We’ve had a wild ride of a year, and the musical arms of these solid musicians embraced us with a lyrical purity. We felt safe and eager to hear the blend of holiday and secular offerings.

Stritch at piano, Tom Hubbard on bass, and Ray Marchica on drums got the party started with an instrumental, swaggering jazz tune. Ebersole joined their tight harmonics with a swinging version of Irving Berlin’s “I’ve Got My Love to Keep Me Warm.”

Next up was the wildly overworked new Christmas 1994 tune by Mariah Carey, “All I Want for Christmas Is You.” While Carey (and her emulators) approach this song as a bouncy party tune in the vein of “I Saw Mommy Kissing Santa Claus,” Ebersole found depth, romantic connection, and an adult approach to the lyrics.

The penchant for twisting convention continued with a delectable bossa nova approach to “My Favorite Things”(Rodgers and Hammerstein), and a terrific version of the 1950 tune that Kay Starr popularized, “The Man with the Bag” (Irving Taylor, Dudley Brooks, Hal Stanley). The show title tune “Snowfall” deftly blended melodic lines.

Stritch and Ebersole have been weaving precise harmonies and bouncy joy in Rodgers and Hammerstein’s “Surrey with the Fringe on Top” for at least a decade, and the refined arrangement and treatment entranced me, as it always does. The lyric “Don’t wish you’d go on forever” resolves into a kind of whisper, a prayer, and a hymn-like delivery of “I can feel the day getting older,” evoking transitions and life phases. I wept to the warmth of the delivery – is it the reflective time of year? Ebersole herself paused to reflect on her own children, now in college, the now empty house, noting the phases of her performances and that now, “I sing it for the babies.”

A special treat mid-performance is observing Ebersole the musician watching Billy Stritch at piano and vocals, Tom Hubbard on bass, and Ray Marchica on drums take turns with lyrical phrases in Frank Loesser’s “What Are You doing New Year’s Eve?” Ebersole stays out of the spotlight, feeling, responding, acknowledging, swaying, smiling, quietly nodding, but never upstaging her old friend.

The solitary tune from my imagined set list, Garland’s 1944 “Have Yourself a Merry Little Christmas” (Hugh Martin and Ralph Blane), came late in the evening. Part of the magic of this tune is its minor key, which prevents imposing an insipid bounce – any performance is forced to ponder nuance and deliver reflection on lives lived. What can often be a sweet yet cold and melancholy musing on times gone by received from Ebersole a gorgeous full throated, controlled delivery of a pure and simple arrangement.

My favorite selections of the evening are tunes Ebersole and Stritch have performed and recorded over the years. “The Folks Who Live on the Hill” (Jerome Kern and Oscar Hammerstein) became a slow musing on the passing of time (“and when the kids grow up and leave us”), a marital partnership observed from without and felt from within – perhaps Ebersole and Stritch’s grandest hymn to grace and loving relationships. And finally, and perhaps first among my favorites this evening, a tune that I first heard Ebersole perform live in December of 2001, at a time New Yorkers were merely three months into a post 9/11 world that was both kinder and crueler. “There’s a Boat That’s Leaving Soon for New York” (George and Ira Gershwin) from Porgy and Bess is a slow, bluesy, close harmony, big-chorded exaltation about the wonders of this city, the joy of loving, and let us say it, the thrill of hearing Ebersole’s biggest, best-est belt.

Christine Ebersole and Billy Stritch: Snowfall, was December 18 at 7pm and will have a second show December 28 at 6pm (315 West 44th Street).