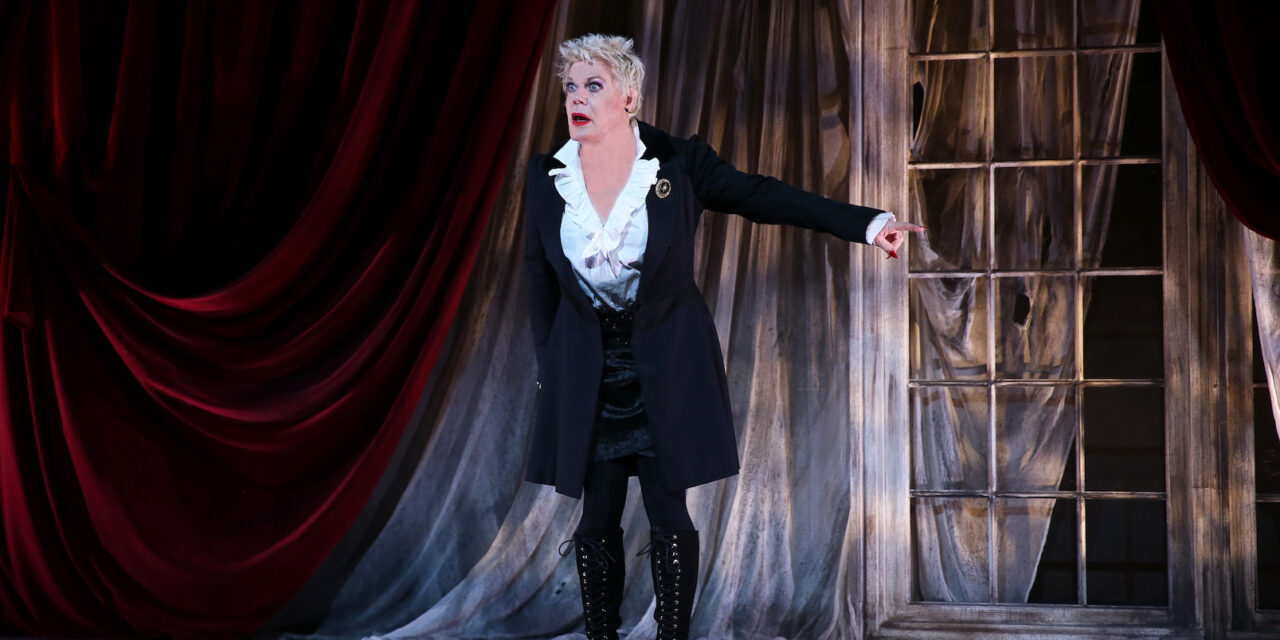 Great Expectations is one of those great novels most of us encountered in a sturdy high school English curriculum. Riveting and multi-layered with a multitude of conflicting good and evil characters for which the term “Dickensian” was coined, it is generally fondly remembered by those forced to read it (or those who pretended to and just watched one of several cinematic versions of lesser depth). Despite its stature as one of the “Great Books,” the last place one would expect to encounter it is in a solo performance by one of the world’s foremost stand-up comedians. Nonetheless, Eddie Izzard, a first-rate standup comic with rare international appeal, has launched a solo production of Charles Dickens’ Great Expectations, now playing through February 11 at The Greenwich House Theater in the West Village.

Izzard, who also has a substantial list of mainstream film credits, has a notable history of “firsts,” and a willingness to break down barriers and to engage in the unexpected and novel. In addition to crossing the Atlantic to conquer the US market, the comic has also had heretofore impossible success in European markets (France, Germany, Spain, Russia) in which she performed (completely or at least in part) in the local language. Later, with little to no experience in long-distance running, she completed, in 2009, 43 marathons in 51 days, raising millions for Sport Relief (an off-shoot of Comedy Relief). Most recently, in 2022, she served (temporarily) as a member of Parliament. So, really, this unusual move toward solo performance of a literary masterpiece does not, for her, qualify as unusual.

The novel is conveniently and artfully adapted (trimming the 180,000+ word novel to a 90-minute performance) for the stage by Izzard’s brother, Mark Izzard, and aptly directed by Selina Cadell. Eddie then brings a master storyteller’s craft to the riveting tale to provide an unexpectedly smooth and gripping version of this classic.

Set in early 19th century rural, marshy, south-western England, Great Expectations is the story of a seven-year-old, unusually named orphan, Pip, who one day is accosted by an escaped convict. Pip, threatened by the escapee, obtains food for him and tells no one of his whereabouts, maintaining a concern for his well-being, nonetheless. After some time passes, Pip is engaged by a wealthy spinster, Mrs. Havisham, to provide her with companionship. Pip, always genial and compliant, pleases the elderly lady (whilst falling in love with her aloof adopted daughter), and when one day years later he is informed he has a wealthy benefactor who sets him up with housing and an expense account, he assumes, incorrectly, that Mrs. Havisham is his patron. The story’s twists, turns and emotional boomerangs carry the rapt audience along with the narrative. But this type of transition, from novel to solo narrative with one actor assuming the many parts, is normally treacherous territory. It is only Izzard’s facility with this type of storytelling (as demonstrated in his many standup specials) that allows Great Expectations to be delivered so convincingly.

Elegantly dressed (costume by Tom Piper and Libby Da Costa) in a modern take on Victorian fashion—a long, black, blazer over a white, open-neck frilly shirt, black skirt, black tights and knee-high, black, lace-up boots—she’s half English lord/half pirate, topped with a shock of short blond hair and bright red lipstick. The surroundings match (set by Tom Piper) with luscious red velvet curtains that drape from floor to ceiling and across the stage; and with beautiful lighting that ostensibly places us inside Mrs. Havisham’s crumbling mansion, with a dying light over high, arched garden windows (Tyler Elich’s lighting is magnificent). With no set to speak of aside from artfully arranged light and curtains, Izzard manages to create the interior of every scene being described right there on the stage, playfully interacting with invisible messengers who bring her characters “news” periodically—a comic interaction that gains more laughs at each instance as the play moves on. Her experience as a live performer is invaluable, holding the audience rapt and never resorting to a dull or expository narrative.

In a theater season rife with narrative monologues doubling as “plays,” Izzard’s Great Expectations delivers exactly what it sets out to: a 90-minute re-telling of a classic, beloved novel that grips and delights the audience exactly as much as it should. While stand-up comedy has its ups and downs, hits and misses, this classic tale told by an expert performer has twists and turns that keep you entranced all the way through.