Edmund Bagnell: Happy Days Are Here Again at Feinstein’s/54 Below 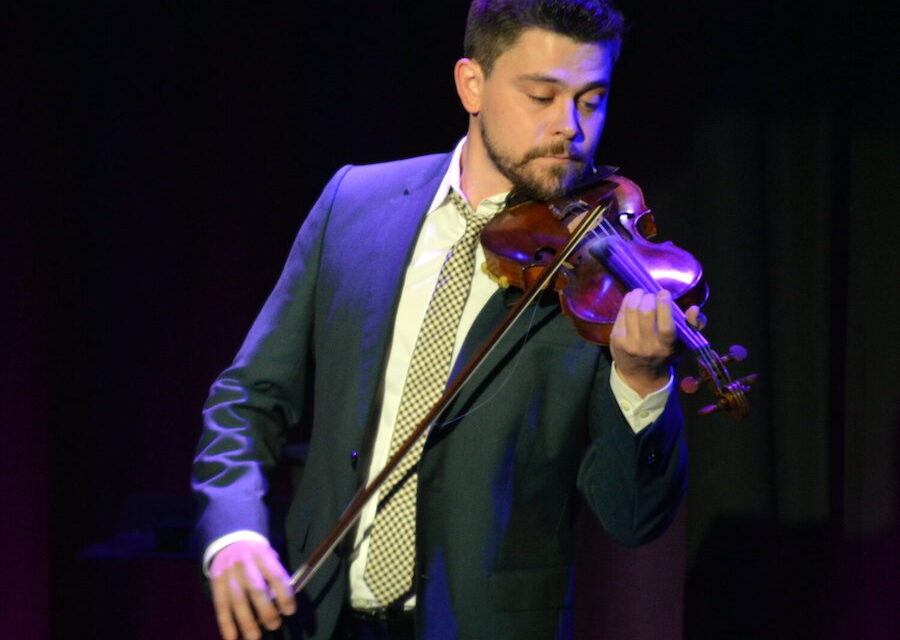 Will we ever tire of a performer sharing euphoria from the stage—the absolute delight of performing live again after 18 months of pandemic weariness? So far, absolutely not. And violinist-singer Edmund Bagnell was so excited to be back he not only named his show Happy Days Are Here Again, but bookended his set by performing the eponymous number by Milton Ager and Jack Yellen. The show, directed and co-written by Michael Schiralli, was a bundle of joy on all counts, with Bagnell himself an epicenter of joie de vivre. He’s charming and personable, and tops it off with superb chops on the violin and a smooth baritone that sits well on the ears.

Bagnell is well-known as a member of the pop-classical string quartet, Well Strung, but brings skills to his entertainment tool kit via his solo work as an actor and dancer. That experience shows in his work. His vocal dynamics and excellent phrasing allow for the lyric to shine and stories to be effectively told. With or without violin in hand, Bagnell offered a varied program from the pop tunes  “It’s Not Unusual” (Les Reed/Gordon Mills) and the ultra-modern “I Don’t Care” (Ed Sheeran/Justin Bieber/Max Martin/Shellback/Fred Gibson/Jason Boyd) to country, “Callin’ Baton Rouge” (Dennis Linde) to his own (yes, he’s a composer-songwriter too) “Water,” a melodic classic love song with a rhythmic undertone of a folksy sea shanty.

For a taste of his classical violin training, Bagnell performed Edward Elgar’s beautiful 1888 “Salut d’Amour (Liebesgruß), Op. 12,” originally written for violin and piano. With musical direction and accompaniment by Mark Hartman, the duo created an uplifting injection of sweet serenity into the set with this lovely composition. Much of the joy of Happy Days Are Here Again was in the chemistry sparked between the pair, with Hartman contributing vocals (quite nicely) on a few tunes, including the encore to the encore (the demand was fierce), an unrehearsed but truly successful “Carolina in My Mind” (James Taylor). Hartman’s clear delight in what Bagnell had to offer was in itself an added bonus to the evening. There’s no question that Hartman is dually skilled at accompanying a singer as well as playing, but the vibe and energy of their interaction added another bounteous layer of enjoyment to the set.

A totally playful portion of Happy Days Are Here Again came with a riff of a Barry White disco tune and Bagnell happily exclaiming, “in disco, strings rule!” To prove the point an audience participation “game show” ensued, with Bagnell playing a string riff from a popular disco song and audience members trying to guess the name of the number. Eight tunes were presented, from “Hot Stuff” (Pete Bellotte/Harold Faltermeyer/Keith Forsey) to “More Than a Woman” (Barry, Robin, and Maurice Gibb) to “Funky Town” (Steven Greenberg). The savvy folks in the audience did well, seemingly surprising Bagnell—and it was all great fun.  Also high on the list of merriment was Bagnell’s wry rendition (in Italian) of the 1956 parody song “Tu vuò fà l’americano/You Want to Be American” (Renato Carosone/ Nicola Salerno). It’s a swingy jazz number that must be Googled for the hilarious English translation.

The downside of Happy Days Are Here Again was the use of pre-record tracks on some numbers, with and without Hartman joining in. Their use was relatively minimal but still seemed a jarring intrusion into the ethos of cabaret, where liveness rules. Still, aside from the slight mar, Bagnell delivered on happiness with a well-constructed, well-paced and thoroughly delightful evening of entertainment.