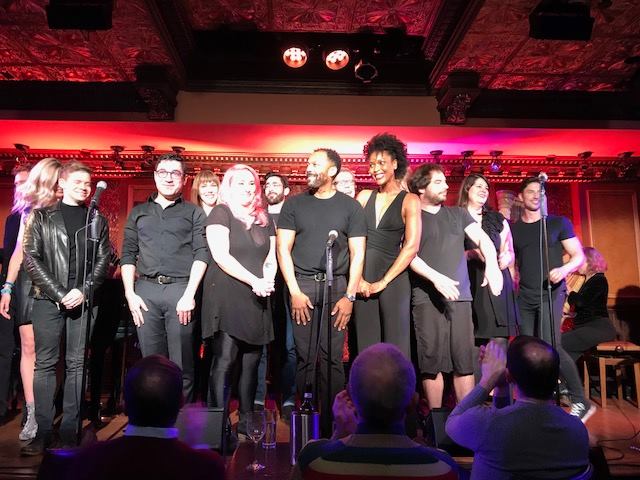 Thirty years ago the AIDS crisis was at a terrible peak. Stirred by events of the time, poet and writer Bill Russell, with composer Janet Hood, wrote Elegies for Angels, Punks and Raging Queens, as a theatrical response to the crisis. Three decades later, the piece still stands as a magnum opus, not only because AIDS is still a worldwide problem, because the emotions the work elicits are about the universal truths of love, family and friendship, as well as death and dying. A tremendous amount of huge talent and heartfelt performance on the very small stage of Feinstein’s/54 Below thus made for an unforgettable evening of material real and raw, touching and joyous, and ultimately, celebratory. The entire cast excelled, uniformly in the zone and inspired, under Russell’s direction.

Elegies for Angels, Punks and Raging Queens is a song cycle (inspired by Edgar Less Masters’ 1915 work, Spoon River Anthology, and the Names Project quilt) told in free-verse monologues with a blues, jazz and rock score. The 32 stories are told by those who’ve gone, from a perspective beyond the veil. They cover a variety of circumstances, from gay couples, to drug users, to those infected through blood transfusions, to a secretary who doesn’t know how she contracted the disease. At times, the tales are so powerful they’re positively Shakespearean. Others are lighter, even amusing. In sum, the piece is meant as a community project, which is why no actor doubles up on a monologue, and each is delivered by one speaker alone. One affecting story, “Khadija” was delivered with great insight by young Emerson Davis, as a child who was born with AIDS. Luba Mason’s “Claudia” with the related song, “I Don’t Know How to Help You,” sung by Nora Schell, was a gut-wrenching tale of devotion and goodness and what the human heart is capable of. The author’s “Patrick, Parts I and ll,” bookended the piece, giving context to a horrifying time during the height of the crisis,

The ten songs, all of musical complexity and depth, are interspersed among the monologues, with their differing styles perfectly complementing the lyrics and stories portrayed. The excellent musical trio on hand, with Hood music directing and at the piano, included harpist Jennifer Hoult and celloist Clay Reud, playing two of the most soulful instruments on the planet, guaranteed to add depth and heart to the music. The singers of Elegies for Angels, Punks and Raging Queens represent the living – those left behind in the aftermath of tragedy. Standouts included the very funny “Spend It While You Can,” sung by Kissy Simmons, Paul Castree, Stephanie Gibson, Tari Kelly and Tally Sessions; and “And The Rain Keeps Falling Down,” voiced by the remarkable baritone, Josh Young. Of enormous poignancy was “My Brother Lived In San Francisco,” sung by Emily Skinner, following the heart-wrenching monologue, “Ray,” delivered by Hunter Ryan Herdlicka. Ending this memorable evening of artistry was T. Oliver Reed, in splendid voice, with the cast, singing “Learning to Let Go.”