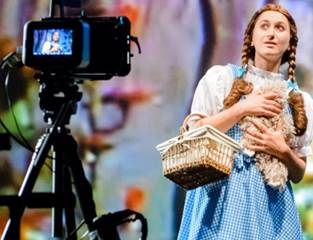 NYU Skirball will present Elements of Oz, a live performance/augmented reality mash-up of theater, technology and pop culture that celebrates and deconstructs The Wizard of Oz, from the New York-based performance company, The Builders Association, on Saturday, December 7 and Sunday, December 8, 2019 at NYU Skirball. The MGM film is celebrating its 80th Anniversary as one of America’s most beloved films (it opened on August 25, 1939).

A narrator recounts juicy background details about the making of the film as three powerful performers recreate famous moments live on stage.  Interspersed with excerpts of the original novel, YouTube tributes, fan theories and critical interpretations from the likes of Salman Rushdie, Elements of Oz revels in the ways tens of thousands of people around the globe have made Oz their own.

In much the same way the classic MGM movie transported us from the stark black and white of Kansas to a vibrant Technicolor Oz, Elements of Oz uses AR (Augmented Reality) to enliven and deepen the viewers experience. Audience cell phones remain on and the stage action interacts with personal smart phones through a unique app that delivers the Technicolor Land of Oz of our imaginations.

The Elements of Oz cast features Moe Angelos, Sean Donovan and Hannah Heller. It is directed by Marianne Weems, and written by James Gibbs, with costumes by Andrea Mincic, lighting design by Jennifer Tipton, scenic design by Neal Wilkinson and video design by Austin Switser.