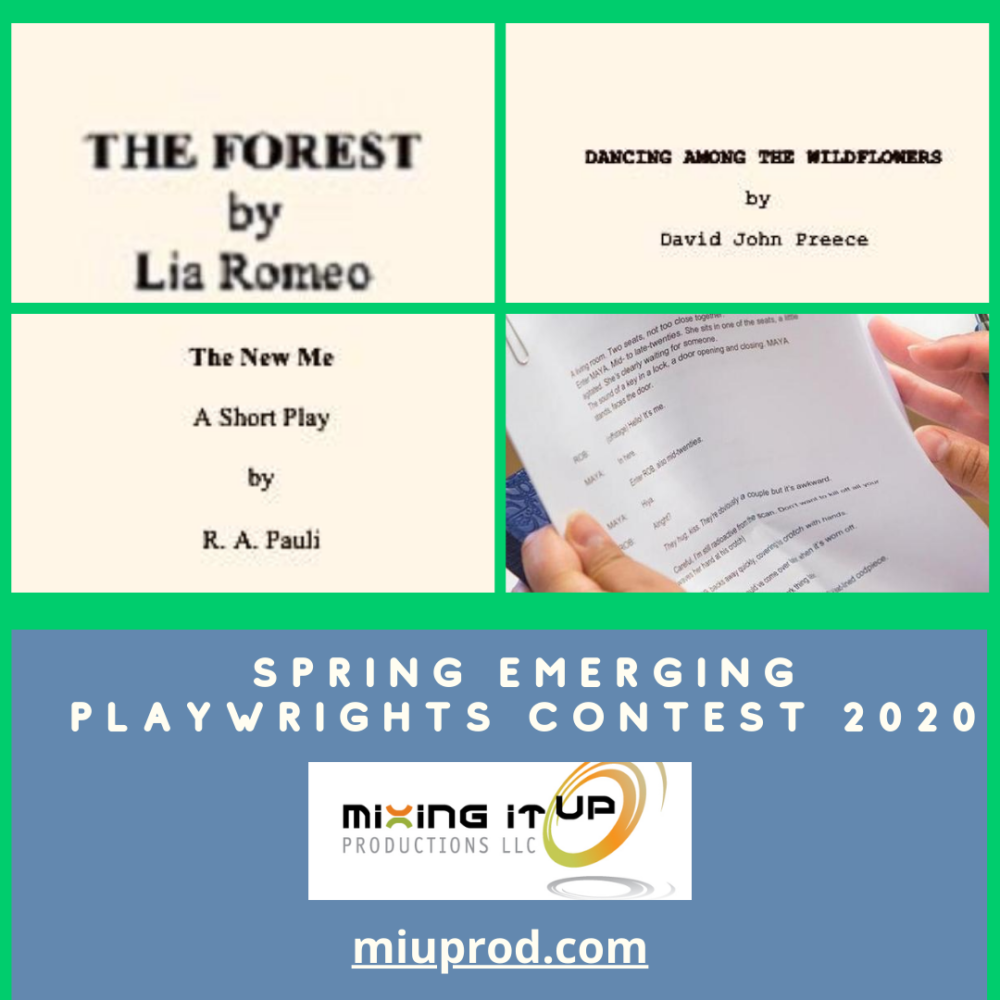 Mixing It Up Productions announces the grand winners of its inaugural Spring Emerging Playwrights Contest  today. Lia Romeo (Full-Length), David John Preece (One-Acts) and R.A. Pauli (Short Plays) received top nods for their scripts from nearly 800 entries from the United States and abroad. The Facebook-announced contest called for playwrights to submit their scripts in one of three categories: full-lengths, one-acts, and short plays, with a caveat that their works were unproduced. The winning scripts were selected by an esteemed panel of 65 judges representing various aspects of the theatre community. Contest grand prizes include subscriptions to Playwright Helper Submissions and BroadwayHD, a conference with Tony® Award Producer Tracey Knight Narang (Oklahoma), and cash awards, plus a certificate of recognition.

The esteemed panel of 65 judges* volunteered their time and experience to review the scripts and rate each one with constructive comments. The panel was comprised of theatre professionals representing many aspects of the theatre community including directors, writers, actors, producers, theatre reviewers, professors, dramaturgs, Tony Award winners, Broadway, Off Broadway and cabaret. For the complete list of judges visit: https://www.miuprod.com/PANEL-OF-JUDGES/

“Getting your script read and moving it from concept to stage is an intricate and difficult process, even for accomplished playwrights. We wanted to offer an opportunity for emerging playwrights to have their scripts read and to receive constructive feedback from professionals in the theatre field that will assist them with their playwright journey,” says Fred Rohan Vargas, founder of Mixing it Up Productions. and Off-Broadway Producer (Money Talks). “We thank our 65 judges for their commitment and time to further growth in our industry.”

Mixing It Up Productions strongly believes in inclusion. While grand winners will receive certificates of recognition, all playwright contest entrants will receive a document of acknowledgment and membership to the company’s Playwrights Forum, offering further submission opportunities, seminars, workshops, events and connections..

The company’s next program offering, Script to Stage, begins in September, designed for playwrights to work on the development of their plays with theatre professionals, culminating in a staged reading. The immersive experience, initially designed pre-pandemic, will be conducted virtually through Zoom and other virtual setups.

Mixing It Up Productions is a multimedia entertainment company providing professional services in development, production, and licensing of intellectual property in theatre, music, and digital media. Founded by Fred Rohan Vargas, an Off-Broadway producer (Money Talks), Broadway partner/investor (The Lightning Thief), playwright and songwriter, the company strives to offer assistance to the next generation of creative talent.