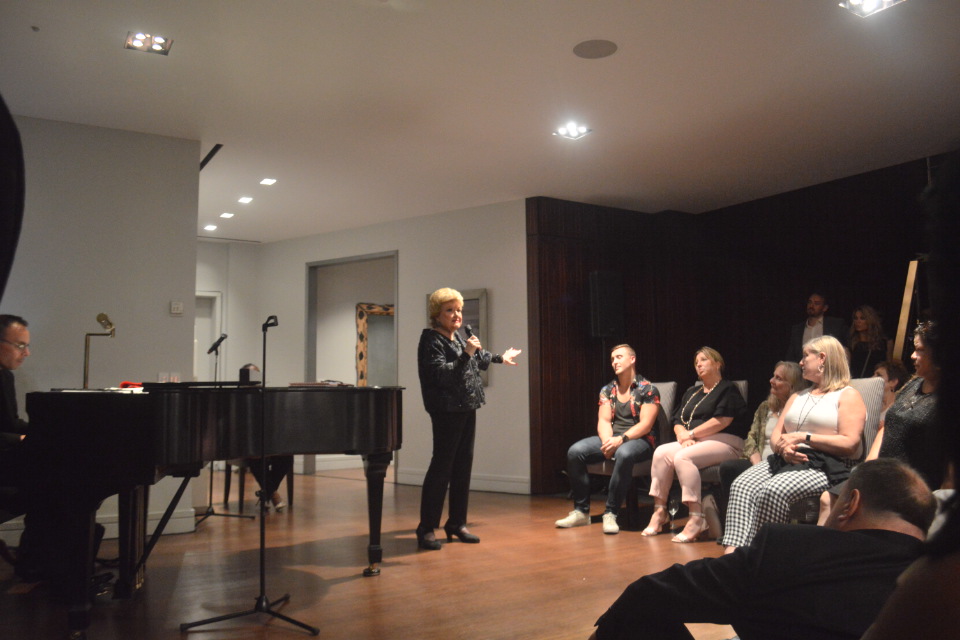 For the past eight years, the Encompass New Opera Theatre has held its annual Jazz Cabaret Gala in June at a fabulous duplex Tribeca Penthouse, always featuring exceptional artists from the cabaret world. This year, on June 19, 2018 the Gala was extra special as the one and only legendary singer Marilyn Maye was the featured entertainment. You could feel the excitement in the air as this sold out Benefit was filled with patrons, benefactors, supporters and friends of Encompass. This is one of several fund raisers that Encompass has each year to fulfill its mission dedicated to the creation, development and production of adventurous new music theater and contemporary opera, as well as important musical works by American and international composers. After an hour of cocktails and hors d’oeuvres, Artistic Director Nancy Rhodes brought us all into the huge living room to talk about the evening and some of the events that Encompass has planned for the balance of the year. She then introduced Michael Kerker, ASCAP’S Director of Musical Theater who spoke glowingly about the star attraction of the evening who was Johnny Carson’s favorite singer and appeared on The Tonight Show a record 76 times.  Marilyn was recently featured on CBS Sunday Morning in celebration of her long career and her 90th Birthday.

Marilyn entered in a stunning sequined jacket, looking decades younger than her years.  At the Grand Piano was her incredible music director/accompanist Tedd Firth and exceptional bassist Tom Hubbard. I have reviewed Marilyn many times at many different venues and have run out of superlatives to describe her performances.  Each time I go to one of her shows I learn something new and continue to marvel at her talent and musical abilities. Here we were in a sprawling living room and Marilyn asked people to come up front and sit on the floor and even the stairs.  She played to the crowd and made each and every person in the room feel important and was singing just to them.

Marilyn began with a lively special arrangement of “I Hear Music” paired with “The Song Is You” that was the perfect feel good opening. Her impeccable phrasing was evident in each song and her “Get Happy” medley included “I Want To Be Happy” and “Put on a Happy Face” couldn’t have been better. She was the first one to record “Cabaret” even before the show came out and her rendition shines. Her voice was heard in 1969 for the Ford Motor Company’s Lincoln-Mercury radio ads with new words to “Step To the Rear” from the Broadway Show How Now Dow Jones.  She mentioned that she received a new car each year until the ad campaign ceased.  Throughout the show, Marilyn made each song feel fresh and new as with her version of old standards like “Come Rain or Come Shine” and “Any Place I Hang My Hat is Home.” The hour and ten minutes passed quickly and the audience, young and old, was enthralled with her style, her voice, and remarkable performance. Marilyn joked, played with audience members, and sang her heart out on each number. The show consisted of mostly up tunes which was right for this event, but the ballad “Guess Who I Saw Today” was a three act play, and the Fats Waller Medley thrilling with such songs as “I’m Gonna Sit Right Down and Write Myself a Letter, “Ain’t Misbehavin’” and “Honeysuckle Rose.”  The poignant closing was James Taylor’s  “The Secret O’ Life” about the passage of time and Arte Butler’s moving “Here’s to Life.”  The lyrics say, “Here’s to life, here’s to love and here’s to you”……and here’s to the incomparable Marilyn Maye and Encompass for giving us a memorable and unforgettable night!