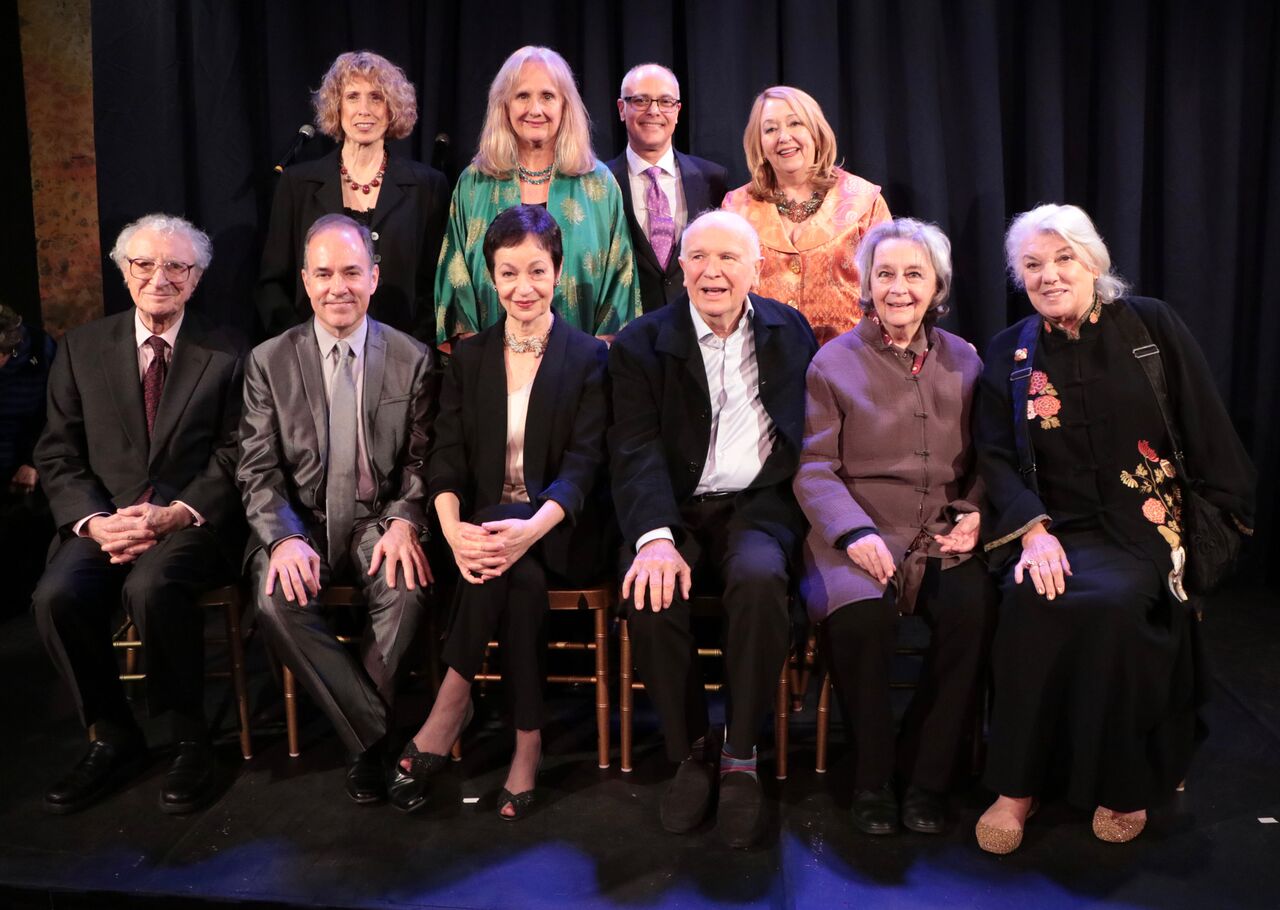 For the past 40 years, The Encompass New Opera Theatre has championed rare and rewarding musical experiences celebrating both the great composers of modern American opera, as well as the adventurous new talents creating great musical theatre today. Their annual Benefit at the National Arts Club on Oct. 23, 2016 honored the composing team of Lynn Ahrens & Stephen Flaherty (Once On This Island, Ragtime, Man of No importance, My Favorite Year) and playwright Terrence McNally (Master Class, Kiss of the Spider Woman, Ragtime).

Nancy Rhodes, Artistic Director of Encompass, began the evening thanking those who made the evening possible, the supporters of the organization, and music director/arranger/pianist Beth Ertz and bassist Jeffrey Carney. She introduced host Midge Woolsey who brought on three young opera singers, Adelaide Mestre, Marie Anello and Michael Marcotte to sing “Dear One” from Kiss of the Spider Woman.

Terrence McNally is an avid opera lover as demonstrated in his brilliant play Master Class about Maria Callas in her later years. The legendary actress Zoe Caldwell starred in the original production she said that Terrence is not only a good friend but also“ her muse” and that she loves him very much. Ms. Caldwell is frail but when she got up to speak her strong and unique voice echoed through the hall. Next up was Tyne Daly who starred in the revival of Master Class seven years ago, and also last year in Mother & Sons. She spoke of her love and respect for this remarkable man being honored. Nathan Lane, with his terrific humor, first turned his speech into a roast, but when he became serious said that Terrence was responsible for his career as he starred in many of his plays including Lisbon Traviata and most recently It’s Only a Play. Karen Ziemba read a letter from John Kander who was not able to attend and sang a haunting “Love and Love Alone” from The Visit.

Board Member and past honoree Sheldon Harnick spoke about the creativity and brilliance of the duo who met over 30 years ago at a BMI workshop and have worked together ever since creating nine musicals and garnering many awards and honors, including Tonys, Grammys, Drama Desk and more. Given the level of talent, there were many outstanding moments in this tribute evening including LaChanze, who starred in Once on This Island at Playwright’s Horizons, singing “Waiting For Life to Begin.” Lucky Stiff was produced in 1988 and Liz Callaway sang the poignant “At Times Like This” (a girl could use a dog). James Snyder was wonderful singing “On The Streets of Dublin” from Man of No Importance. Christy Altomore and Derek Klena the two young stars of the upcoming musical Anastasia coming to Broadway in the spring, sang a lovely duet “Crowd of Thousands.” Christiane Noll, who starred in the revival of Ragtime, sang a beautiful rendition of “Back To Before.”

It was thrilling to hear Brian Stokes Mitchell and LaChanze in the masterful duet of “Wheels of a Dream” from Ragtime. Brian’s last song was from The Glorious Ones “Something That Lasts” practically tore the house down. This was the perfect way to end the show as it was clear that these three remarkable honorees had all created works that will last forever and continue to inspire generations to come.

After the awards were presented to the honorees and acceptance speeches were made, Nancy Rhodes presented a special award to Producer Michael Kerker, Director of Musical Theater at ASCAP. Michael usually shuns the spotlight, and it was a wonderful surprise and well deserved for a man who has championed songwriters and musical theater talent for many years.