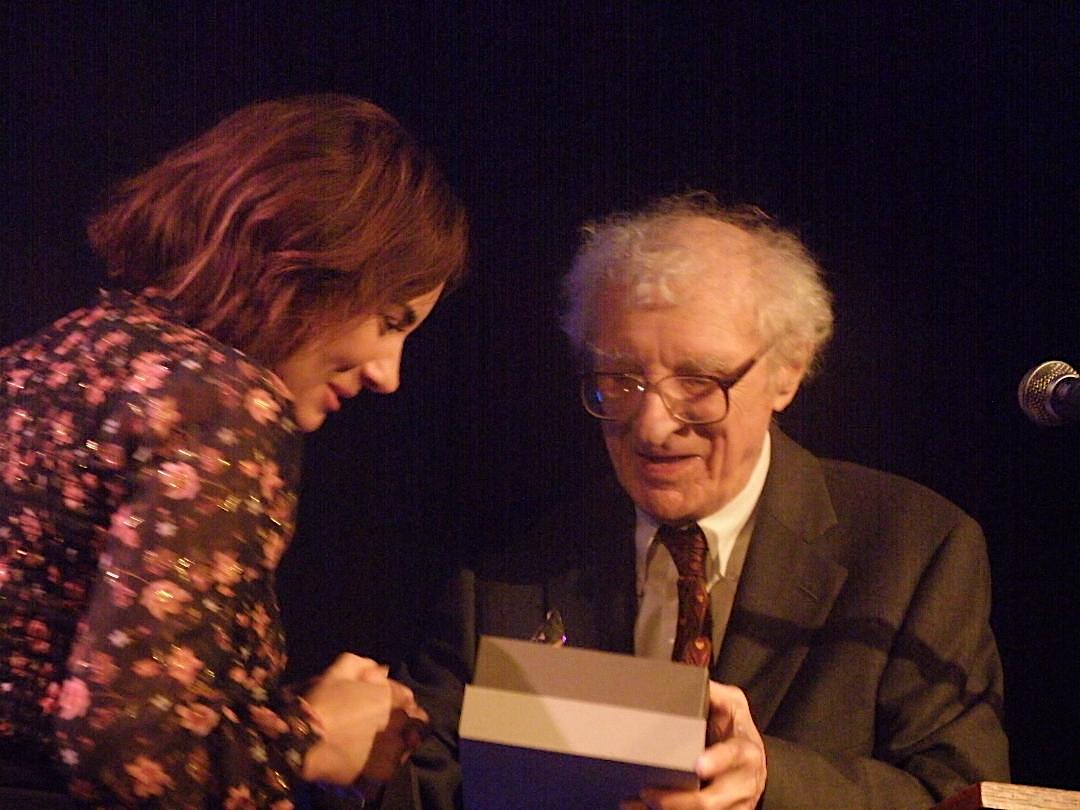 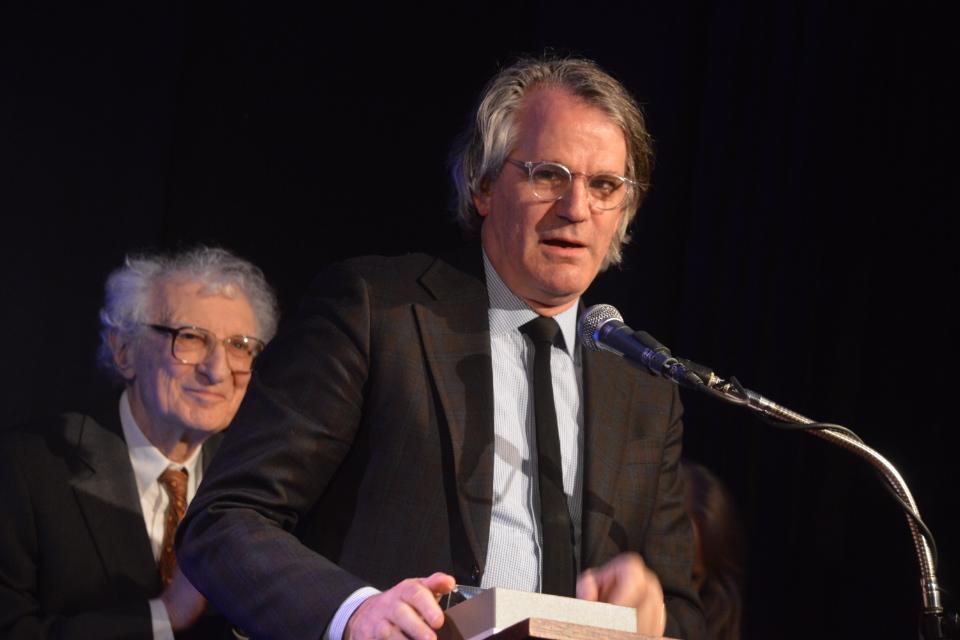 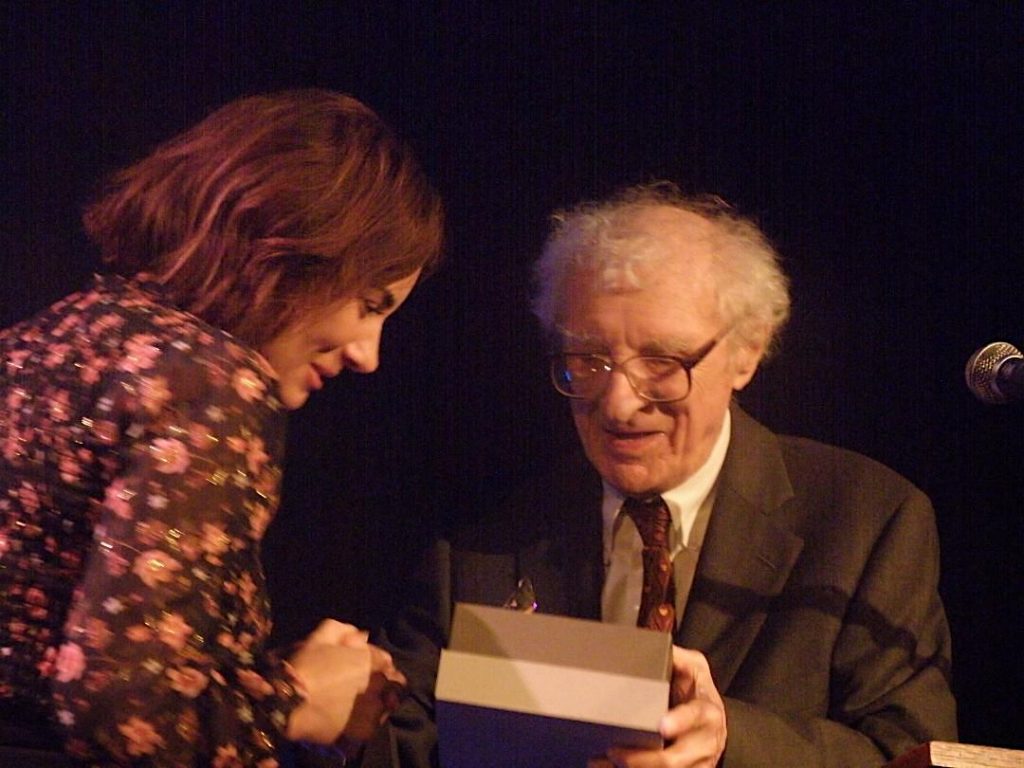 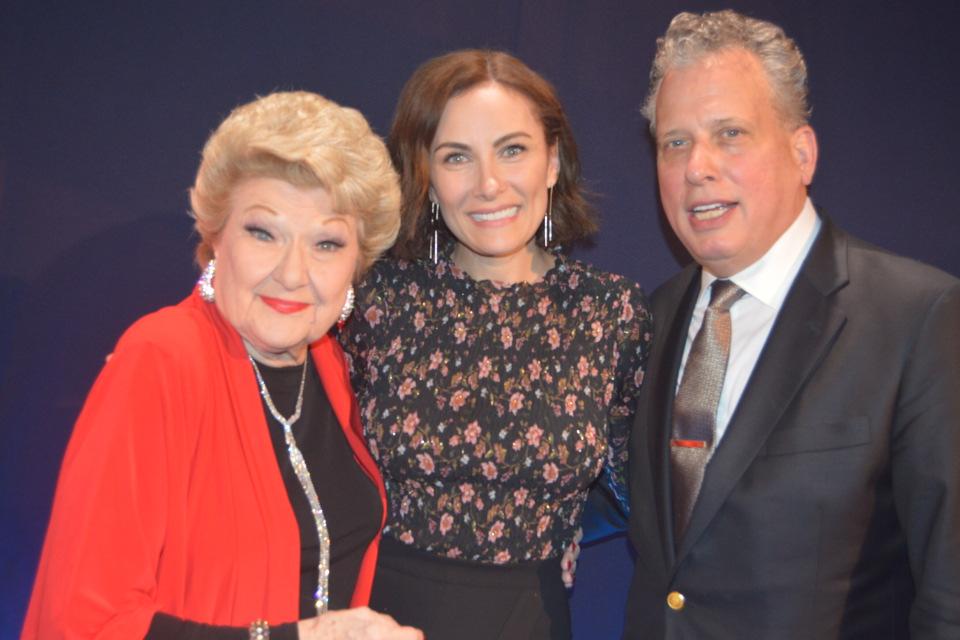 The gala evening got off to a good start with hors d’oeuvres and cocktails at the historic National Arts Club where Encompass has held their musical theater tributes for the past 15 years. The salute to theater luminaries Laura Benanti and Bartlett Sher began with a welcome from host Midge Woolsey of WNET & WQXR fame. Then Artistic Director Nancy Rhodes introduced members  of her hard working Board, and talked about the mission of Encompass that is dedicated to creating a new home for American opera and musical theater, She talked about the exciting production of Anna Christie from last season (a CD is being recorded) and what is to come. The entertaining and heartfelt tribute was produced by Nancy and ASCAP’s Michael Kerker with Beth Ertz as Musical Director and John Beale on bass.
First to be honored was Laura Benanti who is currently starring in the acclaimed Lincoln Center production of My Fair Lady. Christian Dante White who plays Freddy Einsford Hill performed his remarkable rendition of “On The Street Where You Live.”  Composer Maury Yeston sat at the piano and tenderly sang “In A Very Unusual Way” from Nine that starred Laura in the revival with Antonio Banderas. Laura was nominated for a Tony for her spectacular performance in She Loves Me and  soprano Lianne Gennaco  beautifully performed “Vanilla Ice Cream” from that show.  Billy Stritch recalled seeing Laura in the 1999 Broadway production of Swing and sang the song she performed in that show, “Cry Me A River.”  Then he accompanied the incredible Marilyn Maye in a brilliant swinging jazzy Lerner/Lowe medley of several of the hits from My Fair Lady. She mentioned that she celebrated her April birthday last year at Feinstein’s 54 Below in a show called “90 At Last” and this year she will be back in a show entitled “I Wish I Was 90 Again!”  Laura and the audience jumped to their feet to give a standing ovation to this consummate performer who continues to get better and better, if that is at all possible. 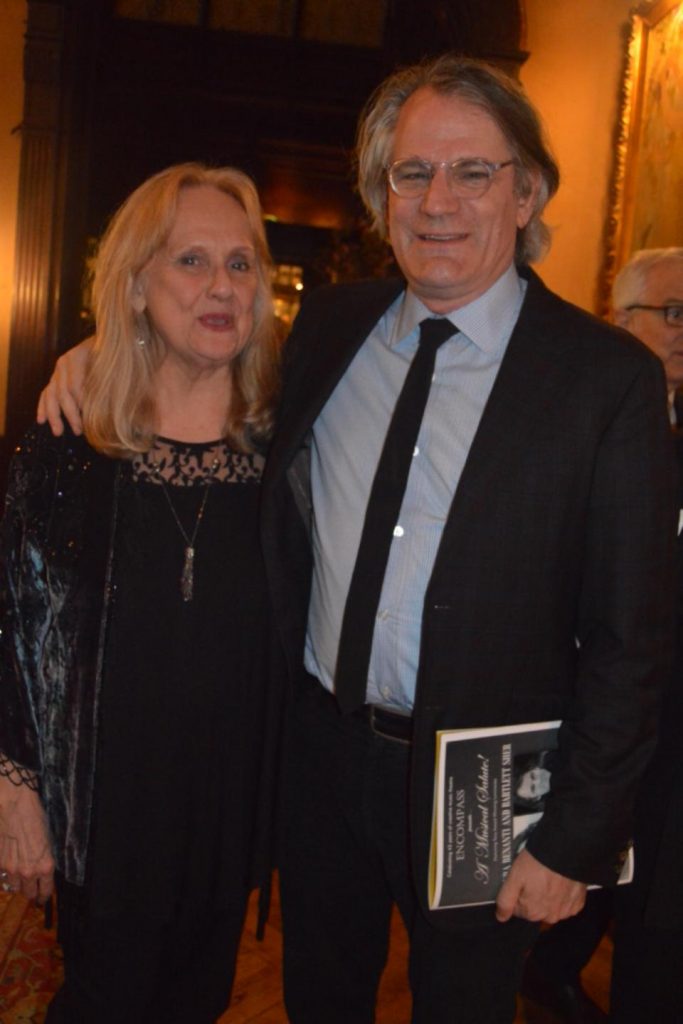 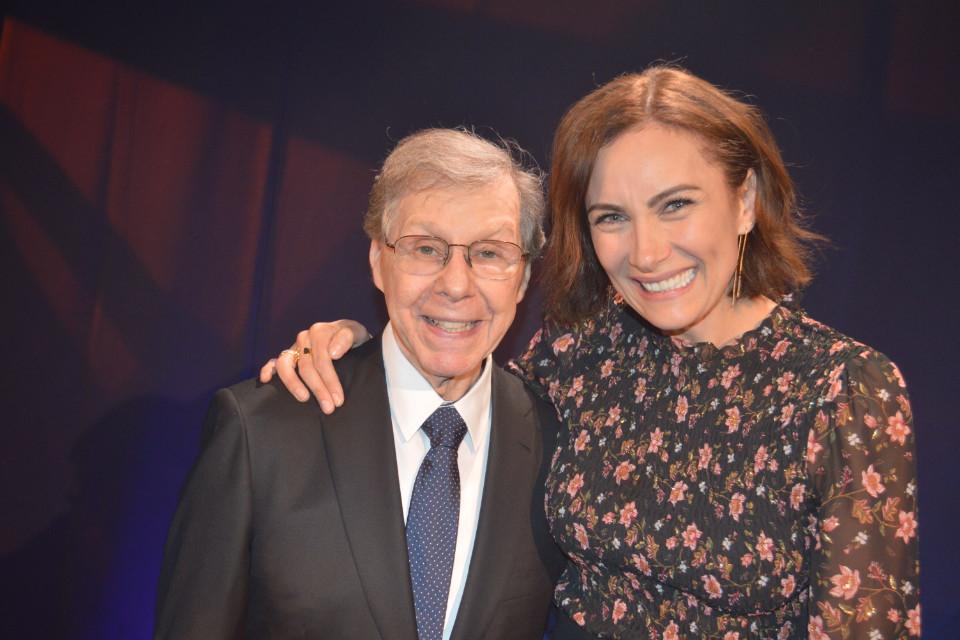 The New York Times has praised honoree Barlett Sher as “one of the most original and exciting directors, not only in the American theater but also in the international world of opera.”  He has been nominated eight times for the Tony Award and won in 2008 for his remarkable revival of South Pacific. Bart’s two adorable daughters Lucia and Phoebe sang “I’m Gonna Wash That Man Right Out of My Hair” with Laura leading the number and the girls added special lyrics about their father’s life in the theater. Bart directed “Fiddler on the Roof” in 2015 and Samantha Massell from that cast sang the emotional “Far From The Home I Love.” From the current production of “To Kill A Mockingbird,” Baize Buzan with Kimberly Grigsby providing background music, performed a touching monologue from that show. His first Broadway production in 2008 was Light in the Piazza by Adam Guettel and Craig Lucas, and the charming Adam talked about their collaboration. Then Whitney Bashor sang “The Beauty is” from that show. Also giving their recollections of working with this talented director was scenic designer Michael Yeargan and playwright J.T Rogers (Oslo). The Metropolitan opera’s Susanna Phillips wowed the audience with her aria from The Barber of Seville as did Adrienne Danrich who is in Bart’s upcoming production of Intimate Apparel singing “Marry Up” by Ricky Ian Gordon and playwright Lynn Nottage. 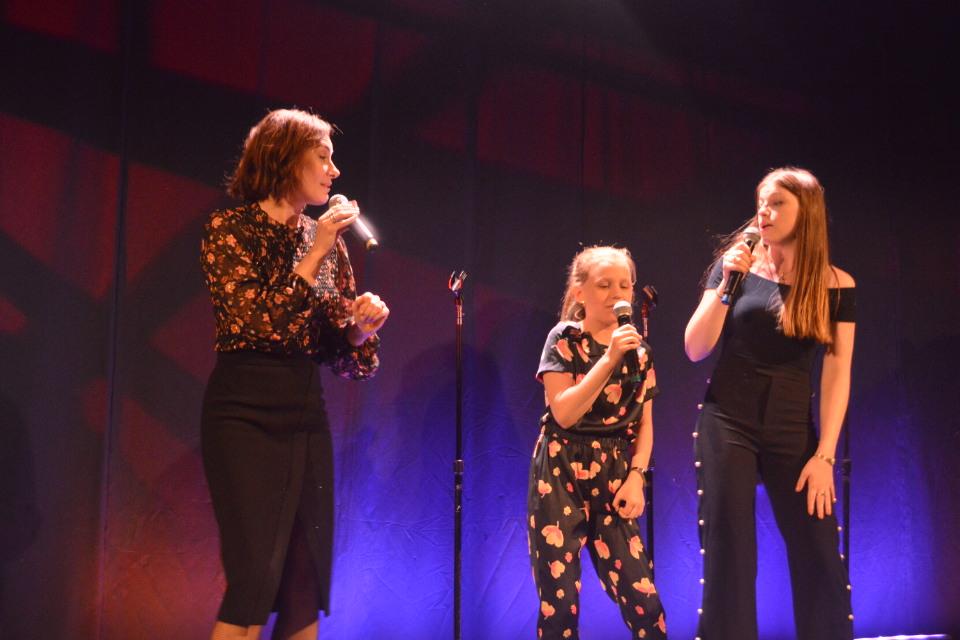 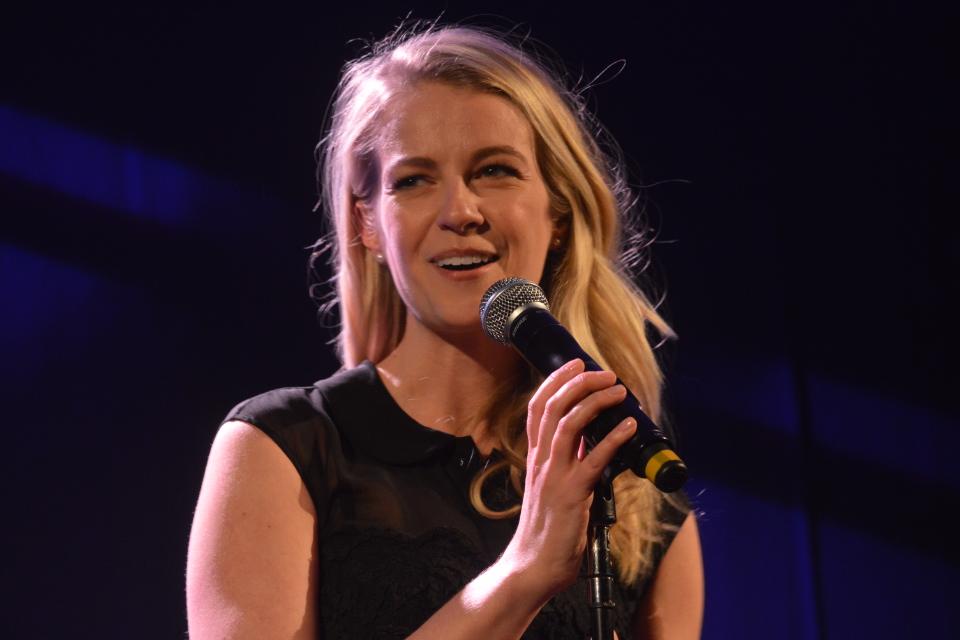 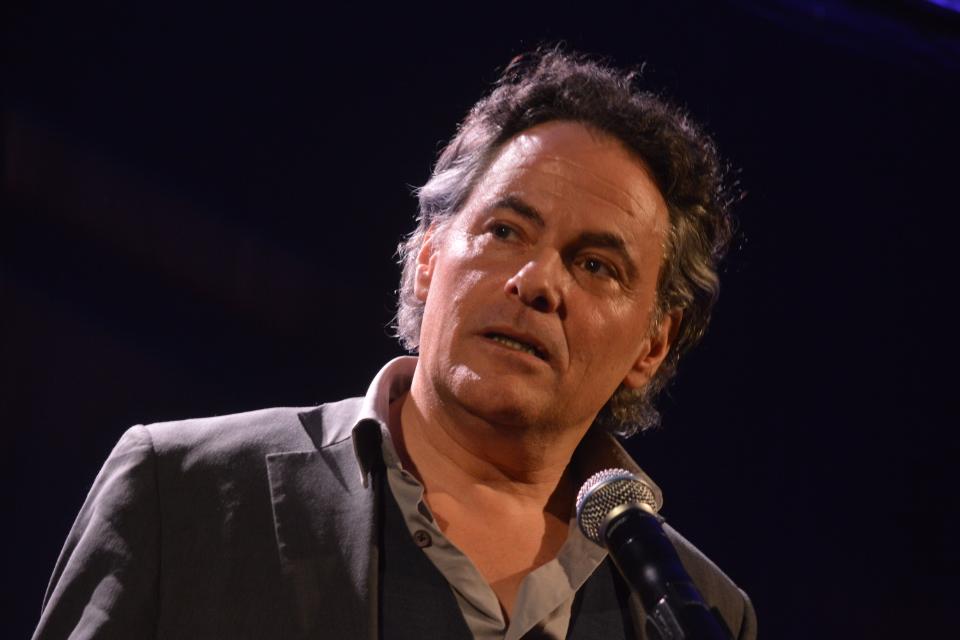 Theater legend Sheldon Harnick (about to celebrate his 95th birthday) came on stage to talk about how wonderful it was to work in the theater with such talented people as Laura and Bart. Nancy mentioned that a new Award has been established by Encompass called the “Sheldon Harnick Living Legacy Award” and Sheldon presented it to each of the honorees.
Congratulations to everyone involved in making this special and warm tribute evening happen. Nobody wanted this to evening to end, and  we were fortunate that after the show we all went into theReception area for champagne, a light buffet, dessert and coffee and were able  to congratulate Laura, Bart, the cast and all the celebrities and notable attendees from the entertainment world.
Photos: Maryann Lopinto