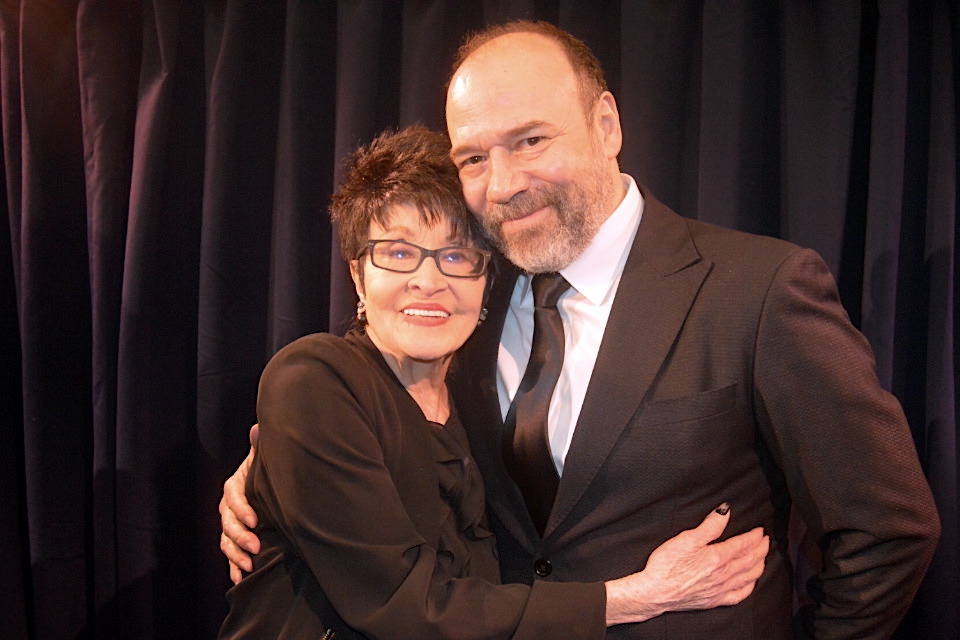 By their nature, galas are festive, celebratory affairs, but on this occasion, the Encompass New Opera Theatre event at the National Arts Club, was especially jubilant. After two years of pandemic layoff, a starry crowd gathered to celebrate the achievements of two performers universally loved, admired and truly deserving of recognition in their craft and for their humanity—Chita Rivera and Danny Burstein.

Encompass Artistic Director Nancy Rhodes once again helmed a glorious and elegant evening, hosted by Midge Woolsey of Thirteen/WNET and WQXR Radio, who noted to applause that “we’re not on Zoom!” Therein ensued a spectacular volley of recollections and musical entertainment by stars of stage, screen and television, plus members of Encompass. This ensemble presented an expert from their production of Angel of the Amazon, “a must-see drama to save the rainforest,” scheduled for a Summer tour, and based on the true story of Sister Dorothy Stang. Stang was an American nun activist for indigenous farmers and families in Brazil, murdered in 2005. Another Encompass project, the music video Unheard Voices: An Immigrant’s Dream, produced in association with opera tenor, Oswaldo Iraheta, was highlighted. During the program, Iraherta sang a dazzling “Maria” (West Side Story) for Rivera.

Several stars performed for both Burstein and Rivera—such is the familial nature of the business. Others individually dedicated their talents and tributes. The common link among all who appeared, applied to both honorees, was the level of heartfelt and authentic love and regard for each and both. These sentiments energized the room, elevated the proceedings and often brought tears of joy in abundance.

First to be honored was Burstein, who received The Sheldon Harnick Award for Creative Excellence (Harnick was unable to attend, but sent written regards). Among his many credits over an extraordinary career, Burstein won the Tony Award in 2020 for Best Featured Actor in a Musical in the Broadway hit Moulin Rouge! The Musical. He has received seven Tony Award nominations, and three Grammy Award nominations, and has been seen in eighteen Broadway shows including The Drowsy Chaperone, South Pacific, Golden Boy, Cabaret, Fiddler on the Roof, Titanic, and Company. Presenting the award to him was another Broadway superpower, Joel Grey.

Chita Rivera received The Encompass Outstanding Lifetime Achievement in the American Musical Theatre. She is still a force of nature having just turned 89, is no less than a theatrical icon and one of Broadway’s greatest triple-threat talents. She is one of the most nominated performers in Tony Award history with two Tony wins out of 10 nominations. Rivera was also given the 2018 Special Tony Award for Lifetime Achievement in the theatre. Her stunning performance as Anita in the original Broadway premiere of West Side Story brought her international stardom, kicking off an astounding career over seven decades. To present her award, director John Doyle delivered a wondrous speech in the special literate style that the British are known for.

Along the way during the evening, tributing both honorees, was a roster of amazing talent, led off by George Dvorsky with some personal reminiscences of Burstein and his late wife, actress Rebecca Luker. Dvorsky sang an energetic medley of numbers from Burstein’s career and also later led the entire cast in song in a wrap-up of the gala. As a tribute to Burstein’s turn in Fiddler on the Roof (and to its lyricist Sheldon Harnick), Karen Ziemba, Jessica Hecht and Alexandra Silber sang a medley from the show, with gorgeous harmonies and individual voicings. Ziemba also did a few solo turns of her own, particularly as a zany and delightful Fraulein Schneider (Cabaret) and that character’s signature tune, “So What?” Later, she joined forces with Dvorsky for an apropos “You’re the Top,” with added, special lyrics relevant to Rivera.

In soaring voice, Laura Benanti sang (for Burstein) “I Could Have Danced All Night,” and for Rivera, her mentor, “In a Very Unusual Way,” bringing them both to tears. Tenor John Riddle serenaded honorees, acing a tune usually reserved for baritones, “Some Enchanted Evening,” while Bianca Marroquin also came to tears with “All That Jazz” dedicated to “my muse, my Queen,” Rivera. Earlier, Marroquin in drag brought the house down with a comic turn of “I Am Adolpho” from the Drowsy Chaperone. Funnier still was a monologue from Nathan Lane celebrating Rivera and their adventure in the Broadway kinda-flop, Merlin, which in 1983 was famous for its 69 preview performances. Lane—who started off in standup comedy— had the house in tears of another kind—gut-busting laughter.

A trio of beautiful femmes of the stage also contributed heartfelt and breathtaking vocals: Liz Callaway with an emotive “In Buddy’s Eyes” from Follies, Mary Beth Peil with “Chita’s song” from The Visit, a stirring “Love and Love Alone” and an inspired Karen Mason with “Colored Lights” from The Rink. At the piano throughout the evening was Beth Ertz, Encompass Music Director/Arranger and Jay Leonhart on bass.

Encompass New Opera Theatre is dedicated to the creation, development and production of new music theatre and contemporary opera, as well as the revival of important musical works by American and international composers. Since its inception in 1975, Encompass has produced over 68 full-scale productions with orchestra and staged readings of over 165 new works from jazz and cabaret to musicals and opera. This year’s gala was as much a tribute to the incredible, ongoing work of the company—which survived a pandemic that forced many worthy institutions to shut down—as it was to the 2022 honorees, Danny Burstein and Chita Rivera.