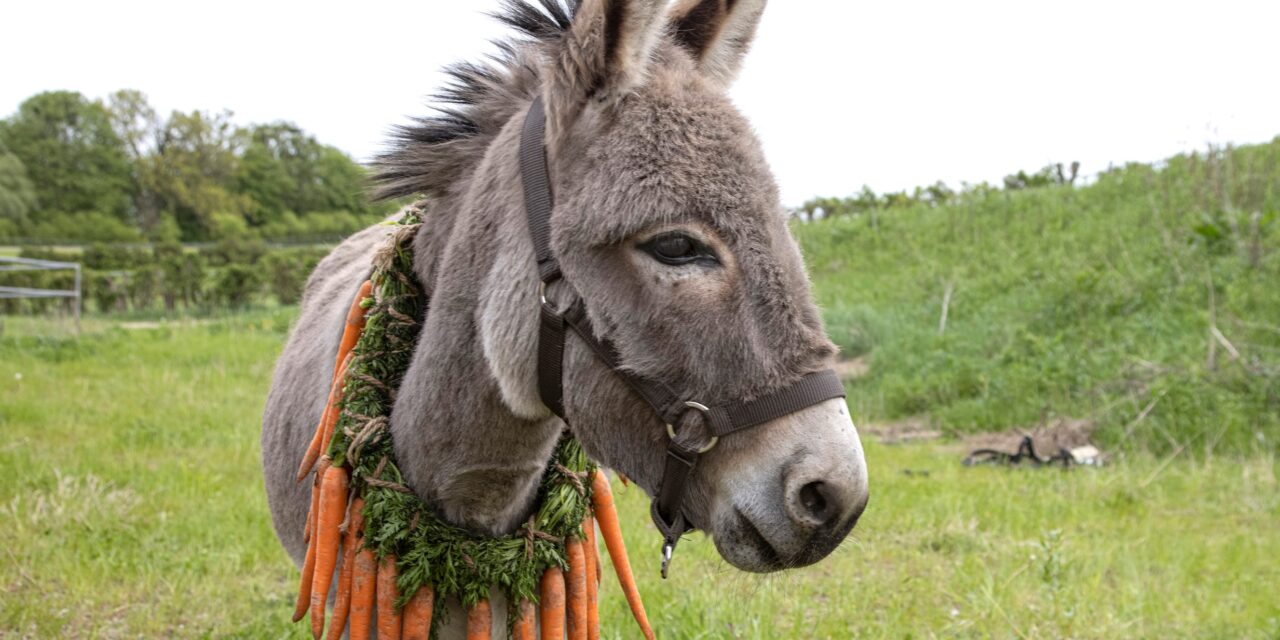 A whimsical, picaresque adventure told through the viewpoint of a donkey, Jerzy Skolimowski’s EO is a stunning film, visually haunting and poetic. The legendary Polish filmmaker responsible for Moonlighting (1982), which won an Oscar for best screenplay, teases his audience with a nod to another film Au Hasard Balthazar (translated “Balthazar at Random”), also about a donkey, though Robert Bresson’s conceptualization is different.

Bresson’s 1966 black-and-white drama, Au Hasard Balthazar, focuses on human beings and their relationship to a donkey as its ownership changes to various brutish individuals. Skolimowski’s film focuses on the donkey EO and conveys EO’s sentience cinematically, so we identify with him and stand in his shoes.

The heart of EO’s journey occurs after he escapes and wanders through the European countryside, attempting to find his way back to his love, Kasandra (Sandra Drzymalska), EO’s circus performer companion. It’s through her eyes that we note the innocence, beauty and sweetness of the animal. Not everyone sees EO as she does. Indeed, love is in the eyes of the beholder and EO knows the difference between loving human beings and cruel ones.

Kasandra got to know EO when he was raised in a circus and was part of a Polish circus act with her. She adores him and treats him as an equal being. EO appears to understand her and return her love. Ironically, EO and Kasandra must be separated as a function of political correctness. Animal rights activists oppose EO being with the circus. However, instead of researching the well-being of EO and his bond with Kasandra, they protest EO’s “enslavement.”

The idea, of course, has merit. However, their attention to a philosophy without researching the attachment and bonding between performer and their animal companion in each particular case is a perversion of their activism. Thus, in “saving” EO from “enslavement” of a life he has always known, in effect they are damning him to a destiny he cannot control, apart from escape and retreat back to Kasandra’s love and care.

Skolimowski sardonically criticizes this aspect of the politically correct modern world that makes determinations without thorough examination and research of the situation. Thus, when EO is “freed” from the circus and sent on his way, he escapes from the “freedom of his destination,” and becomes enslaved in a different way. His move to return to Sandra sets him on a course that is subject to the fates. His situation becomes an ironic reversal of what the political activists attempted to bring about.

Skolimowski’s imagery as EO moves through unfamiliar terrain is memorable. For example, in one segment of his journey EO is in the forest darkness, as shimmering light illuminates his donkey silhouette and mists rise from the forest floor. Such images resonate with sheer loveliness. From the unusual sounds of the forest, the director focuses on the owls, coyotes and wolves that create the eerie sounds EO reacts to. Skolimowski conveys that EO is unsettled, and afraid of the unfamiliar sounds and the darkness. However, with inner resolve and strength, EO continues on his mission throughout the night into the morning. Emotionally, we connect with him as a sentient being with feelings and intentions.

When EO wanders into the spectator area of a local football game, and he stands and watches the team on his side wins, they adopt him as their mascot. They party and celebrate their win, but the opposing team seeks them out at the bar, and they brawl. Not sparing EO they beat him badly and then leave as he lies wounded on the ground. We empathize with him and deride the violence of the infantile sore losers.

In a surreal dreamscape, the director shows EO dreaming that he is a robot-like animal in red, color detail, foundering and attempting to run away. When EO wakes he is in a rehabilitation center for horses and other animals, once again in cages but this time healing.

The irony of EO’s situation is underscored. The well-meaning activists made the situation much worse for EO than he experienced as a circus performer where he received love and adulation. It is obvious that the remembrance of this experience is why he tries to return to his past and the place where he was happiest.

When he is handed off to a driver of a horse trailer who will take him to a farm, the situation moves from strange to weird. The driver is killed and a young man whose car breaks down takes over the horse trailer and goes to his home, a wealthy estate owned by the young man’s mother. Once again EO becomes a pawn of fate, when he walks out of the estate, leaving the son and mother arguing.

There is no spoiler alert. You will just have to see EO and find out how Skolimowski concludes his metaphoric tale of the wanderer in exile, set “free” to only search for his past that he can never reclaim again. Notable for the gorgeous visual imagery, joy and humor contrasted with the alienating savagery manifested by the modern world, EO’s journey is one we identify with emotionally.

PhotoCourtesy of Janus Films and Sideshow