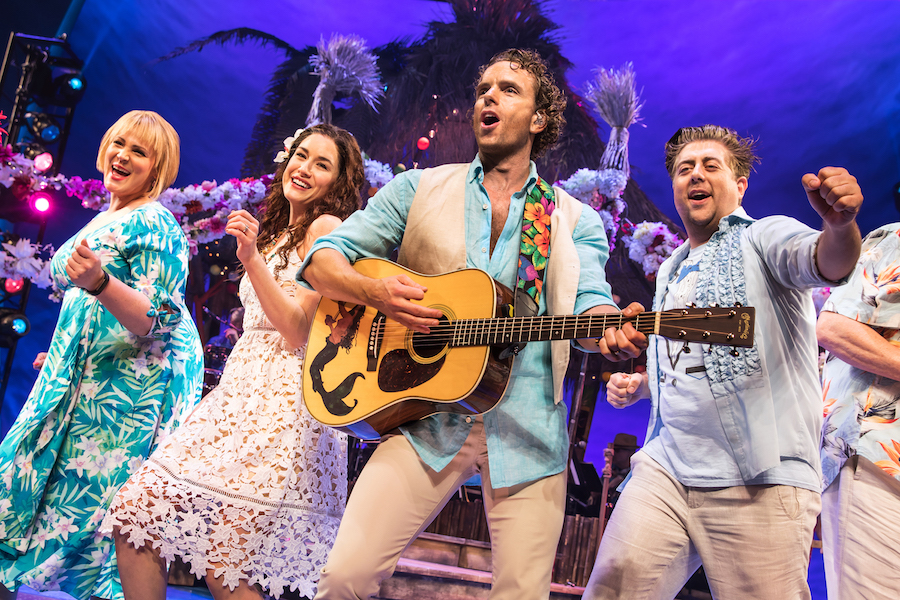 You’d be hard pressed to find someone not intimately familiar with the Jimmy Buffett 1977 soft-rock hit, “Margaritaville,” a catchy reverie about life on a Caribbean island. A brilliant businessman as well as capable musician, Buffett has had a number of moderately successful hits in his nearly 50 year career, but he has dined out on “Margaritaville,” having created an eponymous chain of restaurants, resorts, a clothing line, foods, and, of course, a tequila touting his tropical theme.

This and other business ventures have led him to an estimated net worth in the half a billion dollar range. He owns sports franchises, writes books (three number one best sellers so far), has written soundtracks for, and appeared in, television and movies. So it only stands to reason that he’s now bringing his brand of island living and loving to the Great White Way in the guise of Escape to Margaritaville, which opened tonight at the Marquis Theatre. Escape to Margaritaville, like other jukebox musicals that celebrate popular artists (Jersey Boys, Gloria Estefan’s On Your Feet!), pieces together a narrative from a large selection of Buffett’s hits. The formula has potential for disaster, but the hits in Buffett’s catalog already seem to have a linear, sometimes autobiographical (“Son of a Son of a Sailor”) narrative: a tropical, vacation-themed exodus which is often self-referential, as in “It’s Five O’Clock Somewhere,” a celebration of day drinking in which Buffett says, “I’ve been to Margaritaville” (wonder if he meant the place in the song or his restaurant?).

With legions of almost religiously devoted fans—known as “Parrotheads”—who follow him with as much fervor as any Deadhead ever afforded Jerry Garcia, the mere inclusion of his better-known songs almost guarantees the show’s success. Buffett’s songs are like extended versions of your favorite ad jingles, saccharine American pop standards: so catchy, such fun, but leaving nothing behind. Maybe that’s why alcohol is such an important part of the mix.

But the show is punctuated with other highlights which please even the not-so-zealous. Greg Garcia (“My Name is Earl”) and Mike O’Malley’s (“Shameless”) book creates an easy-to-follow romcom-esque narrative: pretty young, uptight geologist Rachel (Alison Luff) takes her fun-loving bestie Tammy (Lisa Howard) for a bachelorette island getaway the week prior to Tammy’s marriage to the boorish and controlling Chadd (Ian MIchael Stuart). Once on the island Rachel meets local house musician/lothario Tully (Paul Alexander Nolan) and Tammy encounters sweet, buffoonish barman Brick (Eric Petersen). By week’s end the two couples are very much in love, very much in spite of themselves and circumstances. Garcia and O’Malley’s storyline derives from (almost too literally at times) and blends nicely with the songs. However, their in-between banter is painfully corny, top-loaded with trite (often R-rated) puns and cliché banter, more worthy of an episode of “Hee-Haw” than Broadway.

Doesn’t matter, because it works for the festive audience that has been liquored up by the countless blenders churning out (what else?) margaritas in the lobby. The formulaic storyline is merely incidental, a vehicle for delivering the show’s 27 songs. Mostly it works, but sometimes a plot detail is merely a means of wedging in a song, such as the improbable stack of cheeseburgers in a bar that lead to the popular and iconic “Cheeseburger in Paradise.” The audience, mostly baby boomers—some clad in Trader Joe’s-style cabana wear and ornate hats shaped like parrots or cheeseburgers—sing, shout along with, or gesticulate to the numbers, reminiscent of a screening of The Rocky Horror Picture Show.

In a recent interview with the NY Times, Buffett commented that “people can smell it if it’s not real,” leading to an explanation for why he sent Nolan, a light-skinned Canadian, to a tanning salon so that he’d look like a bronzed island denizen. But, by definition, none of Buffett’s manufactured Caribbean vibe is any more real than the world of Spongebob Squarepants, which this production often brings to mind. It is, however, a reasonable facsimile of vacation island paradise, which is all his fans are looking for. What’s real here is the Broadway “oomph” that director Christopher Ashley (Come From Away) and choreographer Kelly Devine bring to it. What this adds up to is another Buffett-inspired marketing masterstroke. Drenched in simple syrup, but so beautifully garnished you fail to realize it’s just empty carbs. It all works, anyway. While it feels more suited to Branson, Missouri or Las Vegas, Escape to Margaritaville is all but certain to be a monster hit on Broadway that will likely run at capacity for years on end. Undoubtedly, the show will be franchised into major market cities, with Buffett laughing all the way to the bank, continuing to cash in on one popular song. Kudos, Jimmy. Let’s all have another round. 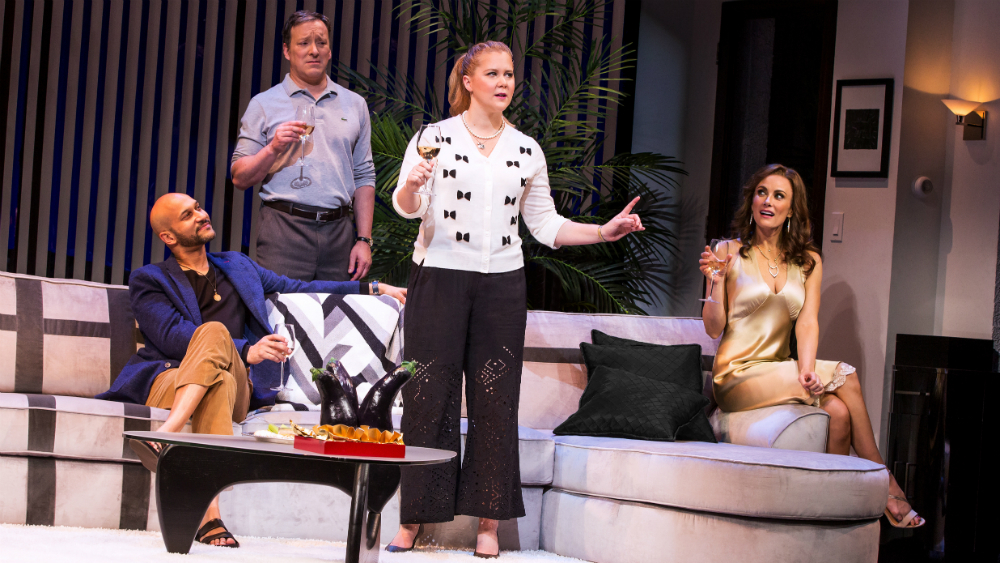 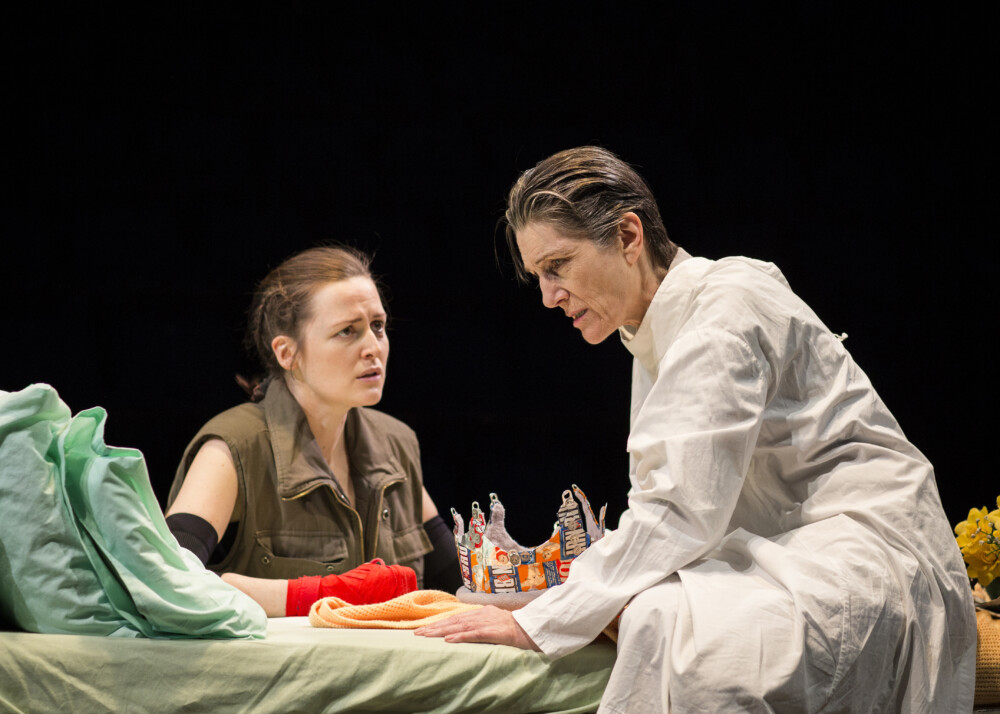