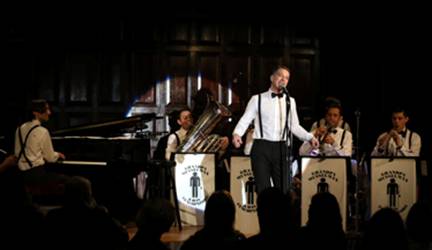 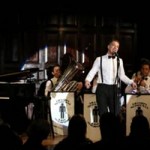 An entertaining program in a beautiful space marred by too much talk.

Launching the Live from Gramercy Park Cabaret Series at the Players Club, Euan Morton, backed by Grandpa Musselman & His Syncopators, presented a program of vintage 1920s and 1930s songs emulating and honoring Dixieland and other early jazz forms.

The Musselman band, led by Matt Musselman on trombone is wind heavy with saxophones (Vince Nero), trumpet (Russell Moore), tuba (Dan Peck) plus Bryan Reeder, pianist and arranger and Will Clark on drums.  The arrangements were rough at the edges with a pleasant feel of improvisation, matched by the easygoing, soft-edged tenor of Mr. Morton.

The program of classic American Songbook numbers was well-chosen, beginning with a nervously energetic “I’ll See You In My Dreams” (Isham Jones/Gus Kahn) followed immediately by a laidback “Stardust” (Hoagy Carmichael/Mitchell Parish) which featured a long trombone solo by “Grandpa” Musselman.  “It Had to Be You” (Isham Jones/Gus Kahn) with a jaunty tuba obbligato giving this number a true Dixieland sound.

Morton took the robust ballad “Softly, As In a Morning Sunrise” (Romberg/Hammerstein) from the operetta The New Moon and gave it an off-the-cuff, upbeat interpretation, while two other classics were crooned quietly:  “Smoke Gets in Your Eyes” (Kern/Harbach) and “What’ll I Do” (Berlin).

Morton appeared not to trust his choice of songs to paint a portrait of a golden age of songwriting.   For some reason he decided to created an awkward back story.  His scenario began with him and his band, the Tartan Army, arriving at Ellis Island to begin a tour of the United States.  Unfortunately, the story quickly became a disorganized—and seemingly improvised—series of vignettes that were not very illuminating and often baffling.  He even managed a flat-footed reference to Hitler which was a downer in the middle of such a fluffy program.  His fictional across America automobile journey did yield one bonus, a straightforward rendition of the Christian/Scottish hymn “Abide With Me” sung in spiritual support of the columns of Depression era migrants seeking greener pastures in the West which the fictional Euan witnessed.  However, following this with “Fascinating Rhythm” (Gershwins), was jarring.

This concert featured a very talented singer in top form with a youthful, vigorous band in a handsome, historic venue, but desperately needed editing and the objective eye of a strict director.

Information about other Live From Gramercy Park Cabaret events:  www.stageworksmedia.com