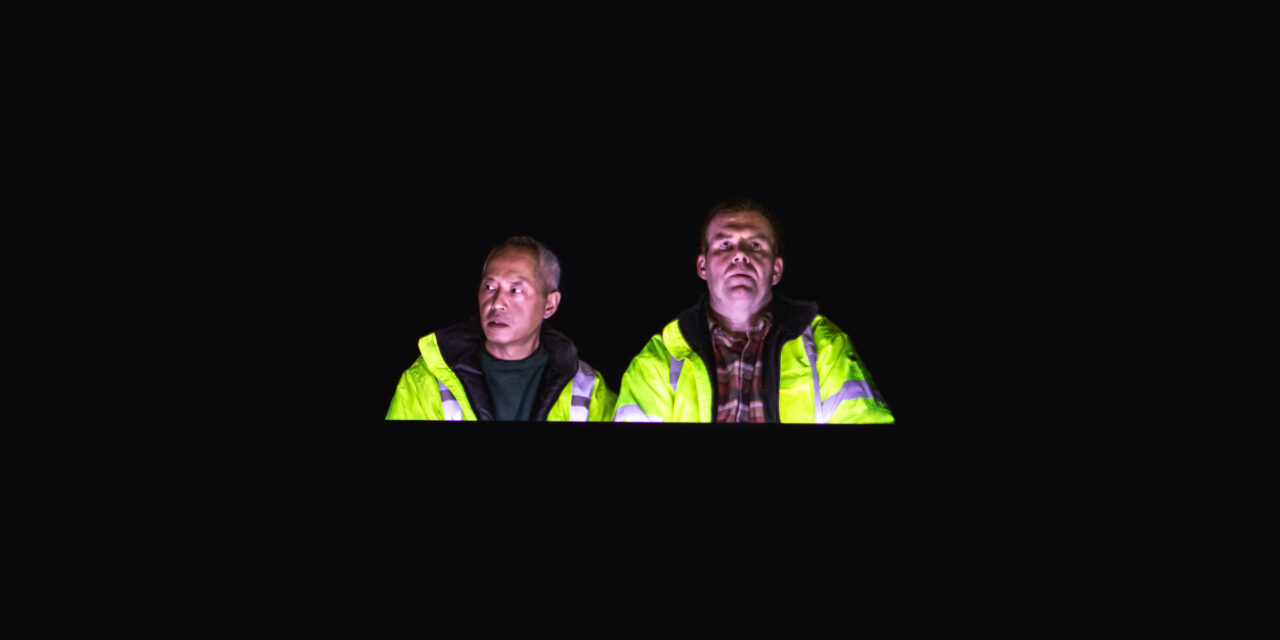 If the title of Will Arbery’s new comedy-drama from the New Group sounds confusing, just put the emphasis on “climbing” and say it aloud as if it were a newspaper headline, which is how the title is introduced in performance (it’s also the least confusing aspect of the play). Its four-person cast contains characters each adrift in their own sea of worries, which one of them describes as “the thing under everything and how big it is.” If that sounds somewhat obtuse, so is what unfolds over this intermissionless 95 minutes in the company of these extremely nervous people.

This is the third play of Arbery’s I’ve seen in New York. The first, Heroes of the Fourth Turning was a finalist for the Pulitzer Prize (deservedly so). Its 2019 production at Playwrights Horizons was highly charged with original political hot-speak that showed off his first-rate skill with dialogue. However, his Corsicana (2021), which also premiered at Playwrights, mystified me. Autobiographical in nature, it caromed about like balls on a billiard table without making the case for it being a play. Now with Evanston Salt Costs Climbing, Arbery has crafted something more in the absurdist realm, which speaks volumes for his versatility. In fact, aside from his razor-sharp humor, it’s difficult to comprehend that all three of these plays are written by the same person, which I hope comes off as the compliment it’s intended.

The main players are essayed by an outstanding cast, all of whom are in the grip of unknowing fears. They panic over their livelihoods, their sanity and the fate of the planet in equal measure. Some are better acclimated to it, as when one character admiringly says to another, “I think the terror in your heart about it all ending is cool.” Its plot concerns three employees of a city-managed company that salts roads during Evanston’s ever-increasing brutal Midwest winters. The boss, Jane Maiworm (Quincy Tyler Bernstine) is the assistant director of Public Works, a highly competent manager, though anxiety ridden—something she shares in common with her daughter, Jane Jr. (Rachel Sachnoff), a thirty-something who is something of a basket case. The two snow removal workers who share the same vehicle are Peter (Jeb Kreager) and Basil (Ken Leung), antithetical in their worldviews. Peter is a dark soul, plagued by matricidal and suicidal thoughts and Basil, a Greek immigrant, is sunny in nature, although with a secret past. Things become complicated when Maiworm, who is on a career path to bigger and better things, advocates hard for an environmentally friendlier system that would make salting roads obsolete (as well as the jobs Peter and Basil hold).

The prolific use of the “f” word in the play worked rhythmically and didn’t feel overused, mainly due to the actors’ full-on commitment to the language of the piece. Arbery has a facility with words that is mellifluous and even such lines as “the cold has entered my heart” echo with a certain nobility coming from these awkward folks. “My brain was like a baked potato” was another that endeared me to one of the characters, as well as “sometimes I feel guilty by our little happiness.” Or perhaps my favorite, on the vagaries of fast food, “I’ve been to hell and back with Dominos.”

The always reliable Quincy Tyler Bernstine brings a world-weary quality to Maiworm in addition to a quirky sense of comedy that makes each of her entrances worth waiting for. As her daughter, Rachel Sachnoff is a neurotic mass of contradictions with a dazzling ability to turn on a dime. Basil is played by Ken Leung, who is never less than fascinating to watch. To see this Chinese-American actor portray a thickly accented Greek-American and not lapse into parody is a major accomplishment. Rounding out the quartet is Jeb Kreager, part of the original cast of the previously mentioned Heroes of the Fourth Turning, for which he won an Obie Award. He has the most problematic role in the play and pulls it off not only with ease but with a rare combination of sensitivity and recklessness.

A simple and well-designed two-tiered set by Matt Saunders is effective and well-utilized in Danya Taymor’s staging. Her handling of the actors is impeccable and, having previously worked with the playwright on Heroes of the Fourth Turning, this is an obvious collaboration of kindred souls. Costumes by Sarafina Bush and the lighting by Isabella Bryd are excellent, as is the sound design by Mikaal Sulaiman (with additional work from Evan Cook).

If you accept the obfuscations which abound in Evanston Salt Costs Climbing, the payoff comes in its ability to pull off a kind of luxuriousness in its characters’ inarticulateness. At least that’s what I was able to get from it, which is more than enough to recommend it.