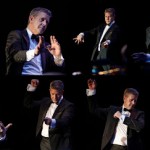 A Tribute to Jerry Herman was presented on March 1, 2014 at Pace University as part of its American Showstopper Series led by Fred Barton and his 13-piece orchestra with a sensational cast of singers and dancers on the stage of the Michael Schimmel Center for the Arts. The direction and choreography was by Scott Thompson and the show was produced, orchestrated and hosted by Fred Barton.

A first rate cast of theater veterans was assembled including Klea Blackhurst, Toni DiBuono, Jeffry Denman, Tari Kelly, Damon Kirsche, Beth Leavel, Karen Murphy, Lee Roy Reams along with three remarkable newcomers: Lianne Marie Dobbs, AJ Hunsucker, Jesse Luttrell and the Scott Thompson dancers. Jerry Herman is a phenomenon in the musical theater world with many major hit shows, including Mame, La Cage Aux Folles, Mack and Mabel and Hello Dolly, celebrating the 50th Anniversary of its opening this year. There are only a few composers who write both music and lyrics and are as prolific as Jerry Herman.  I’ve been to many tributes the past few years to this legendary songsmith who turned 80 in 2011 and this was the best tribute show that I have ever attended. Everything about this production was sensational and thrilling from beginning to end.

Fred Barton was a charming host and his enthusiasm for the music of his subject was evident.   Fred opened singing “It’s Today” from Mame and saying that this song was in Herman’s first off-Broadway revue Parade (1960) that starred Dody Goodman and Charles Nelson Reilly.  Tari Kelly and Jeffry Denman performed, “There Is No Tune Like a Show Tune” from Parade and then sang the song with the same melody that became “It’s Today.” Beth Leavel and Klea Blackhurst, with their big Broadway belt voices, both played Dolly, one at Goodspeed, one at the Cape Playhouse.  Klea sang “Just Leave Everything To Me” written for the film and two numbers cut from the show but added for Ethel Merman when she stepped into the role, “Love, Look In My Window” and “World, Take Me Back.” Leavel sang the angry “So Long Dearie” and the hopeful “Before the Parade Passes By.’ Lee Roy Reams is always terrific but outdid himself in this show. He starred in the first Hello Dolly revival and wowed the crowd with a medley from the show, “Put On Your Sunday Best” and “It Only Takes a Moment.”  He then sang a song excised from the show out of town, “Penny In My Pocket” showing how Horace Vandergelder became Yonker’s most renowned  half-millionaire.

Lee Roy was scheduled to be in La Cage when the show transferred to another theater, but the Mark Hellinger Theater was turned into a church, so it never happened.  He finally got the chance to sing “I Am What I Am” and there never was a better or more exciting rendition. Mack and Mabel (1974) was not a hit, but has been revived many times and the score is wonderful.

Damon Kirsche, who came in from LA and has a wonderful voice and stage presence, played the Mack Sennett role singing “Movies Were Movies” and “I Won’t Send Roses.” Jeffry Denman sang a moving “Time Heals Everything” and also scored with “Las Vegas” from Miss Spectacular, a show commissioned by Steve Wynn but the project went into limbo when the hotel was sold.  However, a concept album was made. There was one show stopping number after another.  Newcomer Jesse Luttrell sang a fabulous “Two A Day” from Parade, Tari and the Scot Thompson Dancers were amazing in “Tap Your Troubles Away.” The hit show Mame was represented with AJ Hunsuker singing, “My Best Girl,” Karen with a bang-up version of “Boy With The Bugle,” and Beth and Toni were amazing in the bitchy duet “Bosom Buddies.”

The most fantastic number and highlight of the evening was the dueling divas of Mame and Dolly, each trying to sing their big numbers as the other was being pushed aside. The dancers ran from one to the other to try to back them up.  It was a beautifully staged number and terrific fun. The show closed with the entire cast on stage singing Jerry’s great anthem to his philosophy of living life in the moment, “The Best of Times,” and the audience couldn’t help but join in. It certainly was “The Best of Times” for anyone lucky enough to get tickets to this remarkable evening. Kudos to Fred Barton and everyone involved in this exceptional production and it is hoped that this show can be repeated at Pace or moved to another theater for a long run.

For more information and to purchase tickets, please visit http://schimmel.pace.edu