All in the Family: Judy Kuhn Celebrates Three Generations of Music 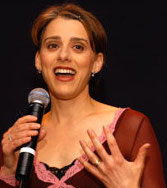 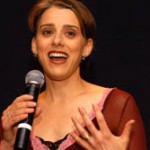 Most people would agree that musical ability runs in families. One thinks of Bach and his children. Mozart and his father and all those family acts, from The Jackson 5 to The King Family. So it is entirely fitting that Lincoln Center’s American Songbook series should devote an evening to one of America’s most famous musical families.

Judy Kuhn sings Richard Rodgers, Mary Rodgers, and Adam Guettel celebrated three generations of musicians, father, daughter and grandson, whose work has dominated the American musical scene for almost a century. Together these three composers incorporate many styles and periods of American music.

Richard Rodgers, with lyricist Lorenz Hart, composed music characterized by its sophistication, with lyricist Oscar Hammerstein, by its sentiment. After Hammerstein died, Rodgers worked with lyricists Martin Charnin, Sheldon Harnick and Stephen Sondheim. He even wrote his own lyrics for No Strings.

Mary Rodgers is best known as the composer of Once Upon a Mattress, the author of children’s books and the mother of Adam Guettel. At age 50, Guettel has exhibited an ability to work in a variety of genres, from the bluegrass inflected Floyd Collins, to the romantic The Light in the Piazza.

Kuhn, a classically trained Broadway veteran, backed by a band that included lots of strings (cello, guitar, bass, violin) gave a lush, almost operatic treatment to many of the songs. Todd Almond’s arrangements and Josh Clayton’s orchestrations are original if not terribly exciting.

Fans of Guettal’s must have been happy that Kuhn sang three songs from Floyd Collins, as well as two from The Light in the Piazza and two from Myths and Hymns. But, except for “Song of Love” from Once Upon a Mattress, it is possible many in the audience had never heard the other songs composed by Mary.

There were seven songs by Richard Rodgers with his various collaborators, hardly enough to give anyone an adequate idea of the quality or quantity of Rodgers’ output. On the other hand, certainly “if I Loved You” was more than enough to remind us of the great genius of the beloved patriarch. And Kuhn’s performance was more than enough reason to attend the concert.