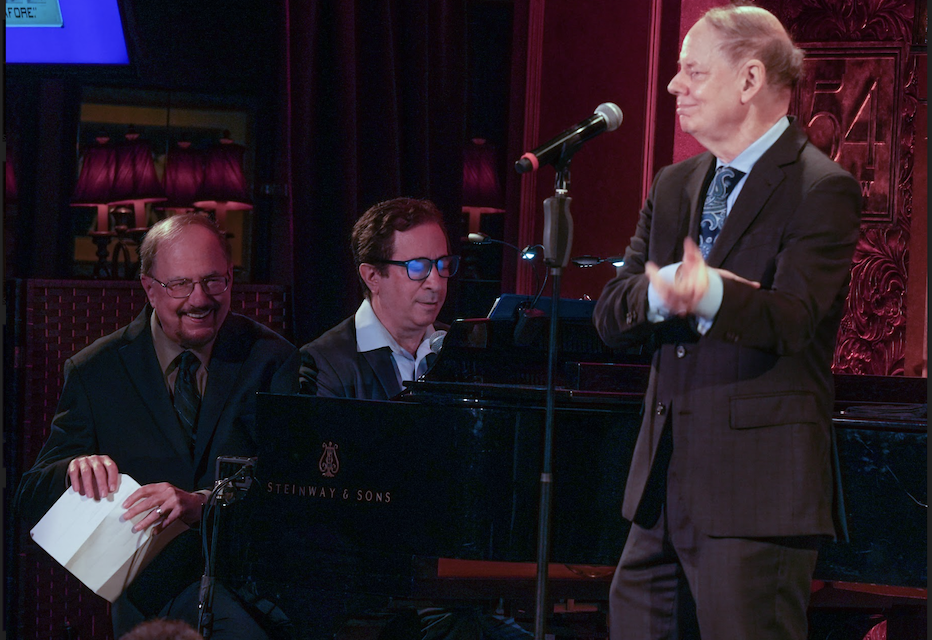 The Broadway Internet Database begins with a July 1899 listing for The Rounders at the Casino Theater (Broadway at 39th Street). Slightly over 70 shows opened in the rest of 1899, but that year was by no means the first of what we now consider (in a compact Theater District) Broadway shows. Sir Arthur Sullivan and William S. Gilbert’s HMS Pinafore made its New York City debut in 1878, for instance. In Fifty Key Stage Musicals: The Concert at 54 Below, this work was the first of 10 shows chosen from the key 50 to open the evening. Appearing to introduce and talk about it were brothers Rupert and Richard Holmes, whose love of Gilbert and Sullivan goes back to their childhood. Richard went on to become a major interpreter of the works on this side of the pond. He sang “When I Was a Lad” (The Rt. Hon. Sir Joseph Porter) and “Fair Moon to Thee I Sing” (Captain Corcoran)—roles he’s played many times— and to that we say we “give three cheers and three cheers more.”

That same cheering distinction goes to host Rob Schneider for choosing to represent from the G&S canon. There was a time when every school child knew something of the G&S operettas. Not so much anymore, and it would be a shame to see the work of the duo slip into oblivion. But such is the purpose of the book Fifty Key Stage Musicals edited by Schneider. Beyond the hard choices of picking out a mere 50, education is key. As part of the Routledge Key Guides series, the book centers on works that were seminal in altering the landscape of musical theater in the English-speaking world. Schneider hopes to educate beyond the book by offering this concert free on YouTube.

One such landscape-altering work was Shuffle Along, a 1921 stunner that featured an all-Black cast and the music and lyrics of Eubie Blake and Noble Sissel. It was revived in 1933 and 1952 but it’s from Shuffle Along, Or The Making of the Musical Sensation of 1921 and All That Followed, a 2016 tribute show to the original, that cast member Arbender J. Robinson offered “Low Down Blues” (Hank Williams—added to that show); Robinson’s delivery was straight Broadway (and not sung as a true blues) but who’s counting? Five years after Shuffle Along, No, No, Nanette opened on The Rialto. It was revived only once, and from this 1971 outing, Ed Dixon related hilarious stories about the eccentric and powerful theater polymath, Buster Davis, and sang the nine-o’clock number, “No, No, Nanette/Finaletto,” playing all the parts. The original production, by the way, was accused of shenanigans resulting in “The Curse of the Bambino” (Google it!).

The Threepenny Opera, based on The Beggar’s Opera, music by Kurt Weill and book and lyrics by Bertolt Brecht, has an important history. It opened in Germany in 1928 as Die Dreigroschenoper. In March 1933, Weill fled the Nazis. In that same year, The Threepenny Opera premiered on Broadway, in English translation by Gifford Cochran and Jerold Krimsky. It closed after a dozen performances, but went on to six Broadway revivals, the first in 1954 with revised English translation by Marc Blitzstein. The show went on to a much greater sense of appreciation and success. From what is now a classic milestone of theater, Amy Jo Jackson sang “Pirate Jenny” (Seeräuberjenny) with the fierceness as befits a daydream song of intense revenge.

Moving into mid-century (the 20th, of course), music director-pianist Michael Lavine (whose talents on this show were extraordinaire) sweetly sang “Traveling Light”—dropped after the 1950 opening of Guys and Dolls. Lavine, by the way, is a massive repository of Broadway knowledge, has a huge sheet music collection and knows from cut songs. In 1959, Gypsy (Jule Styne, Stephen Sondheim) debuted; in 1964, Jerry Herman’s Hello, Dolly! hit the Great White Way, and in 1966, John Kander and Fred Ebb’s Cabaret was on the boards—all three immensely popular and much-revived shows. A Mermanesque Mary Callanan belted out “Some People” to great applause, while the foremost interpreter of Herman on the planet, Lee Roy Reams, once again demonstrated his showmanship in a medley of Hello, Dolly! songs. Reams has played Cornelius Hackl and Dolly (!) and directed and choreographed the 1995 Broadway revival, and that’s just scratching the surface. Two besties and toasts of Broadway, the irrepressible and hugely talented Anita Gillette and Penny Fuller, as two Sally Bowles, reminisced and sang a delightful medley from Cabaret (which is set in the Berlin of the Weimar Republic, the exact time and place in which Weill/Brecht were very active).

The penultimate performance of the evening fell to André De Shields, Tony-winner for his role as Hermes in Hadestown—and a performer who has attained celestial status on Broadway. Although De Shields was in the original cast of Hair, and was active on Broadway in 1973, it was 1979’s The Wiz that launched what would become a magnificent career on The Rialto. With a book by William F. Brown and music attributed to Charlie Smalls (that’s another story), The Wiz with its all-Black cast, was billed as “the super soul musical.” That it was. Another showman from head to toe, De Shields can be relied on to be unique, sensational and educational. Who else could begin with a discourse on existentialism referencing Trappist monk, writer, theologian, mystic, poet, social activist and scholar, Thomas Merton—and then, smooth as glass, segue brilliantly into a now iconic Wiz song, “Believe in Yourself.”

As a truly grand finale, Heather MacRae, Natalie Mosco, Deborah Offner, Marjorie “Mudra” Lipari, Molly Stilliens and Arbender J. Robinson, presented backstory, reminiscence and a medley of songs from Hair: The American Tribal Love-Rock Musical, with a book and lyrics by Gerome Ragni and James Rado and music by Galt MacDermot. Development began in 1964, with a Broadway opening in April 1968. The 1960s was a time of upheaval and social progress deriving from major social unrest. Hair captured that in its music and narrative—and it also brought rock ’n roll to Broadway. Hair has been so hugely popular and significant that it has been playing somewhere on earth since its debut. During the curtain call of Hair, the cast reprised “Let the Sun Shine In” and brought audience members up on stage to dance.

And so it was, with no dancing, that this was the rousing ending to Fifty Key Stage Musicals: The Concert, with the happy audience singing and clapping away.