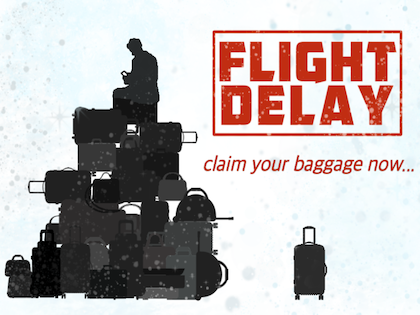 At an intermissionless one hour-forty-five minutes, Peter Anderegg’s new play Flight Delay never really gets off the ground. Though it has in its plot description a worthy subject for drama, the playwright is unable to run with the premise and craft something worthy of our time.

“Snowed in at an airport, a father meets one of his estranged middle-aged twin sons but doesn’t know which, and his son is not about to tell him, not while there’s a chance to settle old scores. With nowhere to go and little to do, the son alternates identities as he pursues his father from one waiting area to the next.”

Not bad, right? Unfortunately, the “settling of old scores” becomes tiresome and the twins aspect to the story isn’t nearly utilized to its full potential, squandering the the chance to create a thoroughly original mystery. Instead, Anderegg settles for talk. And more talk. And yet, even more talk. There’s no change in the characters, even though they learn things they didn’t know, which stymies our desire to hear more or even care. It’s the sort of writing where characters leave the stage on a flimsy pretext in order so that they can use their phones to clunkily fill in information for the audience. You know a play feels written when someone responds with a line like “That’s axiomatic.” No one talks like that. Or the preposterous, “What am I going to do with my issues? They just went super nova!”

This is basically a father-son story, though the offstage mother is supposed to be a dramatic link towards discovery, crisis and resolution. It brought to mind a favorite short story of mine, “Reunion,” by John Cheever, written in 1962. Briefly, it’s about a young man’s desired hope to reconnect with his divorced dad during a brief transfer of trains at Grand Central Terminal. What Cheever manages to do in a few short pages is far more potent and devastating that what unfolds in Anderegg’s overwritten and thin play. Even when it leaves the airport in its second to last scene, it’s an unwise decision to add a character (the son’s mother’s longtime best friend who is only briefly mentioned), as it fails to add wanted conflict since we have nothing invested in this person. We’re also supposed to believe that the son, a writer, has no insight or imagination to have thought that his mother might be gay, or that his Aunt Charlie her longtime lover. It doesn’t compute.

Played on a postage stamp-sized stage at the Tank Theatre, director Kelly Morgan accomplishes the task with skill, considering the tight circumstances. And the two lead actors are not to blame for their performances due to the weakness of the material, though a third wheel, Ginger Grace, in her one scene, wildly overplayed the drunk aspect of Aunt Charlie (also, not wise to introduce a new character with fifteen minutes to the play’s conclusion and have her inebriated). Zach Wegner as either Frank or when he pretends to be Fred (I think I’ve got that right), offers a plausible performance of an unplausible person. And as the father, Stephen Bradbury brings an appropriate weariness to the role and plays his frustrations in realistic fashion (perhaps he was as exasperated by some of the dialogue as I was?). There was so much more that could have been done with the father who lacks any sort of menace, which could have gone a long ways towards creating a more tense environment in which the play might breathe. Concurringly, the son lacks shiftiness, even though he attempts to make his identity a puzzlement in the long first scene. He should have been a manipulating shapeshifter with the potential to keep the audience on the edge of their seats.

Given it being an interesting idea for a play, Flight Delay is a woefully missed opportunity.

Flight Delay is being presented December 1-18th by the Thisbe Theater Company at the Tank Theatre, 312 West 36th Street, NYC 10018.