Florence Henderson – Life is NOT a Stage 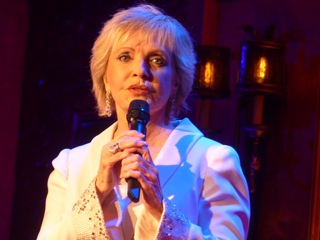 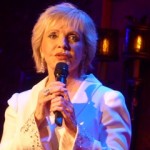 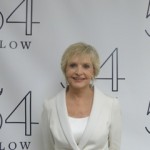 Everyone’s favorite TV mom, Florence Henderson, made her 54 Below debut in “Life Is NOT a Stage” a cabaret act based on her best-selling book.

Long before there was Carol Brady, the inexhaustible mom of The Brady Bunch, there was Florence Henderson, a young woman from rural Indiana with aspirations to come to NY to star in Broadway musicals. On Oct. 29, 2013 she told her fascinating life story in patter and song at 54 Below accompanied by her co-writer and musical director Glen Roven and four beautiful young woman: Julie Ferrara on clarinet, flute, bass & clarinet, Laura Bontrager on cello with back-up vocals by Cynthia Leigh Heim and Hallie Silverston.

The show opened with terrific clips of Florence’s many appearances through the years;  the Dean Martin Show singing “The Continental” and “Hernando’s Hideaway,” The Carol Burnett Show, Oklahoma with Gordon MacRae (1954), the Muppet Show, commercials for Polident and Wesson Oil (1976-1996), always looking beautiful and singing with that glorious expressive soprano voice.  Florence entered in a stunning and sparkly white pants suit that showed off her still youthful figure and opened with “Lifted” a song about what the audience thinks that she has had done to look the way she does. Bruce Vilanch, Glen Roven and Norman Martin wrote much of her amusing special material for this act.

The song “All The Lives Of Me’ really set up the different chapters in her life as she talked about being a daughter, mother, wife, Broadway and film star, and, of course, an iconic TV mom.  Her father was a sharecropper who married at age 50 to a woman 25 years his junior and proceeded to have 10 children.  Florence was the youngest and her dad was nearly 70 by then. She spoke of the grinding poverty of her youth with no electricity or running water and was encouraged by her mother to sing for money. To reproduce the experience, Florence sang “You Are My Sunshine” and then walked around the club holding a hat and encouraging audience members to fill it.  Once back on stage, she announced that whatever she raises, she adds her own check for that amount and gives it to charity, this night it was going to be BC/EFA.

At age 17 she came to NY and attended the American Academy of Dramatic Arts landing a chorus role in Wish You Were Here the first year. She auditioned for Richard Rodgers and Oscar Hammerstein and won the role of Laurie in the touring company of Oklahoma for two years (Barbara Cook was Ado Annie).  She later starred in Fanny and The Girl Who Came To Supper (with Jose Ferrer) on Broadway.  She married Ira Bernstein in 1956 (much to the dismay of producer David Merrick who agreed to give her a week off from Fanny) had four children during various shows, and the song “Me and My Babies” demonstrated how important the children are in her life.  She never thought this would happen, but she and Ira divorced after nearly 30 years of marriage. Fortunately, she found new happiness and remarried in 1987 “My Heart Stood Still” until his death in 2002.

Florence brought up the fact that you can be a star on Broadway but no one around the country knows who you are.  However, once you are on a TV series, millions get to see you and the game changes. The Brady Bunch ran from 1969 to 1974 and has never been off the air and as she says, “you cannot kill that show with a stick.”  Florence led the audience in the well-known Brady Bunch theme song and everyone knew the words.  Discussing her long and varied career, she brought up her stint as a TV Host on The Today Show, Hollywood Squares and even Dancing With The Stars in 2010.

Her many fans filled the room for this special one night only concert and she didn’t disappoint. Florence might not have the vocal chops that she had back then, but she was utterly charming, irreverent, funny and totally honest. There was a lot of patter, but it totally held my interest as the songs or parts of them were cleverly interwoven throughout to illuminate the stories. Florence ended the show with “Thank you, New York, I never had so much fun.”  Well, the audience felt the same way and it is hoped that she will return to 54 Below for a longer run so that more people can experience the many facets of this legendary and talented entertainer.