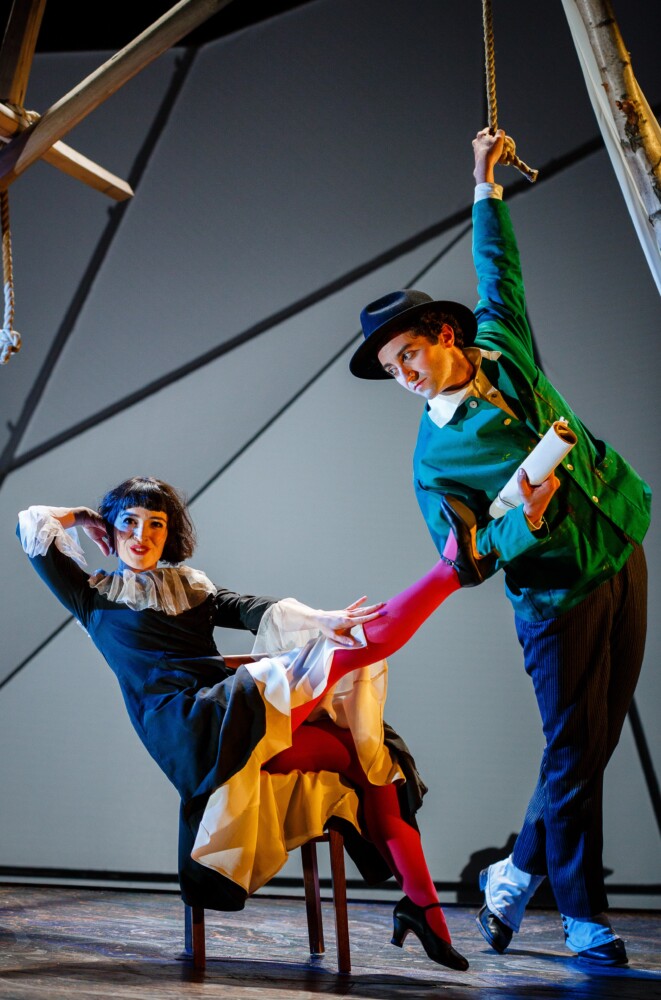 NYU Skirball will co-present the digital tour of Daniel Jamieson’s The Flying Lovers of Vitebsk, a play with music and dance directed by Emma Rice, on Friday, December 11 at 7:30 pm EST (available for streaming through December 18). Co-produced by Bristol Old Vic, Kneehigh and Wise Children with support from The Carol Tambor Theatrical Foundation, the play will be performed at the UK’s Bristol Old Vic in front of a live audience and streamed on demand to audiences around the globe. The actors and creative team will form a social bubble in Bristol ahead of their run, allowing them to mount the piece without social distancing. Closed-captioned and  audio described videos will be available on demand.

Inspired by the work of Marc Chagall — which includes the painting “Bouquet With Flying Lovers” — the play is set against the backdrop of the Russian revolution and chronicles Chagall’s relationship with his wife, Bella, as they navigate the turbulent world of Russian pogroms, revolution and romance. Emma Rice’s production is drawn in a theatrical language as fluid as Chagall’s paintings, and woven throughout with music and dance inspired by Russian Jewish tradition. It captures the vibrancy of Jewish culture in the vanishing world of early 20th century Europe. FLOV video link

The play features Marc Antolin (Marc Chagall) and Audrey Brisson (Bella Chagall), joined by a live band. It is written by Daniel Jamieson with direction by Emma Rice and music by Ian Ross. Set and costume design is by Sophia Clist, lighting design is by Malcolm Rippeth, with choreography by Etta Murfitt and sound design by Simon Baker.

Tickets are $20 and can be purchased online at nyuskirball.org/chagall/