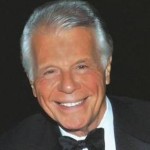 Frank Torren is Old School in the best sense of that phrase: dapper, handsome, impeccably attired and possessing a smooth, expressive voice. His program, “Moment to Moment,” at Don’t Tell Mama on May 14th, showed off his best qualities and, well, a minor short coming.   He started off with two “moment” songs, “Mine for the Moment” (Andre & Dory Prévin) and “From This Moment On” (Porter) both aimed directly at the audience rather than some vague love object.

He was more physically connected to “I Only Have Eyes for You” (Harry Warren/Al Dubin) combined with “Let’s Do Something Cheap and Superficial” (Richard E. Levinson), two light-hearted songs about love, the latter, lesser known, a cheery and charmingly silly proposition to a lover. He was particularly fine in “It Amazes Me” (Cy Coleman/Carolyn Leigh) which he delivered with a wide-eyed wonder, his face suddenly twenty years younger, a sentiment continued in “Moment to Moment” (Mancini/Mercer) about a mature man discovering love and adventure.

He had his “I Will Survive”-type moment in two songs by Michael Brown, “Sock Life In the Eye” & “I’m Not Through” which he followed up with a sweet “Fly Me to the Moon” (Bart Howard) which he dedicated to the cabaret legend Jan Wallman who was celebrating her 92nd birthday at Mr. Torren’s show!

Rick Unterberg was the witty collaborator on the piano.