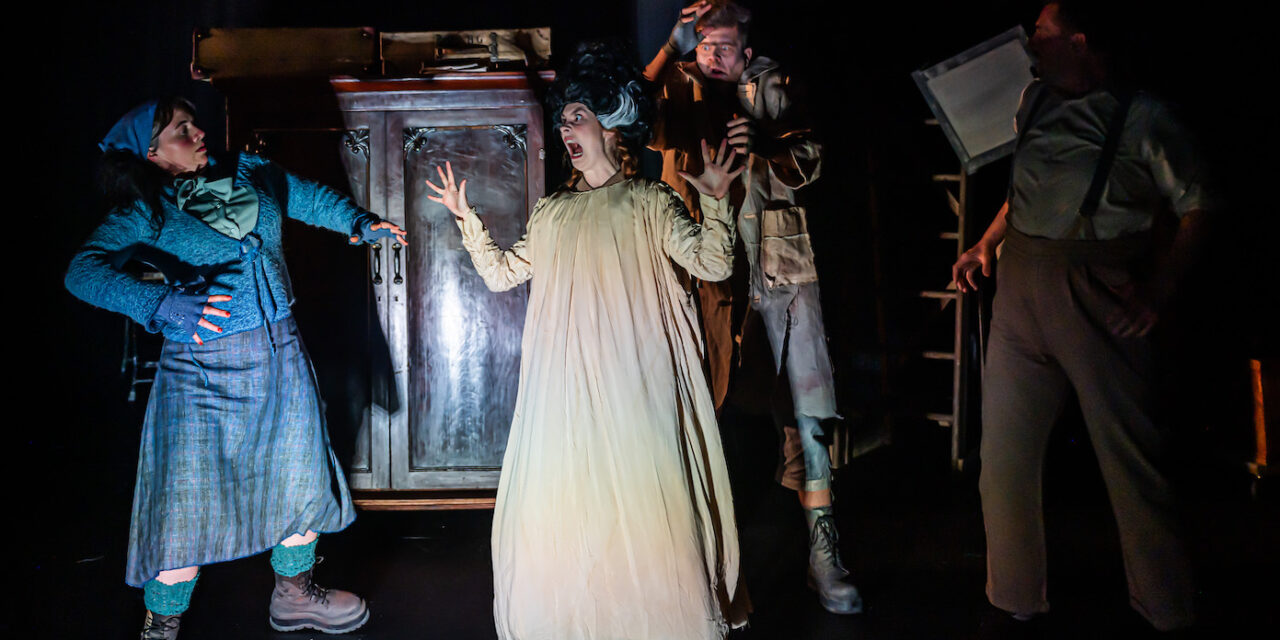 Victor Frankenstein had no idea what was in store for the creation he pieced together from the dismembered body parts of corpses. After drifting off on an ice floe—as Mary Shelly described in the end of her influential book—the Monster apparently bided his time before being discovered, and made into a full-fledged star, by Hollywood (decades after publication, in the 20th century). But then the movies stopped calling and the Monster simply gave up, crawling into a crevasse and freezing over.

That’s the starting point for Zoe Seaton’s sweet and supremely silly play, Frankenstein’s Monster is Drunk and the Sheep Have All Jumped the Fences, presented by Big Telly Theater Company, and now playing at 59E59 Theaters through January 28. It’s adapted from an award-winning short story by Owen Booth. On a tiny stage with the barest bits of furniture and props, the play celebrates two outsiders and the love they find and fight for without ever taking itself too seriously (or at all seriously).

At 75 minutes the play is short and fast-paced enough that, after a bit of a slow opening, the snippet-sized scenes will keep you smiling throughout. The cast—Nicky Harley as Her; Vicky Allen and Chris Robinson as the narrators and various townspeople; and Rhodri Lewis as the Monster—is charming, but it’s Lewis who steals the show. He is not the stiff-limbed Monster of films (except when he and his friends are drunk and do impressions of the Hollywood version as a goof), but Lewis creates a sense of the monster’s bulk and occasional awkwardness.

The Monster is discovered in the glacier by the largest, strongest woman in the nearby village, a woman with a reputation for drinking all the local men under the table and then taking up company with them afterward. The two fall for each other hard and fast, making love “in waterfalls and woodland clearings, in hay barns, on the summits of mountains during huge electrical storms” as two narrators, poised before old-timey microphones inform us.

When they argue, it’s about poetry (the Monster prefers rhymes), art (he’s not much for abstract expressionism) and an armoire that kinda freaks him out. At first the townspeople, who had already judged Her (as she’s called in the script) harshly, don’t take kindly to the newcomer; though when they come with pitchforks it’s “mostly out of habit.” But the Monster rescues a missing boy, becoming a local hero, and is welcomed into neighbor’s homes for dinner. After dinner he even tells the boy a bedtime story . . . haltingly, but successfully.

The Monster drinks too much—that’s how he loses his lover’s rare blue sheep—but still the couple successfully open a hotel. The Monster finds work manually operating the local ski lift before he gets recruited for some cheap 1960s horror movies in Spain. Along the way, she has an affair from which the marriage recovers, and he discovers weed, becoming a bit of a stoner.

But all that’s plot and really the story itself is not only thin, it’s kind of beside the point. The show, at its best, is a celebration of imaginative theatricality, whether it’s the Monster climbing a mountain that’s made out of a ladder, or when the armoire becomes the couple’s home (the doors swing open and we see them washing and drying dishes) and the hotel (the top transforms into the front desk).

There are also clever meta-moments: the Monster dreams he is back in Hollywood, having an affair with Elsa Lanchester (who played the title role in “Bride of Frankenstein”). And when the happy couple celebrates a birthday in the big city, they go dancing, doing joyful, even elegant turns as one of the narrators sings “Puttin’ On the Ritz.”

If that reference escapes you, please stop reading now to go watch Mel Brooks’ Young Frankenstein. It feels inevitable that this play pays homage to Brooks, the master of the absurd; and while it never ascends to the heights he once achieved, that’s okay because the Monster is afraid of heights, and this variation of Frankenstein’s Monster certainly makes for good company.

Frankenstein’s Monster is Drunk and the Sheep Have All Jumped the Fences. Through January 28 at 59E59 Theaters (59 East 59th Street, between Park and Madison Avenues) 75 minutes,no intermission. www.59e59.org