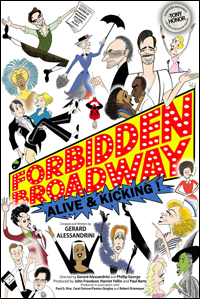 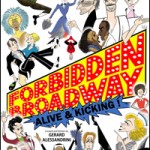 After a 10-month hiatus, Gerard Alessandrini’s FORBIDDEN BROADWAY, one of NYC’s best-loved and highly anticipated productions, happily returns to New York, beginning February 22nd at the newly refurbished Davenport Theatre (354 W. 45th Street, Between 8th and 9th Avenues) with FORBIDDEN BROADWAY; Alive and STILL Kicking, featuring brand new takes on the shows that opened in Forbidden Broadway’s absence:  Pippin, Kinky Boots, Matilda and Motown along with highlights from last season’s acclaimed and very popular edition: Once, Evita, Newsies, Book of Mormon, among others. Over the course of the spring, Alessandrini will continue to add new material to reflect the season’s openings, and unveil the new edition around the time of the Tony® Awards.

In a statement, Gerard Alessandrini said: “When we heard Les Miz was coming back for its third Broadway run, it was a wake-up call that it was time for us to resume. We just couldn’t rest in peace. So we’re picking up where we left off last April. And now feels like the perfect time to be back in New York: right in between seasons. There’s everything we didn’t get the chance to spoof last year, and a new avalanche of shows waiting to crash down on us. We’ll start with Pippin, Kinky Boots, Matilda and Motown, and as the season unfolds, we’ll add Rocky, Cabaret, Bridges of Madison County, Bullets Over Broadway, Aladdin, etc. Then we can officially open the new edition around Awards Season.”

The edition is created and written by Gerard Alessandrini, and directed by Phillip George and Mr. Alessandrini, with musical direction by David Caldwell and lighting by Mark T. Simpson .The show is produced by John Freedson, Harriet Yellin and Paul Bartz, in association with Paul G. Rice, Carol Ostrow, Paxton Quigley and Robert Driemeyer, Jamie DeRoy, Lawrence Poster and Tweiss Productions.

FORBIDDEN BROADWAY has been an unstoppable force in theatre since 1982, when Gerard Alessandrini created the first edition that lampooned the Broadway shows and stars of the day.  It has been a favorite among theatre lovers, as well as the Broadway stars themselves (Carol Channing, Angela Lansbury, Patti Lupone, Stephen Sondheim, Raul Esparza, Tyne Daly, Christine Ebersole, Bernadette Peters, Whoopi Goldberg, Mike Nichols, and Hal Prince, to name a few) who often stop by to laugh at themselves alongside the public.  FORBIDDEN BROADWAY has won numerous awards in its history including a Special Tony® Award as well as Drama Critics’ Circle, Obie, Drama Desk, Outer Critics Circle, Drama League, and Lucille Lortel Awards. Last season’s edition was named to Time Magazine’s 10 Best of the Year, and received a Drama Desk nomination for Best Musical Revue.  A theatrical institution, FORBIDDEN BROADWAY has received national and international notoriety having performed in over 200 US cities as well as engagements in Tokyo, Singapore, Sydney and London’s Menier Chocolate Factory.