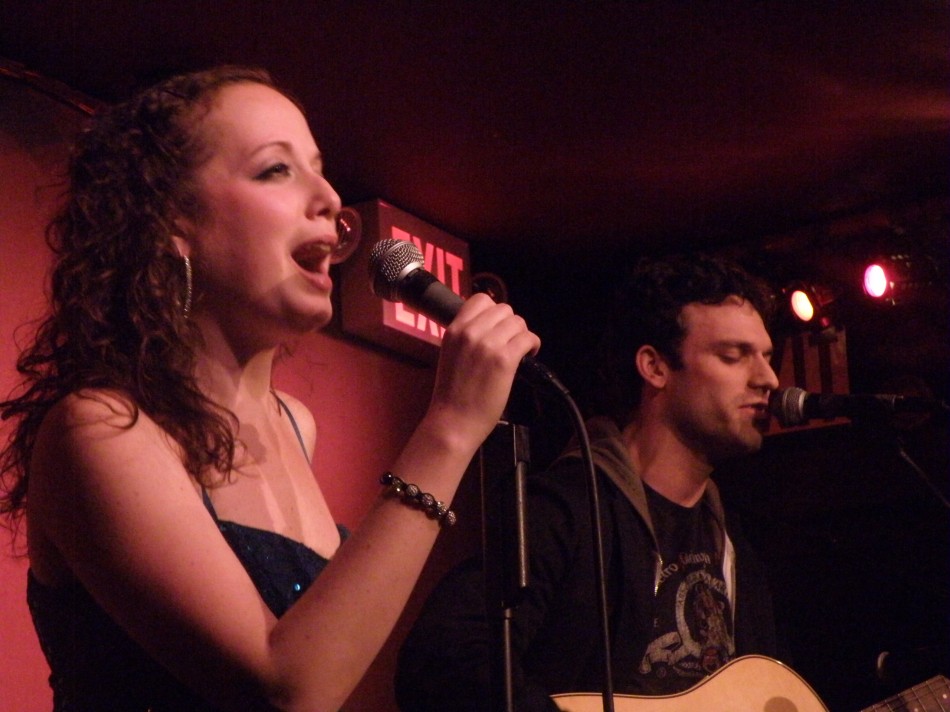 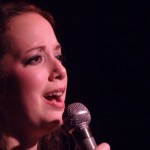 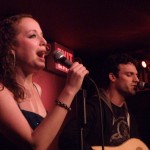 Gabi Epstein, one of Toronto’s busiest actress-singers, whose first NY cabaret show as my number one show that year, came back to New York this year because her young brother, Jake Epstein, late of “Spider Man Turn Off the Dark,” opened on Broadway in “Beautiful.”  After singing at several open mics in the city, Epstein ended her stay here at Don’t Tell Mama again with a special Canadian themed show entitled “Crack-aret,” a reference to Toronto’s notorious mayor.  On a very cold snowy night, Epstein certainly heated up the audience, opening with a rocking version of “Come Rain or Come Shine.”  Her superb musical director was Joshua Stephen Kates, an American Epstein found at the Laurie Beechman open mic “Broadway Swings.”

Immediately Epstein showed her Canadian pride by doing a major medley of songs by Canadian songwriters which the Canadians in the audience recognized.  I probably only recognized “A Case of You” and a Leonard Cohen song.  Plugging her album of the same title, Epstein ran the gamut with “I Won’t Show Off,” the song she did at Cast Party when the Tony Award winning Canadian composer Lisa Lambert showed up.

She told us how she had sent a video to Sydney Myer two years ago and had sang his request then, the obscure Gershwin “Ask Me Again.”  She found the song when Bob, a salesman at the lamented Colony Records made her a cassette tape of several songs including that Nancy LaMott one.  This night she performed on a spotlighted stool a beautiful forgotten song from “The Gay Life” entitled “Something You Never Had Before.” She joked that it was Joshua’s favorite show.  This number, as was the entire show, was superbly lighted by Jason Ellis, one of Don’t Tell Mama’s great staff.

An off beat number was her female version of Paul Simon’s “50 Ways to Leave Your Lover,” which she began very slowly and then on each chorus she accelerated her rhythm and volume until the last chorus was practically a tongue-twister.  Another very funny tongue twister was Canadian songwriter Zachary Florence’s “Subway Song” which had a recurring chorus of being stuck on a shut down subway train.  She related that they met in high school when he directed her in “Anyone Can Whistle,” introducing her to the world of Sondheim.

The highlight of the show was Jake Epstein with his guitar getting up on stage and recreating a family songfest with the great Beatles song, “With A Little Help of My Friends.”  Jake is very tall and handsome and Gabi is very short but their harmony and bonding was beautiful to hear and see.

There were more Canadian theatrical biographical stories, including a pairing with a woman who dressed as Liza for children shows and brought Gabi on to do Streisand, and experiences at Christmas pantomime shows, with the differences between the children‘s matinee lyrics and the adult versions done in the evening.  She also told of appearing in the role of Fanny Brice at a staged concert of “Funny Girl” last September with all the dialogue and the songs in a 1,000 seat auditorium and a full symphony orchestra behind her.

Gabi’s last number was a very slow “I Am Changing” that started softly, and built to a raging belt.  The crowd stood and her encore:  “My Man,” from the movie “Funny Girl,” was delivered with drama and passion.

Gabi Epstein is a major talent but she would be wise, for her next appearance, to edit the Canadian history.  A lot of the Canadian jokes went over the heads of the New Yorkers in the audience.