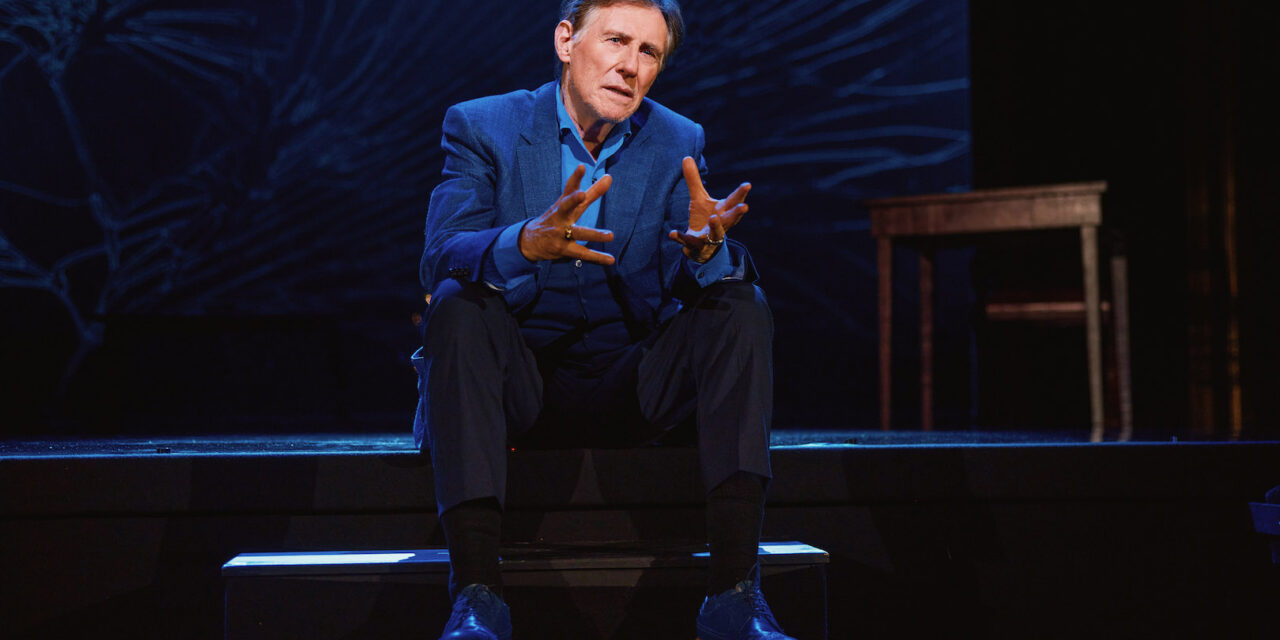 Sometimes when you walk into a theater for a show you know little to nothing about, you hope it’s going to be simple and straightforward, with no contrivances or excessive theatrics. That rarely happens on Broadway because producers want to deliver a “big show” with singing, dancing and special effects. But, once in a while, along comes a show like Gabriel Byrne’s Walking With Ghosts—playing now through December 30 at the Music Box Theatre—that is theatrical comfort food, delivering a pleasing evening of relaxed storytelling that leaves you more than satisfied and even a little thrilled as you exit the theater.

One-man shows are something of an anomaly on Broadway. But there have indeed been hugely popular, well-received productions that live on in Broadway history—recent examples include Mike Birbiglia’s long-form comedy performance in The New One (2018) or Alan Cumming’s one-man Macbeth (2013). What these shows have in common is the ability to captivate an audience and make them feel like they’re actually witnessing the events being described. Byrne, unassuming, placid and dressed (Joan O’Cleary) in a casual blue suit over a blue sweater-vest and a lighter blue button-up shirt, tells his stories—which are smartly divided into short “chapters” delineated by a fading to black at the end of each—casually and directly, as if you’re sitting with him at a bar, sharing stories over pints. What you’d never get from his tone is the severity of the tumultuous events of his life, many of which would permanently traumatize most of us. But Byrne, like many of his fellow storytelling countrymen, doesn’t whine about his fate—rather, these events are all portions of a rich tapestry of what he sees as a blessed and fortunate existence.

Raised in Dublin, the eldest of six children, Byrne tells us of a doting father and loving mother, who nonetheless complains that “ . . . the night you were born. You nearly killed me.” We see him taken to Catholic school and encountering an inebriated Brendan Behan stumbling onto the wrong bus yet being looked after by the community (including his mother), who lovingly forgive the great poet’s alcoholic meanderings. Thus we are shown both community life in Dublin and, later, in snatches, world events in 1950s Ireland: “The Russians are going to start a nuclear war,” a family friend, Mrs. Gordon, forebodes.

The 72-year-old Byrne, known for over 80 film and television roles (including a breakout performance in the Coen Brothers’ Miller’s Crossing) as well as Broadway, for which he has garnered two Tony nominations (both in Eugene O’Neill plays), nearly became a priest, spending five years in seminary. But that ended, as he recounts in one painful segment, not long after being sexually abused by a priest, his Latin instructor. Byrne tells the story matter-of-factly, not suggesting that it led to destructive problems later in life.

But one wonders, as Byrne later recounts tales of alcohol abuse and eventual recovery, how much these stories may be intertwined. Walking With Ghosts’ set (Sinéad McKenna) consists of a series of illuminated frames around a black background, backed by an image of shattered glass, onto which his shadow is occasionally projected . . . upside down—surely symbolizing disarray in an otherwise well put-together persona.

The tradition of storytelling in Irish (and even Irish American) culture has given us some of the world’s great yarn spinners. Large family gatherings consisting of boisterous talk, singing and, of course, the telling of tales, encourage and perpetuate what for many eventually becomes an art. The practice certainly has lent a hand in creating some of the greatest raconteurs the world has ever known. And Byrne most certainly continues that tradition. Under the direction of Lonny Price, his charm, wit and moderated passion allow us to richly live his personal history and feel a kinship we might not otherwise have had with this great writer, actor and director. Walking With Ghosts is a gift that shouldn’t be missed.

Walking With Ghosts. Through December 30 at the Music Box Theater (239 West 45th Street, between Broadway and Eighth Avenue). Two hours and fifteen minutes with one intermission.