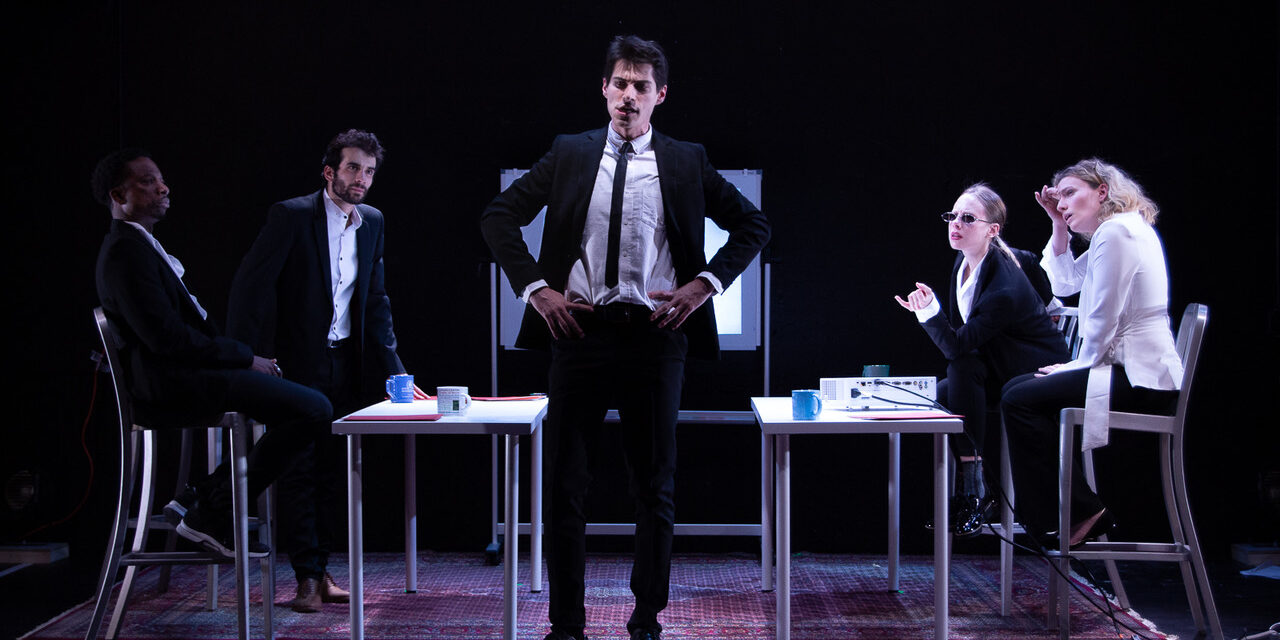 For film buffs, the name George Kaplan conjures up more than a few memorable images from Alfred Hitchcock’s 1959 suspense classic North by Northwest, the improbable and highly enjoyable tale of ad man Roger Thornhill (Cary Grant), who gets mistaken for a secret agent. Among other adventures, Thornhill goes up against a crop duster in a cornfield; outsmarts the villain, the smarmy Phillip Vandamm (James Mason), during a classy art house auction shouting out ridiculous bids; and climbs across the face of Mount Rushmore holding hands with the lovely Eve Kendall (Eva Marie Saint), with whom he’s fallen in love on his wild spy ride. The great fun is when, about an hour into the movie, it is revealed that George Kaplan doesn’t exist and that he’s been created by a branch of the U.S. government (unnamed in the film) as a decoy to make the enemy think he’s being closely watched.

That clever plot twist is the central metaphor of George Kaplan, by Frédéric Sonntag, which has been produced all over the world since its Danish premiere in 2013. Its first New York City production is being presented by the Bridge Production Group in a finely tuned translation by Samuel Buggein, at the New Ohio Theatre in the West Village. Its five-member cast, under the adept direction of Max Hunter, is having a field day with the play’s mix of political theater and absurdist comedy. The play provides ample food for thought, happily consumed prior to the upcoming Thanksgiving feast.

When, about forty minutes into the play, a character proclaims that no story should ever be told in three distinct parts—beginning, middle, and end—it foretells exactly what’s in store (“Never listen to Aristotle!” she cries). In a trio of non-related scenes, the actors all play different roles and, to the playwright’s credit, make it easy—establishing new identities efficiently. In the first play, all are called George and are part of an anti-social group mired in in-fighting over their manifesto. When first revealed, they are masked and filming a written proclamation being read in front of a video camera (two television sets broadcast their images and remain on stage throughout the play). Since the masks obscure their vision, the tape is aborted once they begin stumbling over the words. This is not a well-functioning group. They are the type that have to take a vote on whether to vote on something. Their dysfunction is manifested by their intention to sublimate their identities into one, as the non-existent George Kaplan. Sadly, these wannabe protesters are not cut out for their desired actions, with their petty grievances overwhelming their noble intentions.

The tone in the first scene brought to mind Luigi Pirandello’s Six Characters in Search of an Author, though it’s more like Five Characters in Search of a Subject. They cannot come together on whether George Kaplan is representative of an operation, a concept, a myth, a weapon or merely a hoax. The only thing they can agree on is the need for a phantom identity, with the ultimate goal of having George Kaplan wreak havoc on every database in the world. “We’ll be many, and we’ll be single, the being with no face, anonymous in the crowd. We’ll be that person whose name is everywhere and body nowhere. That ghost which, one by one, each of us will become and through which we will manufacture our own disappearance: that person is George Kaplan. We invite you to join us. To become George Kaplan.”

The second scene finds the five actors now as five writers in a writer’s room—a scenario we’ve seen depicted many times in theater, most hilariously in The Antipodes, Annie Baker’s 2017 play set entirely in a writer’s room. These new five characters have a different mission than the prior group: George Kaplan is the phantom subject upon which these writers have been hired to fashion a scenario—in fact, paid to do so, unlike the dreamers in the first play. Someone even carelessly pitches the storyline of North by Northwest. Also, their benefactor remains anonymous (another George Kaplan) and soon the play descends into real-life violence, something the first play barely hinted at. It’s completely purposeful that in this play, in which characters are creating art, a gunman is revealed; whereas in the play, about overthrowing the government there is not a gunman.

The third play involves government officials overseeing a hostage situation of their own making (again on those TV sets) and coming up with their idea of creating a George Kaplan to take the heat off them. North by Northwest is again introduced when one character offers the conspiracy theory that Alfred Hitchcock is actually behind everything. Just forget the fact he’s been dead for more than forty years.

The play cleverly concerns itself with the need to create something that doesn’t exist out of a need to control. It’s a fascinating subject, and though the play feels a bit long at under ninety minutes, it holds one’s interest throughout. That is largely due to an excellent cast who all deserve praise: Christina Toth, Max Samuels, Elisha Lawson, Campbell Symes and Michael DeFilippis. Credit again to Max Hunter’s direction which enables these actors to work so well as an ensemble. The set by Thomas Jenkeleit is minimalistic and serves the piece well, and the costumes by Avery Reed felt right. However, Connor Mulligan’s lighting design was patchy, and the use of fluorescents did nothing to aid the look of the play.

Upon close inspection of the George Kaplan program, the name Dante de Blasio credited as Assistant Director and Dramaturg stirred my interest and added an interesting wrinkle to the production overall. Yes, he is the son of former New York City Mayor, Bill de Blasio!  The young Mr. de Blasio attended Brooklyn Tech and graduated from Yale in 2019.

For a diversion with emphasis on the surreal and a love of language, George Kaplan makes for a tantalizing journey into finding out (as the play states) whether “we are all George and George is all of us.”