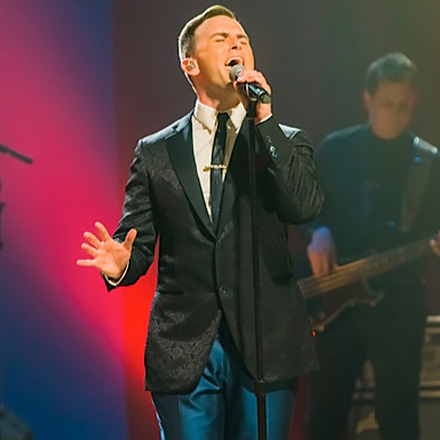 Getting to Know Them! Daniel Reichard Celebrates Rodgers and Hammerstein

At the Feb. 5 performance of Daniel Reichard’s show celebrating Rodgers and Hammerstein, Reichard told his audience at Feinstein’s/54 Below that his sister Libby was “the reason we’re all here tonight.” Turns out Reichard is the eighth of nine siblings, and Libby was the one who introduced him to musical theater. It was not long before the audience realized we all owe Libby a great big thank-you.

Although the show aimed to celebrate the Rodgers/Hammerstein collaboration, Reichard devoted a portion of the evening to songs the composer and lyricist wrote with other partners: “All the Things You Are,” by Hammerstein and Kern, and “Johnny One Note” and “Where or When” by Rodgers and Hart. This provided context for youngsters who might otherwise wonder at the maturity of even their earliest work.

Then came that glorious first Rodgers and Hammerstein song, the opening number of Oklahoma, “Oh What a Beautiful Morning,” and we were off.

Reichard’s enthusiasm and love for these songs is only matched by the power and range of his voice. What’s more, his arranger, Jesse Vargas, has provided some original interpretations for classics, giving “The Sound of Music” a jazzy feel that morphs into a ballad and then back into swing, and coloring “All the Things You Are” with a Latin beat. But fortunately, Vargas and Reichard know when not to disturb perfection; “Some Enchanted Evening” and “You’ll Never Walk Alone” were given a traditional, and quite moving treatment.

Special guest Larisa Martinez brought the evening to a high point with “Climb Every Mountain,” and an instrumental interpretation of “Bali H’ai” provided a thoughtful space in the show.

Reichard pointed out that one of Rodgers and Hammerstein’s innovations was to make musical comedy more dramatic and significant. With “You’ve Got to Be Carefully Taught” and “We Kiss in the Shadow,” he reminded the audience that their condemnation of racism was way ahead of their times.

Towards the end of the evening, Reichard remarked, with considerable amazement, that the songs of Rodgers and Hammerstein were the popular music of the 50s, the music people danced to. This is not quite true. People did not dance to the music of Rodgers and Hammerstein. They listened. Which was exactly what the audience did at Feinstein’s/54 Below. And they did so with enthusiasm and joy.