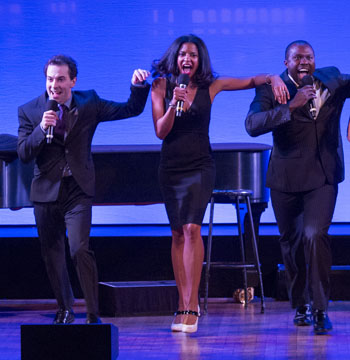 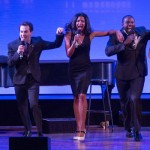 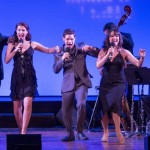 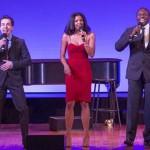 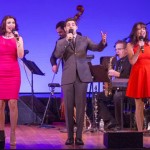 What could be better than a show filled with numbers from the Golden Age of MGM musicals helmed by Arthur Freed? One whose illuminating, witty Host, Writer, Director, and Choreographer is three time Tony winner Kathleen Marshall; whose Music Director and Pianist is the terrific David Chase; whose band is first rate; and whose vocalists are polished, young talents. A $125.00 Broadway ticket? No. The first Lyrics & Lyricists program of 2014.

A medley by Arthur Freed and Nacio Herb Brown sets the celebratory opening tone. “As we know, MGM Musicals are all about real life,” Marshall begins smiling. Where and when else did the ordinary tale become (musically) extraordinary on a daily basis? Freed produced “Babes in Arms, ushering in the let’s put on a show musicals; brought Vincente Minnelli, Betty Comden & Adolph Green, and Kay Thompson from Broadway; ran out of 13 year old Judy Garland ‘s audition to alert Mr. Mayer; was pivotal in the careers of Gene Kelly, Frank Sinatra, Lena Horne, and Cyd Charisse; brought Fred Astaire out of retirement back to MGM…and on and on. Remember Meet Me in St. Louis, On the Town, Easter Parade, Gigi, The Band Wagon, An American in Paris, Singin;’ in the Rain…?! He discovered and nurtured some of our best performers, directors, writers, and choreographers with a vocabulary Leslie Caron described as including four words: “yup,” “nah,” “terrific,” and “terrible.”

We start with three Garland tunes including a bubbly rendition of “The Trolley Song” performed by a fresh and wholesome Cameron Adams. Capturing just the right wistful innocence, the performer later offers a lilting “The Boy Next-Door” and pairs with Rob McClure on two song and dance numbers. “You Wonderful You” has ease and charm while the beautifully staged “A Couple of Swells” for which McClure actually wears Fred Astaire’s battered hat (a gift to Marshall from her husband) emerges as a stylish romp.

Rob McClure, whom I found entirely captivating in Chaplin, offers an insouciant, tipped-fedora interpretation of “Steppin’ Out With My Baby” and a version of “How About You” in which he conjures dancing before getting to his feet. As a vocalist, he’s sincere and economic, expressing rather than mugging. Partnering with Adams, he contributes to graceful symbiosis; a lightness of foot and spirit of which we see too little today.

Renee Elise Goldsberry’s “Somewhere Over the Rainbow” is simply gorgeous. Elegant without being stiff, the vocalist imbues her song with warmth and airborne yearning. A slight, controlled vibrato enhances listening pleasure. Similar quality is showcased with edge in the well phrased “Happiness Is Just a Thing Called Joe.” Only a jazzy, percussive rendition of “Just One of Those Things” feels out of cinematic place.

Joshua Henry performs a slow, besotted “All of You” and “The Last Time I Saw Paris,” the first Hammerstein/Kern collaboration not written for a show. This breezy version gets too big for its poignant lyric. “I Guess I’ll Have to Change My Plan” feels a bit heavy but “Sobbin’ Women” utilizes this same warm baritone with appropriate hoe-down accent and robust delivery.

Rachel York has the presence and approach of a nightclub chanteuse. She appears less invested in lyrics than in music. Despite excellent vocals, I buy neither “Better Luck Next Time” or “Get Happy.” For a rendition of “Thanks A Lot, But No Thanks” York loosens up, employing hips, attitude and intonation slightly colored by Mae West. This is saucy fun.

Jeremy Jordan, late of Newsies, sings a bright, jaunty “Shine On Your Shoes,” and croons a lovely “Gigi aided by Brian Pareschi’s nuanced horn playing. (Jordan is a crooner.) “Our Love is Here to Stay” is directed (mostly) at Adams with great warmth. The talented artist fares less well with the comic “You’re Awful” from On the Town. Phrasing is good but irony is missing.

Group numbers include a fine arrangement of “On the Atchenson, Topeka, and The Santa Fe,” well staged and performed with gusto, and a grand finale of “Singin’ in the Rain” replete with umbrellas and a projected shower. Pacing is smooth and tight. Gestures are kept to a minimum, staging is aesthetically pleasing, choreography is winning, musicianship formidable. One can only hope Ms.Marshall offers another program in the next series. Serious entertainment bang for your buck.