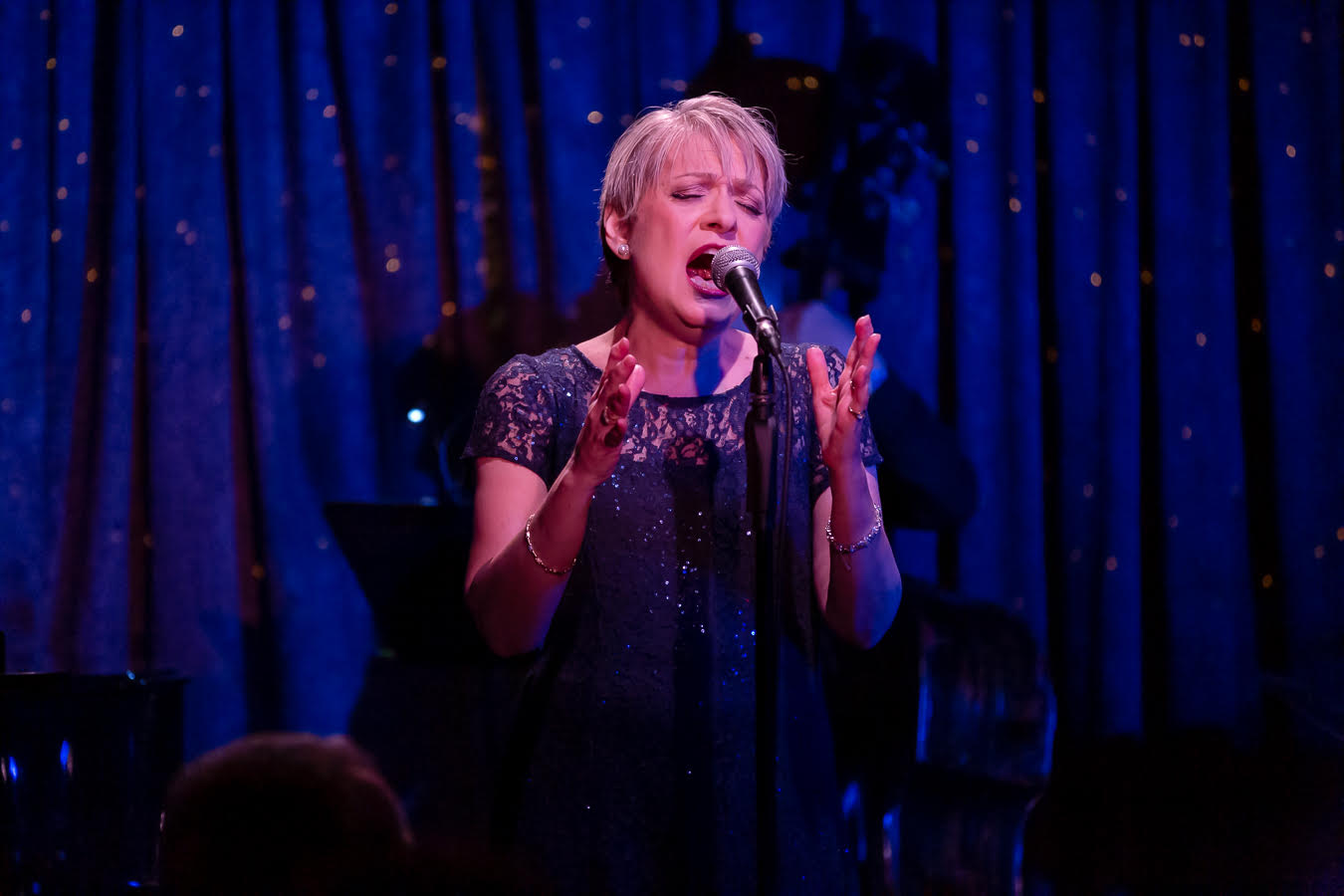 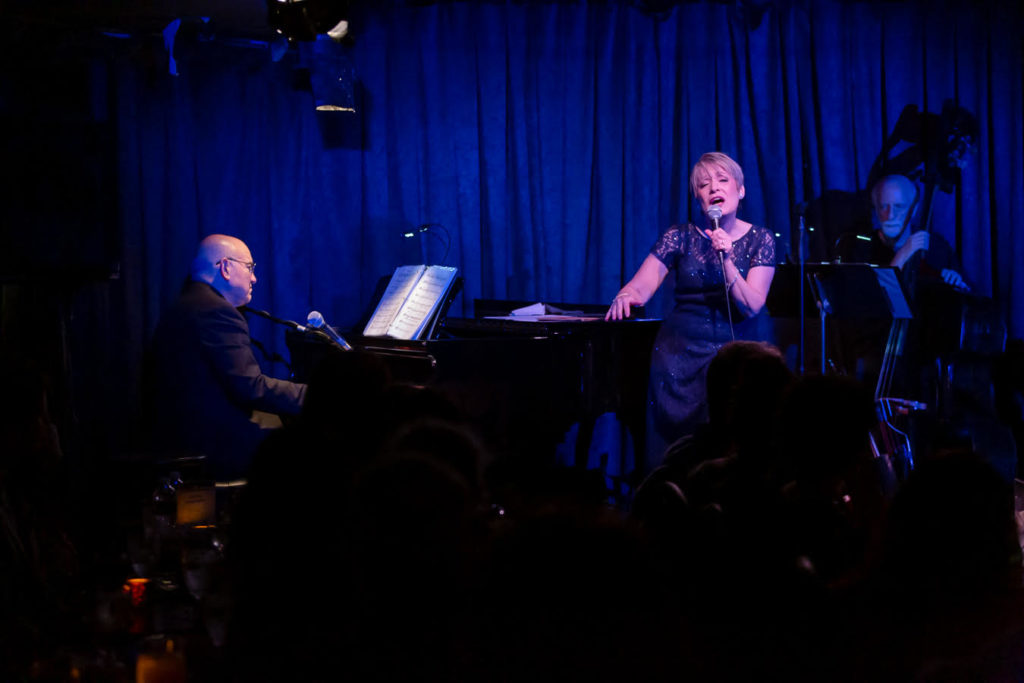 Goldie Dver has an abundance of attributes that are, even individually, prerequisites for stardom. She’s talented, flexible, endearing, passionate, resourceful, honest, collaborative, sexy and unselfconscious. She also looks very much at home on stage. In addition, she’s smart and has an uncanny appreciation for lesser-known songs which she delivers so they earn their creators the approbation and respect they deserve.

Goldie brought all her virtues to the fore in an exciting, versatile, multifaceted 90-minute songfest, which demonstrated why critics have lauded her as one of New York’s most exciting vocalists and won her a MAC Award for Crazy World: Songs of Leslie Bricusse, staged .by James Beamon, the accomplished director of her equally engaging current offering, Back in Mama’s Arms.

Goldie’s absence from the cabaret world is easily explained. “For many years my life was happily moving along as I’d planned, personally and professionally, until God threw me a series of life-shaking curves. The most devastating was the death of my husband Paul from a sudden heart attack last summer.” Rather than wallow in maudlin sentimentality, Goldie’s memories of Paul are true and touching. When she speaks about the 41 years she and Paul were together, the audience applauds. “I’ll take that applause,” she responds and adds, “You knew Paul too.” 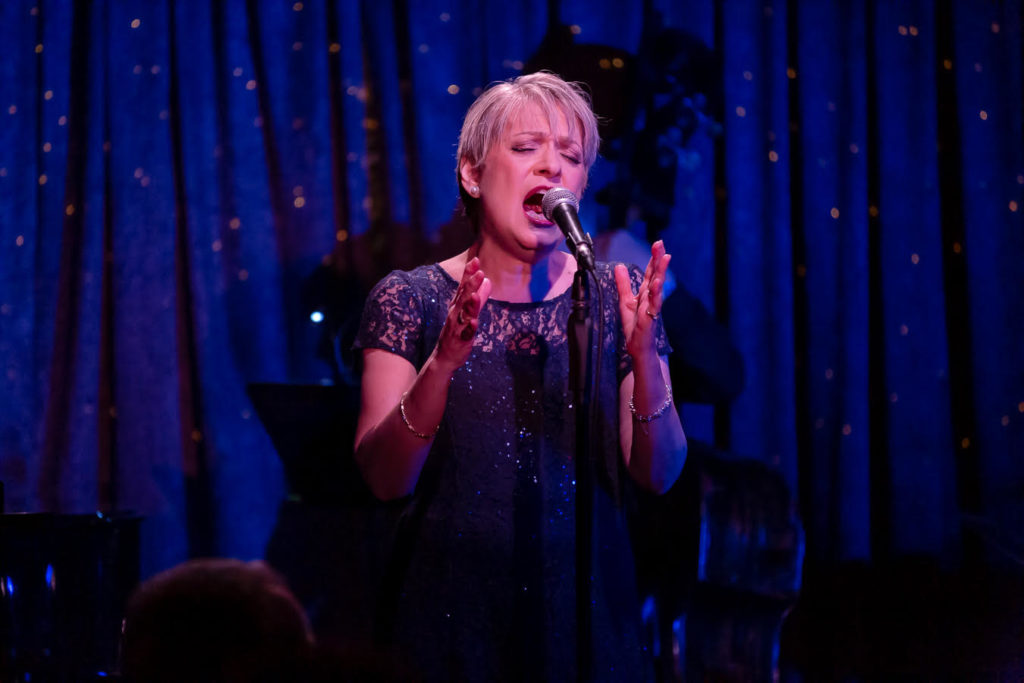 Despite her traumatic loss, Goldie has returned to her passion; singing. It’s brought joy to her soul and allows her to share the realization that while pain and loss are part of life, life also supplies ways to heal, more forward and pursue happiness. Very blonde and glamorous in a sparkling black lace sheath, Goldie opens her show with “Self Portrait,” by under appreciated composer but appreciated A Chorus Line lyricist Edward Kleban, letting us see the face behind the face behind the face, then celebrates life with Maltby and Shire’s “Today Is The First Day of the Rest of My Life” and Jerry Herman’s “It’s Today!,” which leads to a sophisticated evening of heart and humanity, into which Goldie, James Beamon and Music Director Bill Zeffiro have lovingly woven 22 gems from a full range of musical genres written by Sondheim, Matlby and Shire, Newley and Bricusse, Johnny Mandel, Alan and Marilyn Bergman, Joni Mitchell and Brian Lasser plus two original, very personal gems, Paul Dver’s ”Someone” and Bill Zeffiro’s “I’ve Still Got New York,” which were among the evening’s highpoints.

Goldie reveals that by the time she was 12, her way with words and music attracted a producer who arranged for her to record “The Impossible Dream,” on a 45-rpm disc. She held it up to prove its existence, sang the first bars as a duet with her pre-teen self before ending solo in the present, backed by her excellent trio – Music Director Bill Zeffiro on piano, John Miller on Bass and Grant MacAvoy on Drums.

She met Paul Dver after she moved to New York. Their initial encounter was hardly propitious. She’d been told by their mutual friend Mark that she should meet the very talented Paul. She assumed, because all the talented men she’d met in New York were gay, that Paul also was. He assumed that she was Mark’s girlfriend, was off-limits to him and ignored her. While deterred by Paul’s rudeness and disinterest, she immediately realized that “no self-respecting gay man would go out in public looking like he did.” 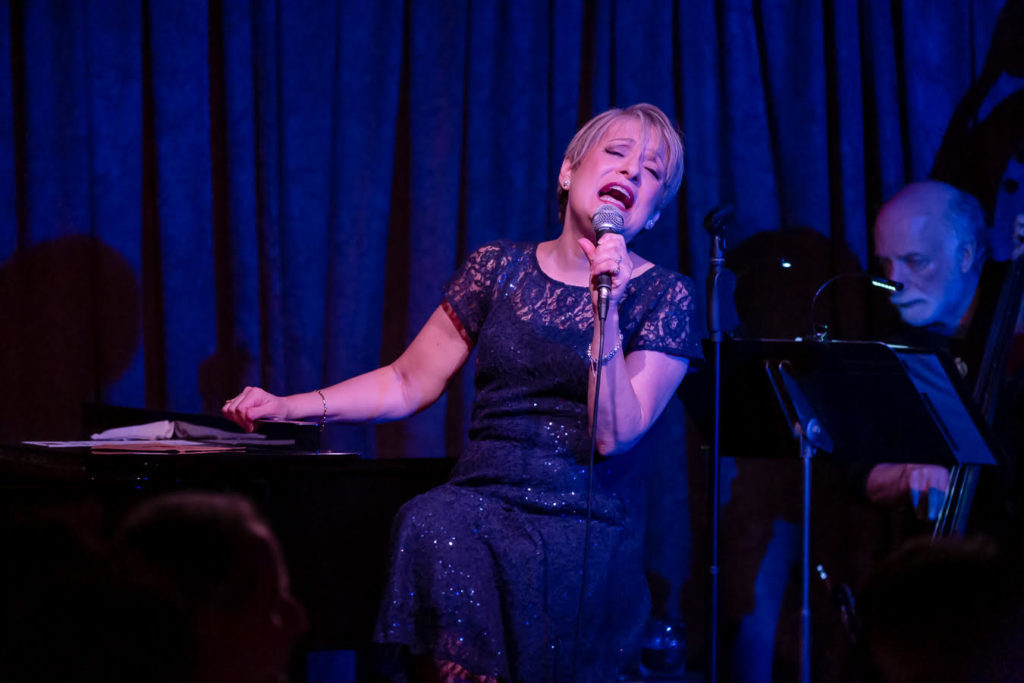 Things changed when she heard his “Someone,” a lush melody with tender lyrics that impressed her with his talent and sensitivity

and he became aware that she was not romantically involved with his friend. And that was that. Goldie’s “Someone,” sung with great tenderness was followed by the down to earth warmth of Brian Lasser’s “Just to Look at Him,” created a very compelling moment.

Goldie milks every ounce of emotion from ballads but her versatility rises considerably beyond that. She has a big voice and can belt out a song that deserves it. Her wicked sense of humor is evident in an outstanding New York medley – Kander and Ebb’s “Class,” LCD Soundsystem’s “New York, I Love You, but You’re Bringing Me Down,” Joni Mitchell’s “Big Yellow Taxi” and Stephen Sondheim’s “Another Hundred People” which was topped by Bill Zeffiro’s “I’ve Still Got New York,” a witty ditty whose clever lyrics:

So the Oak Room’s gone for good, and round the neighborhood
The joints are closed, but Disney never goes away
But friends I have no doubt, The Mouse, and Mamma Mia will move out

deserves to be chanted on every corner of today’s New York.

Goldie concluded with Johnny Mandel and Alan and Marilyn Bergman’s “Where Do You Start,” and Anthony Newley and Leslie Bricusse’s “Sweet Beginnings.” The audience responded to her encore – Artie Butler and Phyllis Molinary’s “Here’s to Life,” with wild applause.

Three cheers and several bravos for Goldie, James Beaman and Bill Zeffiro. So looking forward to seeing them all together again. .