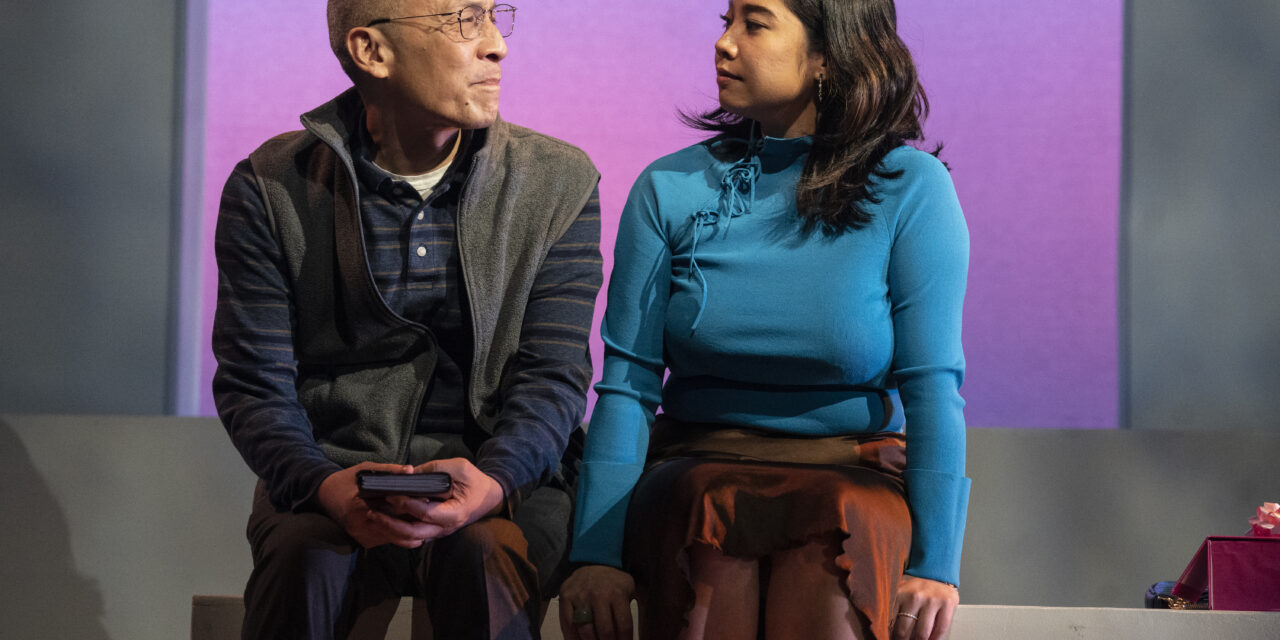 Slick and convincing, Good Enemy is more weighty than humorous, only sometimes erupting in a type of violence that is unfathomable.

Driving the action is a humble, often affable, Asian parent named Howard.  Francis Jue battles the past and the present.  Caught in reverie in a post-pandemic time, his world is particularly contemplative.  His voice and manner are so agreeable, yet the situations that he finds himself in are sometimes too much for words.  He travels to speak with his college-age daughter who has posted images of herself almost clothed on TikTok.

In Good Enemy, Audible Theater Emerging Playwright Yilong Liu questions love and the nature of finding agreement.  Will love win with the younger characters, or will they revert to the necessity of colonization, always finding the enemy around the next corner?  Looking back at life in China, we find a militant state where reporting one’s own is steeped with consequence.  Must a good enemy be a member of the opposite sex?  The production moves backwards and forwards, and, as it does, there is a confusing sense about it.  Driving action connects with a fury that is built over time.  The violence is sometimes startling.  When a gun is pulled in a car scene, there is no relief.

Time skips around, and the characters talk through their problems, freely confronting the health drama of today.  The pandemic of 2020 seems to have inspired fear.  Asians may have felt particularly at risk, as intercontinental health mandates became more confusing than comforting.  Some of this may have unconsciously driven Audible Emerging Playwright Yilong Liu whose observations are layered with a disquieting type of uncertainty.  Though the playwright’s storytelling is choppy, the production has tremendous pulses of energy.

Meanwhile, theatrical techniques embraced by Director Chay Yew dazzle.  There is a beautiful pond in the center of the stage.  Without fear, the young man encounters a young female character.  In a type of abandon, there is a much sought-after escape.  The young man is asked to report this episode later in a type of military drama that verges on the deplorable.  There’s a type of paranoid anger that propels him, creating an intense understanding of how we choose to view one another.

Love matters, peace matters, and age makes a profound difference.  As we watch the young and old battle, there is a sense of distance without understanding.  When authority breathes down one’s throat, it leaves an individual with difficult choices to make.  This sink or swim culture, inspired by a post-pandemic uncertainty, asks us to question survival of the fittest.  There’s time to get past it all, but what if none of it builds bridges to the future?

Good Enemy is playing at the Minetta Lane Theatre, located at 18 Minetta Lane, between MacDougal & 6th Avenue, one block south of W. 3rd Street in NYC. thru Nov. 27. www.goodenemyplay.com