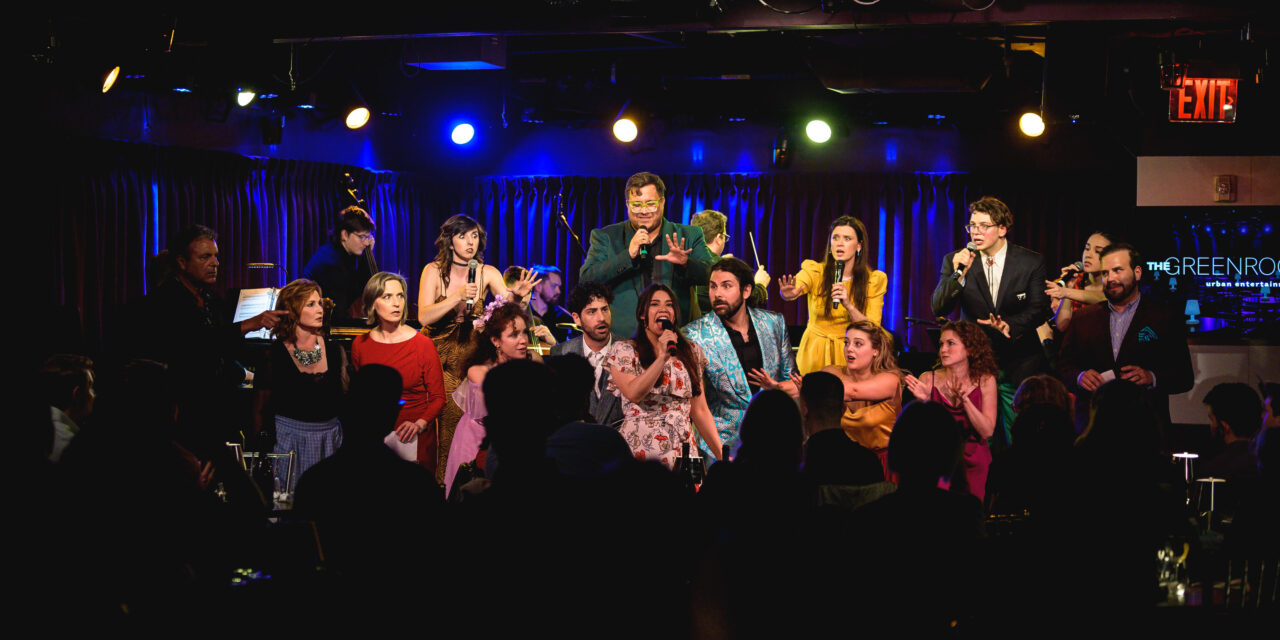 One upon a time, there was a rather whimsical Broadway musical that intertwined the plots of several Brothers Grimm fairy tales, with characters taken from “Little Red Riding Hood,” “Jack and the Beanstalk,” “Rapunzel” and “Cinderella,” as well as several others. That musical, of course, was Into the Woods, a Tony Award-winning Broadway show from 1987 with music and lyrics by the late Stephen Sondheim, with a book by James Lapine.  The musical is tied together by a story involving a childless baker and his wife, and a witch who has placed a curse on them.

If you’ve ever seen the “stateroom” scene in The Marx Brothers’ A Night at The Opera, you’ll recall some 15 characters and a steamer trunk crammed into a tiny cabin.  At GR42 Sings Into the Woods, an 11-piece orchestra and much of a 16-person cast were crammed onto the modest Green Room 42 stage, with the other actors in full view all the way to the door.  The performance was a musical staging of the complete show, with dialogue, creative pseudo costuming and whimsical props.  The action was moved along with the use of clever narrative devices by producer/director Quentin Garzón that amounted to a “yada-yada” fast-forward button.

GR42 Sings Into the Woods is the brainchild of Mr. Quentin Garzón, who managed to pull together a tremendously talented cast of musical theater performers, including several veterans of Sondheim’s Broadway productions, notably Ramona Mallory (Anne in the revival of A Little Night Music) as the Baker’s Wife, and Sarah Rice (the original Johanna in Sweeney Todd) in the small role of Cinderella’s Mother, with the backing of a compact, Broadway-quality orchestra.

Garzón wondered if there might be anyone in the audience who could tell the story of Into the Woods.  Many hands in the audience of largely musical theater devotees were raised, but there was a plant, the tousle-haired Jacob S. Loucheim, a ringer for a young Robert Downey Jr., who proved to be the narrator of the evening, who pulled everything together.

In an evening of far too many fine performances to discuss, several performers deserve special mention.  Ramona Mallory, with her stunning voice and playful acting, was a delight as the Baker’s Wife, her singing flawless, both solo and with other characters in songs like “Moments in the Woods” and “No One is Alone.”  Angeline Mirenda was brilliant as the Witch.  Even without makeup, bent over and wearing a ratty coat as a costume with a staff crafted from a cello scroll and pegbox, she evoked a witch, and was terrific on the mother-daughter duet of “Stay With Me” with the lovely and talented Rebbekah Vega-Romero as Rapunzel.

Quentin Garzón played dual roles as the Wolf and Cinderella’s Prince.  As the Wolf, wearing a long leather coat and his hair down, Garzón resembled Neo from The Matrix if he were played by Dave Grohl.  He was a bit of a ham, chewing up the imaginary scenery.  As Prince, wearing a snazzy blue dinner jacket, he was charming, winning himself a kissing scene with the Baker’s Wife.  His duet on “Agony” with Rodrigo Ignacio Cruz as Rapunzel’s Prince was powerful.

The uber-talented Pablo Rossil, who recently produced and scored the band’s charts for his Swingin’ with the Music of Stephen Sondheim show at 54 Below, brings a large and delightful presence whenever he appears.  His singing is first-rate.  Noel Houle-von Behren, as Jack (of “Beanstalk” fame) had a beautiful solo turn on “I Guess This is Goodbye.”

A confession:  This reviewer has never seen Into the Woods, or any solo Sondheim show aside from Company,on Broadway or film.  As such, I missed a fair number of references and “Easter eggs” that the audience ate up.

A few performances were marred by sound challenges at The Green Room 42, including a dead mic and several hot ones that caused some voices, like that of Metropolitan Opera star Melanie Sierra, as Cinderella, to sound strident.  Some of these challenges can be attributed to the sheer size and complexity of staging a show like this with so many voices and mics that it would take a full sound team and sound choreography to ensure the correct levels for each singer.  Still, this was a tremendously fun way to present the essence of a show like Into the Woods.  Kudos all around to Mr. Garzón, the performers and the team that managed to put together such a colossal undertaking in a somewhat intimate cabaret space.

Produced and directed by Quentin Garzón