Spectators looked on as the Artistic Team at MCC put a sledgehammer through the wall, at the groundbreaking for the new space at Avalon Clinton Complex (52nd Street/10th Avenue) on Tuesday, March 22. 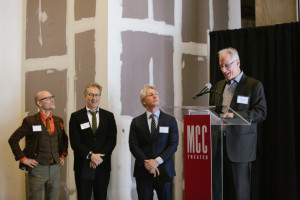 MCC creative team welcomed architects, artists, Department of Cultural Affairs, and Department of Design and Construction as they announced their new space at 515 W. 52nd Street. Designs on easels depicted the change in rehearsal and performance space for this 30 year company.

MCC produces full-length works, a PlayLab series, and youth and community programs. The Artistic Team said that Architect Andrew Berman “had this vision (worked with ours) to turn this raw space, into what is going to be an incredible incubator, a hub, to help us broaden and grow everything we do.”

The new space has two theaters – a 249 seat and 99 seat theater – two rehearsal and studio spaces, and a lobby. There will also be a bar area, overlooking a courtyard. The artistic leaderships said that the actors and authors, students and staff, will be able to share the space. The new “theater home” will offer six productions, including musicals. MCC will also continue with their afterschool youth program. 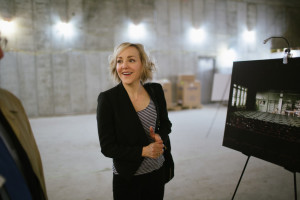 Artists spoke about their vision, and their desire to continue working with the team at MCC. Actor Zachary Quinto (Smokefall, revival of The Glass Menagerie on Broadway), said that he always wanted to work at MCC. He said that the Artistic Team at MCC was able to “create and sustain -in this environment – a company that has a foundation of connection and truth and collaboration in a way that I have really never seen come together.”