H.M.S. Pinafore – Set Sail on a Sea of Mirth 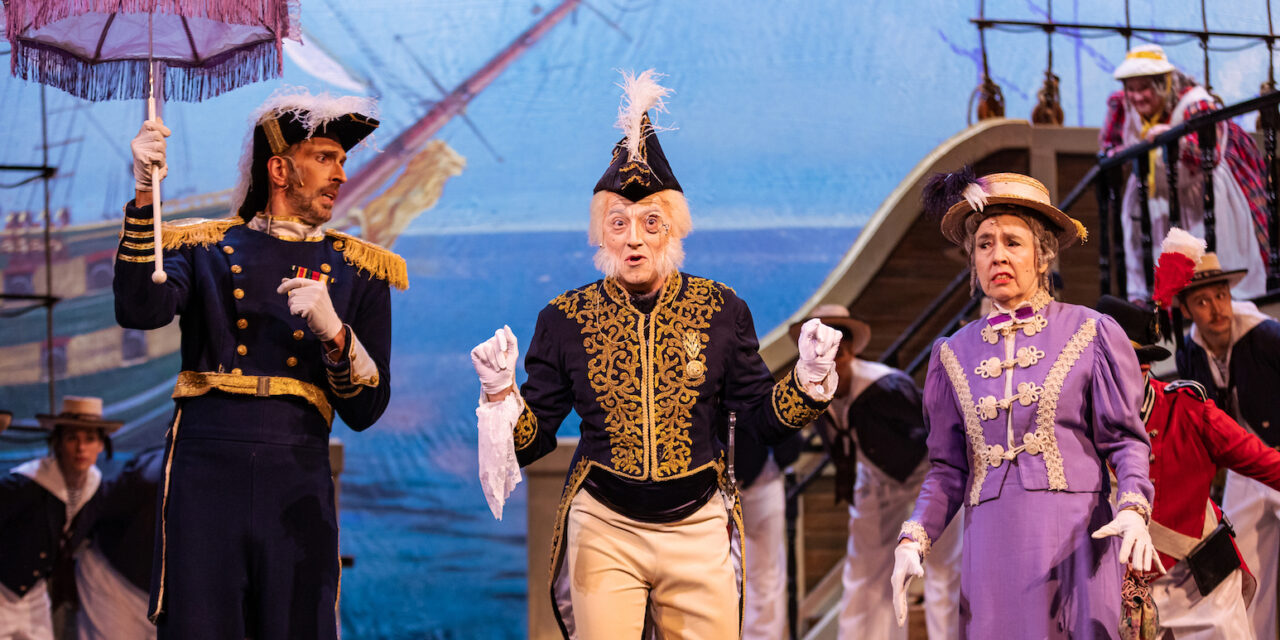 Gilbert and Sullivan’s comic opera H.M.S. Pinafore debuted in 1878 during England’s Victorian era. One could choose to study the decline of the empire since that debut—or simply be entertained by the great songs and comic plot twists it offers. I chose the latter, aboard the New York Gilbert and Sullivan’s Players’ (NYGASP) new production at The Kaye Playhouse at Hunter College. I was not disappointed.

H.M.S. Pinafore was Gilbert and Sullivan’s first international success, satirizing British society, class distinction, fabled institutions like the British Navy and the fervent reverence of the “Englishman” (I assume those men had mothers, but not to quibble . . . ). So, when Gilbert and Sullivan began their successful career they did well to select characters and themes dear to the British. For all the opera’s silliness, much appreciated and deftly performed, British patriotism is on full display: “But in spite of all temptations/ To belong to other nations,/He remains an Englishman!” Yes they are silly sods but they’re our silly sods! Aye. Aye!

All action appears on the quarter deck of the Royal Navy ship—the titular “H.M.S. Pinafore,” naturally—that easily accommodates the singing and dancing cast and ensemble’s multiple exits and entrances (Scenic Design by Albère). The plot centers on the onboard arrival of Sir Joseph, the first Lord of the Admiralty, who expects to marry the daughter of the ship’s Captain. However, the daughter, Josephine, has fallen in love with a “lowly” crew member, a tar named Ralph Rackstraw. Of course, their marriage is not going to happen due to their mismatched social “levels.” She is the daughter of a ship’s Captain, he is a mere sailor. Arrrrgh, British social conventions!

The play continues to examine this conundrum and envelops other characters’ longings until an inevitable solution is found. Along the way, the only acceptable reaction to the silliness of adhering to social constructs that prevent love from blooming is for the characters to act out with a torrent of wordplay, slapstick and general merriment until all is well aboard this ship of fools.

As Gilbert and Sullivan’s first international success, H.M.S. Pinafore premiers many of the classic G&S plot devices. Someone is always falling in love with someone out of their class; lead characters tend not to be who they actually are; babies are switched at birth; characters are in disguise; and British social conventions make for strange bedfellows. All of these tropes are later employed in other Gilbert and Sullivan operas—notably The Mikado, The Gondoliers and The Pirates of Penzance.

The production (smartly directed by Albert Bergeret) recognizes that the play takes place during an era no longer relevant, when Britannia ruled the world and the seven seas. The world has since moved on. Smartly, the direction intersperses contemporary cultural references to acknowledge this passing and, in the spirit of the play—a sly nod and wink—says yes, these are olden times, but we can still have fun with these arcane ideas. References made include COVID tests, attending New Year’s Eve in Times Square and the correct pronunciation of the letter “H,” as in “Hogwarts.” There are countless others throughout, so pay attention, if you please. Again, an exaggerated nod and wink will proceed their arrival.

One of the benefits of attending a well-known Gilbert and Sullivan work— especially one so celebrated as H.M.S. Pinafore—is anticipating a fun and entertaining performance. This production certainly met and exceeded that expectation. The entire ensemble are in fine voice and step, on par with previous NYGASP productions. The leads were terrific: David Auxier as Captain Corcoran; Michelle Seipel as Josephine; James Mills as Sir Joseph; Cameron Smith as Ralph Rackstraw; Angela Christine Smith as Little Buttercup (Mrs. Cripps); Lance Olds as Deadeye Dick; Michael Connolly as Sergeant of Marines; and Victoria Devany as Cousin Hebe—one and all were superb! For me, the show’s highlight was the performances of Sir Joseph, Josephine, and the Captain, a trio with brio, including their jaunty give-and-take with the orchestra that thoroughly captured the essence of Gilbert and Sullivan’s mirth. Bravo!

The H.M.S Pinafore will be docked in New York for one more weekend. See it, if you please.

H.M.S. Pinafore. Remaining New York shows: Saturday, January 7 at 2:00 PM and 7:30 PM; and Sunday, January 8 at 3:00 PM at the Kaye Playhouse at Hunter College (East 68th Street between Park & Lexington Avenues). The production will continue on a national tour following the New York performances. Consult www.nygasp.com for cities and dates.