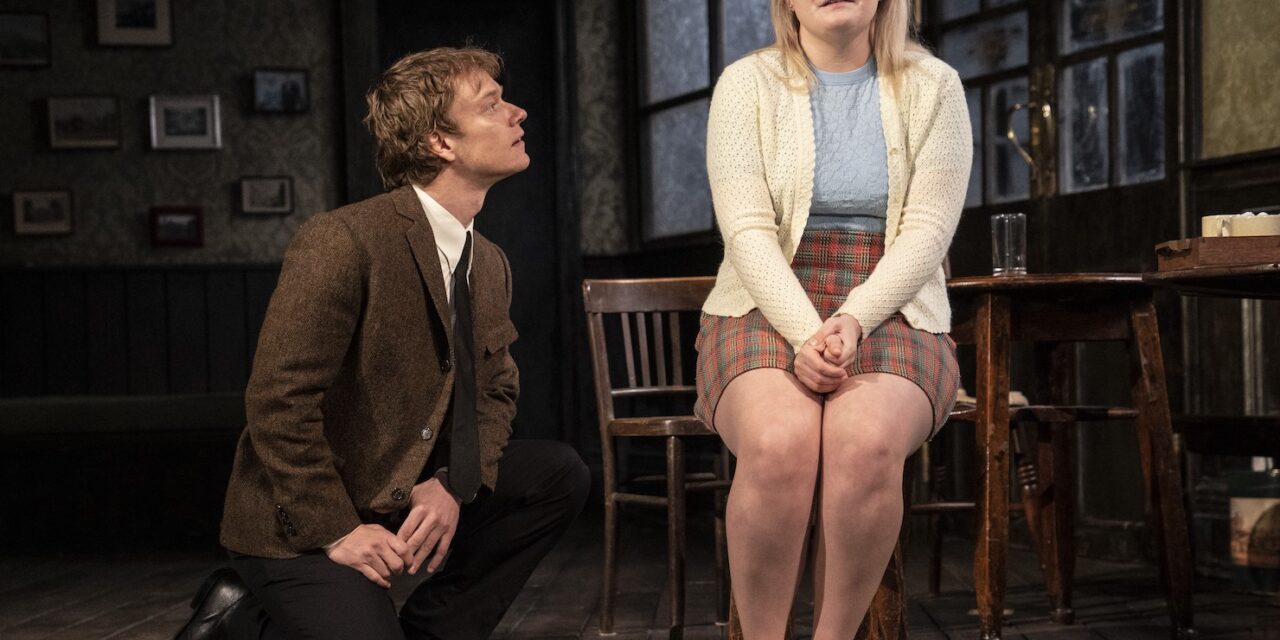 When it comes to sucking you into the vortex of a funny, violence-steeped dramatic world, few playwrights can do it with quite the mesmerizing theatrical panache of Anglo-Irish playwright Martin McDonagh (The Pillowman). Give him a gifted director, ensemble, and design team, as in the current Broadway revival of Hangmen at the John Golden Theatre, and he’ll demonstrate as few others can how to make a play turn on a dime from menacing to hilarious and back again.

Originally staged in 2015 at London’s Royal Court Theatre, this exemplar of gallows humor moved to the West End, where it was a 2015-2016 hit; transferred to Off-Broadway’s Atlantic Theater Company in 2018; and was set to open on Broadway in 2020 when Covid struck, forcing it to wait till now before reaching Broadway. Many cast changes have taken place, and only Andy Nyman as Syd, Ryan Pope as Charlie, and John Hodgkinson as Pierrepont remain from the original production.

Each of the replacements, however, is thoroughly up to the task, especially Alfie Allen (Theon Greyjoy on “Game of Thrones”) as Mooney, Tracie Bennett (Judy Garland in End of the Rainbow) as Alice Wade, David Threlfall (Smike in Nicholas Nickleby) as Harry Wade, and Gaby French as Shirley, which she played Off-Broadway.

Anna Fleischle repeats her period-perfect set and costume designs, Joshua Carr again does the brilliant lighting, Ian Dickinson repeats his exciting sound score, and Matthew Dunster once more directs with brilliance. (Some of what follows is adapted from my review of the Off-Broadway version for “The Broadway Blog.”)

The noose begins tightening from the second the lights rise on the grim, brick walls of an English prison’s execution chamber, sometime in 1963. Within minutes, we witness a struggling young prisoner, Hennessy (Josh Goulding), protesting his innocence, hanged (not “hung” as a misinformed character is instructed) with as much compassionless efficiency as you’d show when squashing a cockroach. Overseeing the execution, while ridiculing his subordinates, is the stout, blustery, self-important hangman, Harry Wade.

Then, in one of Fleischle’s scenic coups, the set flies upward to reveal the expansive interior of a large pub, two years later, in Oldham, Lancashire, in Northwest England. Harry, forced to retire in the wake of capital punishment’s recently being abolished in the UK, owns the establishment with his unhappy wife, Alice.

Ruling his roost with stentorian authority, Harry bathes in the adulation of his three mindless, pint-guzzling “cronies,” Bill (Richard Hollis), Charlie, and the elderly, hard-of-hearing Arthur (John Horton). (The latter is so reminiscent of character actor Peter Maloney I didn’t realize it was someone else until I looked at my program when writing this review!) Behaving almost like a Greek chorus, they bow in awe before the celebrity Harry has accrued for the many deaths accomplished on his watch. Even Fry (Jeremy Crutchley), a police inspector, is cowed by Harry’s imposing presence. Also hanging out is a cub reporter named Clegg (Owen Campbell), pestering Harry for an interview about his former profession.

In the published interview, which is later discussed, the egomaniacal Harry—reluctant at first to disclose the number—brags about precisely how many people he’s executed. At the same time, he criticizes the numbers put up by the even more prolific Albert Pierrepoint (the memorably imposing John Hodgkinson), his rival for the title of England’s premier hangman. This only further burnishes Harry’s morbid reputation with his hangers-on. Harry’s fatuity, however, will be put to the test when Pierrepoint himself eventually shows up. As they say, give a man enough rope . . .

Before he does, though, Mooney, a young Londoner, coiffed and dressed in slim-tied, Carnaby Street duds, appears. A chain-smoking time bomb packed with Pinter/Orton shrapnel, he’s slick, garrulous, prone to fiery outbursts and machine gun-rapid diatribes; self-described as “menacing,” Mooney’s up to his neck in scheming. In a long, creepily subdued scene, he befriends Harry and Alice’s shy, chubby, insecure, 16-year-old (moved up from the original’s 15) daughter, Shirley. But, having sought to rent a room from Alice, he detonates when she has the audacity to check his references.

The central plot device is the disappearance of Shirley, which may (or may not) be Mooney’s handiwork. It certainly looks like it is, what with the skullduggery being discussed in a café—shown in a setting placed high above the saloon—between Mooney and Syd, Harry’s sniveling, disgruntled, vengeance-seeking, former associate. These things coalesce in a gruesome, wickedly funny, technically clever denouement highlighting McDonagh’s themes of crime, revenge, and punishment in a manner I’ll not describe. Let’s just say that thereby hangs a tale.

Hangmen has its feet in surface realism but, under Dunster’s devilishly clever direction, it swings with theatricality. Although the energy behind the lines occasionally sounds forced, Dunster manages to conduct McDonagh’s pungently witty, thick North Country-accented dialogue (which takes some getting used to) with rhythmic precision and tonal variation. Fleischele’s designs are aided significantly by Carr’s expressive lighting, and Ian Dickinson’s awesome music and sound effects. Nevertheless, this expertly acted Hangmen would be riveting even with a bare stage, unchanging lights, rehearsal clothes, and Foley sounds.

Mr. Allen is chillingly cold-blooded and charismatic as the suspicious Mooney, carrying off his snarky tirades with tour-de-force bravado; Mr. Threlfall is arrogance personified as the bombastic executioner; Ms. Bennett hits all the right notes as Harry’s harried wife, Alice; Ms. French embodies teen insecurity as Shirley. Mr. Nyman is comically convincing as Harry’s former assistant executioner, Syd, fired for expressing his astonishment at the size of a dead prisoner’s “cock,” perhaps the play’s most repeated noun. And Mr. Hodgkinson couldn’t be better as Pierrepoint, furious at Harry’s attempt to overshadow him as a capital punisher. Similar kudos go to the other ensemble members as well.

The Playbill has a page devoted to capital punishment in England, a subject McDonagh wrings for all its gruesome fascination, especially in an absorbing scene where variant methods are described. Macabre as this latter may sound, there’s no question Hangmen is a well-executed piece of capital entertainment. 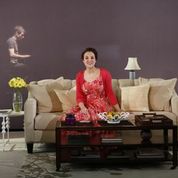 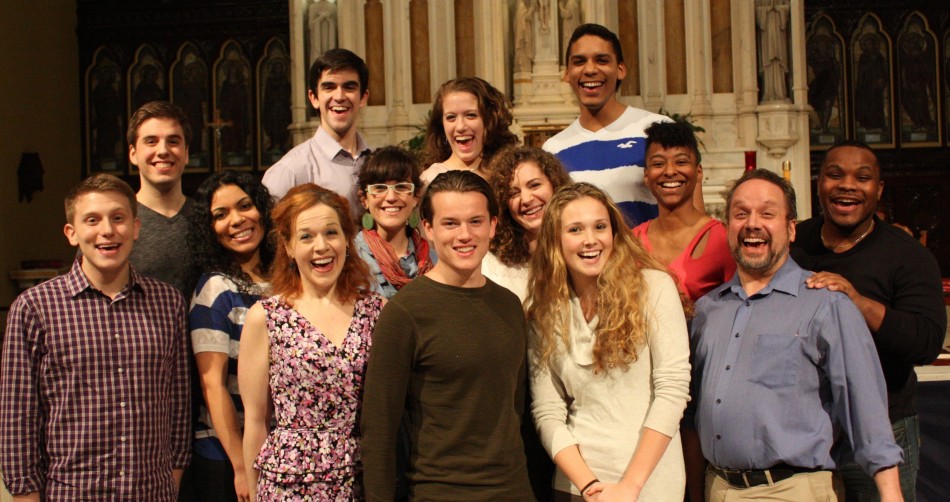 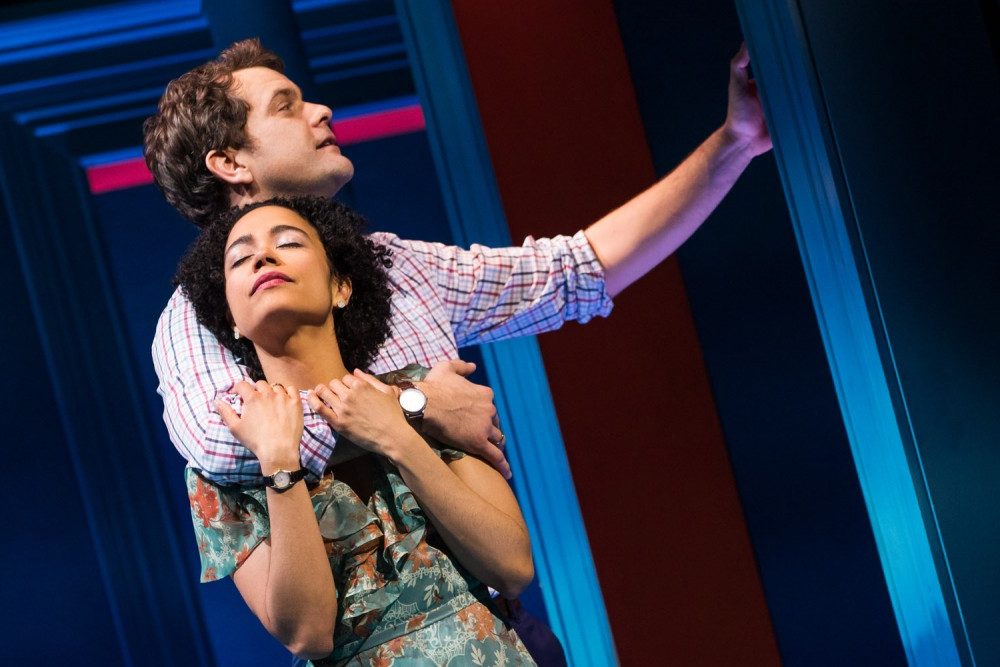